“All the world is made of faith, and trust, and pixie dust.”

Sometimes you just don’t know what you have stumbled into. It was my first week in Mexico and I knew nothing….I mean nothing, not how to ask for a beer or help. I had no latino friends and I had really only eaten Mexican food a handful of times in my life. I had no idea how vast and diverse this country is or that I would spend the next sixteen years learning about it. END_OF_DOCUMENT_TOKEN_TO_BE_REPLACED

Whether you’re buying for family or friends, a Mexican or just a lover of Mexico, here’s a short list of gift possibilities. Most you can find in both English and Spanish, as well other languages. The fascinating and bloody history of this enchanting land has been written about extensively–some books good, some not, some accurate and some not. This quick selection gives you the best from which to choose. END_OF_DOCUMENT_TOKEN_TO_BE_REPLACED 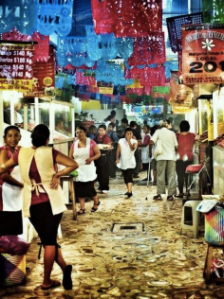 Shopping as a cultural activity? In Mexico, especially in DF, it’s very possible. Just as there’s food on every corner of the city, there are items to buy, customs to learn, and captivating vendors with whom to converse. Shopping in Mexico is much more than just buying—it’s learning about the item’s origin, method of production, variety of uses, and names. END_OF_DOCUMENT_TOKEN_TO_BE_REPLACED

Posada in Spanish can mean inn, lodging, shelter, boardinghouse, home, etc., depending on context. Traditionally in old Mexico, when people were traveling, at the end of the day they would seek a place to spend the night out of the elements. When no inns or hotels were available, travelers would seek “posada” in private homes, asking for their hospitality and kindness and sometimes receiving a meal with the resident family. Often they simply slept on the floor. As the population became converted to the Roman Catholic faith by the Spanish Conquistadors, a tradition developed based upon the Biblical story of Joseph and Mary arriving in Bethlehem on the eve of Jesus Christ’s birth. END_OF_DOCUMENT_TOKEN_TO_BE_REPLACED

Husband and wife Fernando Bolaños and Fernanda Sueldo (no, they say their names didn’t spark their love affair) opened Oaxaca’s first craft brewery about two years ago, coincidentally around the same time that Oaxaca City inaugurated its first artisanal beer store, Bier Stube. Cerveceria Teufel (formerly known as Camarada) has taken Oaxaca de Juárez and indeed the entire country by storm. It’s already won a gold medal at a national competition and congress, Cerveza Mexico. Beyond producing a line of quality craft beers, if you know the right people you can arrange for a beer and Oaxacan food pairing (maridaje) event at the nano-brewery (smaller than micro). Teufel currently produces only about 150 cases a month. END_OF_DOCUMENT_TOKEN_TO_BE_REPLACED

The fiesta of the Virgin of Juquila is one of the most important and with greatest following among the Catholic community of the State of Oaxaca, and even among the faithful of surrounding states like Puebla, Guerrero and Veracruz. END_OF_DOCUMENT_TOKEN_TO_BE_REPLACED

The “separation of church and state” refers to the official distancing between organized religion and the government. Of the three countries that comprise North America only one does not have a law that separates the two institutions. Some may be surprised to learn that the odd man out is Canada. The reasons that each country has their respective policies are historical and the way each deal with religious matters varies considerably. END_OF_DOCUMENT_TOKEN_TO_BE_REPLACED

Religious discrimination might seem like a problem we’ve solved, but in countries across the world, including the US people are still persecuted and abused because of their religious beliefs. One way to fight religious discrimination is by fighting ignorance by learning about religious traditions outside your own. Here are 11 facts about religions practiced across the globe. END_OF_DOCUMENT_TOKEN_TO_BE_REPLACED

Well here we are, one year after facing down the Aztec “End of the World”, December 21st, 2012. A year, that happened, and turned out to be not that much different than any other, generally speaking. END_OF_DOCUMENT_TOKEN_TO_BE_REPLACED