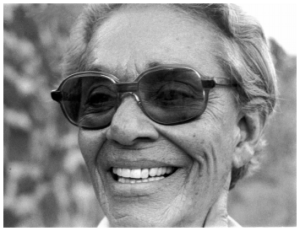 On August 5, Chavela Vargas died at age 93. She had just returned from a trip to Madrid, Spain promoting “La Luna Grande,” her new CD dedicated to the famous Spanish poet Federico Garcia Lorca. “I came to say farewell to Federico, to my friends, and to Spain,…and now I return to die in my own country,” she said in a brief address at his gravesite. She became ill soon after the ceremony, and after 10 days in a hospital there she was brought to Cuernavaca where she passed away. In her lifetime she came to be an icon and a pleasure for those who heard her sing. For those who knew her, she was a unique and eccentric character. Her last words were, “I go with Mexico in my heart.”

Vargas, born Isabel Vargas Lizano (Chavela is a nickname for Isabel) April 17, 1919 in San Joaquin de Flores, Costa Rica, realized as a youth that she was musically talented and loved to sing. At only 14 years old she had come to feel that she had no future in Costa Rica. The conservatism and lack of cultural freedom there at that time was stifling, and she heard that Mexico was much the opposite. She claimed that when the time came to move, she sold some chickens to afford the bus trip to Mexico. Once there she sang wherever they would pay her or she could get tips. Cantinas, parks, and street corners were her venues. The legendary songwriter José Alfredo Jiménez first saw her singing on a corner and soon began what was to be a lifelong collaboration and friendship.

By the 1950s she was performing regularly in Mexico City’s bohemian club circuit, becoming more and more renowned and revered as a chanteuse. Her recording career began in 1961 with her first album, “Noches de Bohemia”. She had also developed a reputation as a gun-carrying hard drinker who dressed in men’s clothing and was notorious for intimate affairs with famous and not-so-famous women, although it was late in her life before she admitted publicly to being a lesbian

Between myth and truth lie stories involving Frida Kahlo, Elizabeth Taylor, Ava Gardner, and even peasant girls carried off at gunpoint. She adamantly denied this last accusation. Her hard drinking was no myth. At one time, following her recovery from alcoholism she claimed that “…there is no decent tequila left in Mexico. Jiménez and I drank it all.” Jiménez died of cirrhosis of the liver in 1973.

The alcoholism and subsequent recovery kept Vargas out of the limelight for 20 years, the first 15 she referred to in her autobiography as “my 15 years of hell.” She kept such a low profile during these years many thought she had finally died from her fast-paced lifestyle. The autobiography, Y Si Quieres Saber de mi Pasado [And If You Want to Know About My Past], was published in 2002. In 2003 she told the New York Times that she hadn’t had a drink in 25 years.

Beginning about 1990, Spanish filmmaker Pedro Almodovar, a devout admirer of her talent, began to take serious interest in her career. Placing both her and her music on the big screen, he was the pivotal influence that brought Vargas to the attention of a whole new generation, and re-enlivened many of her old admirers. She began to perform again due to this increased demand. Almodovar praised her singing style as “the rough voice of tenderness”, and many listeners were again moved by the feelings of loss and longing she communicated in her interpretations of Ranchera, Bolero, Tango, and other Latin music genres. The last half of her career was filled with showcase appearances, including a role in the movie “Frida” in 2002, and a first-time performance at Carnegie Hall in 2003.