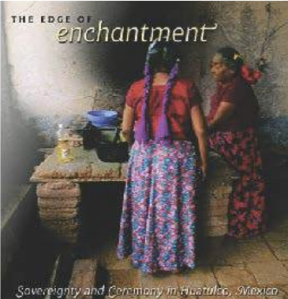 Most visitors to Huatulco know that it has great beaches, predictable weather and some posh hotels and residences. What is less known, is that the entire region is a wealth of history, folklore ancient culture and mysticism.   “The Edge of Enchantment” is an amazing book that invites us into the intriguing world of local native communities. The book takes its name from the indigenous belief that this region is in fact “Enchanted”. The author explains “almost every town and hamlet in Huatulco and Huamulela has its own ‘encanto’, a physical space where a fissure or charm leads to an unknown metaphysical world.”

Alicia Maria Gonzalez along with her photographer Robert Ysais, received grants enabling them to research the work which was published by the Smithsonian Institution in 2002. They scoured ancient records and traveled dusty back roads to uncover the mysteries held by the land and its people. Their research began in an old facility where archives had been put into storage. By a stroke of incredible luck, they stumbled across a package wrapped in turquoise plastic, stashed among piles of old and new papers. Inside the plastic they discovered a stack of misplaced documents dating from the 1600´s to 1900´s. Through these records, land disputes that had gone on for centuries were finally resolved. Finding these documents made them local heroes and opened many doors in the communities that were involved.

Throughout the book native people speak frankly about their lives, traditions, celebrations and beliefs. They also speak about the changes that have occurred. Before 1980 this was a remote region, populated by long established indigenous families and without the means of modern communication or transportation.   Despite the new infrastructure within Huatulco, local people are conservative, the old ways are respected and ancient beliefs and customs have been passed on through word of mouth. This is beginning to change as the elders, who were here before any development existed, are passing away and a new generation is becoming seduced by the modern world. We are indeed fortunate to have this incredible record as a reference. For those of us who have immigrated to Huatulco, it provides an insight into the rather culturally complex group of people with whom we live side by side.

It is not necessary to read the book chronologically. This is a coffee table book that is delightful to flip through, choosing a few pages at a time. Many of the photographs capture the traditional indigenous essence. The reader is surprised to see the date 1997 next to “a young girl combs her hair”, or 2000 adjacent to “Don Valentín with his burro”.   These prints are in sepia tone printed on linen giving them the quality of a bi-gone era. In addition to sepia prints there are numerous color plates depicting both the land and the people who have told their stories.

Some of the vignettes are heartwarming others humorous and a few are down right bizarre. Of the later my favorite is the “Feast of St. Pedro” in Huamulela. This may be the oldest continuous oral documentation of the history in the region and it requires weeks of preparation including the capture of a live alligator. It may also have been a favorite of the author’s since a photograph of the ‘Alligator Princess’ adorns the back cover.

The feast includes an annual pageant with various groups elaborately masked and costumed.   These include Chontal natives, Christians, Moors, pirates, Spanish lords, fishermen and men dressed as women. Each element represents people who came and tried to claim the land. Every incursion and land sale is depicted through music, dance and drama as the pageant continues, along with the feasting for several days. During the festivities a mass is held where the Alligator, believed to be a Princess, is carried into the church dressed in a christening gown and baptized. Later she is dressed in white and everyone wants to dance with her before she is taken to the town hall to be married to the Chontal king (who is represented by the ‘mayordomo’, this year’s patron). It is believed that the ‘Alligator Princess’ was the original rightful owner of the land and by marrying the king she gives her land to the Chontal people.

“The Edge of Enchantment” had only one printing and was available primarily through the Smithsonian. It should be available in every gift shop and in every hotel in Huatulco but those of us who live here have accepted that “a lot of what should be simply isn’t”. Fifty copies of the book have been acquired and are available at Café Juanita in Santa Cruz for 700 pesos each.

Brooke Gazer operates a Bed and Breakfast in Huatulco. www.bbaguaazul.com