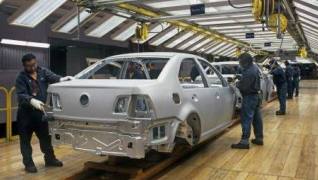 Mexico is number 8 in world auto production as of 2012, and is poised to displace number 7 Brazil in the near future. Some of the newest, most modern and efficient auto assembly plants in the world are located in Aguascalientes, Toluca, Hermosillo, and Guanajuato. The auto industry of Mexico provides 56,000 jobs, 21.9% of the country’s exports, represents 18% of its manufacturing GDP (Gross Domestic Product), and is growing at a steady rate.

Geographically, the Mexican auto industry is considered in three “clusters”. The Northern Cluster includes automotive majors like the states of Baja California, Sonora, Chihuahua, Tamaulipas and Nuevo León. The Baijo Cluster includes Zacatecas, Jalisco, Guadalajara, Michoacan and Silao (in Guanajuato), and the Central Cluster includes the states of Morelos (primarily the Ciudad Industrial del Valle de Cuernavaca—Civac), Puebla, Cuautitlan, Hidalgo, Toluca and Tultitlan. Some areas are heavily involved in stamping and final assembly, and some are concentrated more on parts production and supply. Besides the availability of an intelligent, industrious workforce, another strong advantage of producing vehicles in Mexico is its proximity to the largest market in the world, the United States. Transportation to the U.S. markets is, relative to most auto-producing countries, fast and cheap.

The first cars arrived in Mexico D.F. in 1903 when they officially tallied 136. By 1906 there were 800. In 1910 Mercedes-Benz and Renault built small assembly plants there at the request of then President Porfirio Diaz, primarily to provide vehicles for the government, but these endeavors were only to survive a few months due to the overthrow of the Diaz dictatorship and the ensuing revolution. Buick, in 1921, became the first auto producer to become established in Mexico, followed by Ford in 1925.

Through the following years, more and more automakers established Mexican sales outlets and organizations. In the 1960s, the autoworkers’ unions made gains in the struggle for autonomy and self-rule, and the Mexican government passed regulations that required auto companies to assemble cars in Mexico that were to be sold in Mexico. Immediately Mercedes, Fiat, Citroen, Peugeot, and Volvo withdrew, leaving American Motors, Renault, Volkswagen, Datsun and Borgward, as well as “The Big Three” from the U.S.; Chrysler, Ford and General Motors. Taxes on automobiles were increased during the latter part of that decade and the Mexican auto industry was slowly in decline. For all practical purposes, it wasn’t until the late 1990s that things began to turn around.

In 1995 Mexico annual auto production was 935,017. By the end of the year 2000 it had reached 1,935,527, and in 2011 it was 2,680,037 units. The excessive taxes on vehicles had been reduced or eliminated, and with it’s eye on the future, Mexico had invested in education. Mexican schools and universities now graduate about 90,000 engineers and technicians a year; more than Canada, Germany or Brazil. The quality of its available workforce bodes well for any manufacturing country, and Mexico’s workforce is considered exceptional.

In March of 2012, President Calderon was in Hermosillo to announce Ford’s $1.3 billion investment in their plant there. He said, “Mexico, besides being good at manual labor, is being very good in intelligence (and) operations in our youth’s know-how when applied to work.” Ford is building their latest generation Fusion at this award-winning plant, and expects the new 2013 Fusion to out-sell the competion in its class, which includes Toyota Camry, Honda Accord and Nissan Altima, to become the best seller worldwide.

There are 42 automakers making a total of 400 models in Mexico at present, and most importantly, the quality of these models are considered the best, or equal to the best produced in the world.

So basically, it was just like a games console…but REAL!

What people listened to on long trips before this is beyond me!

So where are all our milk cartons disappearing to?

behind the wheel. I think the other 10% are lying…

Luckily only 3 of these were ever produced