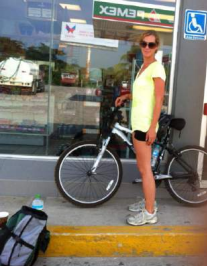 Things you should know about me regarding the following journey, I am very destination oriented and I don’t like to exercise. On being destination oriented….when I was 12 I developed a routine of riding my bicycle from Westmount along the Lachine canal to Old Montreal. At my destination I would purchase a small strawberry slushy and ride home. Now they sold the exact same slushies on our corner but it wasn’t the same. When I rolled up one day to find the little depanneur in Old Montreal had stopped selling slushies, my bike adventures along the canal came to an end. As for the exercise bit, well I like using my body; tennis, golf, yoga and of course biking, but just don’t tell me I am doing any of it for exercise. In my bucket list fantasy of running the New York marathon I never really think about the training or even the running. My mind rests on the fantasy of traversing the 5 boroughs of my favorite city and ending in Central Park, receiving one of those silver tin foil like blankets and then of course I am in NYC so a great dinner awaits. So when I decided to ride my bike from Santa Cruz Huatulco to Zipolite I thought about my arrival. I made plans with friends and booked a cabana. I didn’t pack any snacks, have a fancy water bottle or even get my bike tuned up. Are you rolling your eyes yet?

I started out early on a Sunday morning in August with a cheap backpack I had picked at Salina Cruz’ new Walmart. I do not know how to change a bike tire or own any cool biking clothes and my bike is a mountain bike not a road bike. Off I went. I was tired before I even reached the highway but seeing a Fonatur worker sitting on the curb eating some tacos I shouted out ‘Provecho’ and got a kind smile and wave in return which gave me some energy.

The curvaceous highway was fairly quiet. Traffic tends to come in clusters and I would ease to the side and let the 5 or 6 cars pass and then have 10 minutes or so of road to myself. I was wearing a fluorescent yellow t-shirt so I could not be missed.

I have travelled the road between Zipolite and Huatulco hundreds of times; I have done it by car, truck, taxi, 1st class bus and microbus. As I biked I saw familiar landmarks and was able to gage how far I had gone.

The sight of the airport fence was another highpoint. “Almost at the airport! Woohoo!” I pulled in at Oxxo for my morning coffee and immediately met two French travellers who were spending a month driving through Mexico. They too were on their way to Zipolite and I was able to direct them to some of my favorite spots and give them a copy of The Eye I had stashed in my backpack.

From the airport to Coyula was a breeze- almost all downhill and my heart soared at the feeling of freedom and total independence. I shouted into the trees “Thank you Universe”- seriously! Beyond Cuatunalco the obvious dawned on me- I was alone and I could stop wherever and whenever I wanted. I pulled into the Comedor Las Flores where on one side was a merry band of borrachos- hard to tell whether they were just getting started or finishing off Saturday night. No one looked at me like I was crazy as I rolled in. Smoke billowed out of the kitchen and smelling the fresh tortillas I knew I had stopped in the right place. I explained what I wanted, a tortilla with asiento, beans and cheese. It was perfect, served with fresh salsa casera and a café de olla. Oh yes this had been a great idea!

As the day wore on the sun and the hills beyond Puente Aguacate almost got the better of me. My individual body parts began speaking up, my right thigh said to the left ‘what is she thinking’, my ass said ‘you call this seat cushioned?’ , my hands make it clear they would have appreciated some of those nifty biking gloves but really would have preferred air conditioning and a manicure. My heart however said ‘press on, you can do this….your destination awaits’ and so I did. Anyone who tells you Pochutla is nothing to see has never arrived by bicycle. It was glorious.

When I arrived in Zipolite I went straight to the Alquimista, I checked into my lovely beach cabana, slipped on my bathing suit and ordered an agua de limon. It was an amazing afternoon with old and new friends, the ocean and a well-deserved dinner at La Providencia. That night I slept like the dead. The next morning as I drank my coffee and watched the sunrise I was surprised at how I was barely sore. My body forgave me this indulgence. Everyone I met was incredibly kind, supportive, kids waved and not one car had come even close to running me off the road.

The only thing to decide now is, where to next?