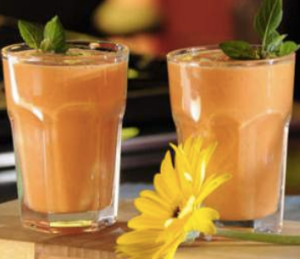 The mamey doesn’t look much like a fruit. From the outside it resembles a small, ancient cracked leather football. It’s outer surface more like bark than peel. As a matter of fact, its exterior is so hard, you couldn’t peel it if you tried. You’ll need a knife to get into its soft, slimy, salmon colored flesh. If it weren’t for the sweet flavor of this fruit, it would remind you a lot of an avocado, once you’ve cut it open.

And, speaking of its sweet flavor, it is wholly unique and extremely difficult to describe. Failing miserably at coming up with a sufficient description myself, I turned to the all-knowing internet. It seems I am not the only who has struggled to articulate this delicate flavor, but I did find two descriptions that came close. The first, likened it to a sweet potato flavoured with dates. The second, said it tasted like a combination of sweet potato, pumpkin and cherry underscored by hints of honey and vanilla.

With that flavor palate in mind, it is easy to see why one of the choice ways to eat the mamey is in a milkshake! But, it has also been traditionally made into jams, baked into sweet breads, turned into yummy puddings and even added to traditional flan to give it a delicate, earthy flavor.

If your not convinced to try this high-fiber Mexican fruit based on flavor alone, then maybe its nutritional value will tip the scales for you. A one-cup serving of mamey is packed with more than 60% of your daily value of both vitamin C and B6. You will also get vitamins A, B1, B2, B3, and B5 from munching on mamey. Add to that several essential minerals including zinc, iron, phosphorus, manganese, and believe it or not, copper. Its texture may seem rich and creamy, but surprisingly mamey is low in both calories and fat, but as a bonus also contains protein!

Its nutritional value makes mamey a super food for lowering cholesterol, high blood pressure and maintaining cardiovascular health. And, because it is high in both soluble and insoluble fiber it helps promote weight loss. While the insoluble fiber takes up space in the stomach, making you feel fuller, the soluble fiber slows down your digestion; a one-two punch against putting on the pounds.

But, for me, more interesting than what mamey can do for you inside your body, is what it can do for you outside your body. Here in Mexico, the large, shiny brown seed at the center of the mamey is used to produce long, shiny brown hair and lashes. Once the seed is extracted from the fruit, it can be dried and the hard exterior ground into a powder that women apply to their hair and eyelashes to promote long and healthy growth. In other Central American countries the natives have been known to extract the oil from the seed and also use it as a hair growth tonic.

So, the next time you find that strange football-like fruit hiding, unappealingly, among the other bright and colourful fruits at the market, take a chance and take it home. If it doesn’t appeal to you as a food, at least you may get the benefits of healthy hair and long lashes!

Start by adding the liquid to your blender, followed by the soft fruit. Blend on high for 30 seconds or until the smoothie is creamy.

Soak the almonds in water overnight or for at least 6 hours.

Drain the water from the almonds and discard. Blend the 3 cups of water, almonds and dates until well blended and almost smooth.

Strain the blended almond mixture using a cheesecloth or other strainer.

Homemade raw almond milk will keep well in the refrigerator for three or four days.