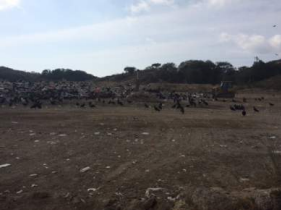 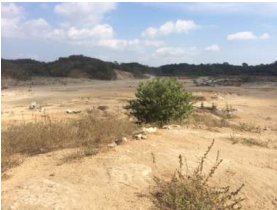 In my absence from The Eye meetings my fellow writers at The Eye decided I was the best suited among them to revisit this topic, so I have updated the article I wrote for The Eye last year. (“Recycling in Huatulco,” April 2014)

Last March, Fonatur in conjunction with the municipality of Huatulco, the Green Team, the Hotel Association, and CONAGUA, launched their groundbreaking program of residential pick up services along with the first phase of the expansion of the wastewater treatment plant.

This year my investigative journalism journey started at the big pile of plastic bottles behind the greenhouses in Sector T’ which continues to be operated by ‘Infusión Plástico’. Their trucks pick up the bottles at the landfill, move them to the site in Sector T, and then haul them off to Puebla.

Fonatur still has the yard on the canal street (Guelaguetza opposite Vialidad 5) , and they still sort material brought in independently, although the gate guards did not know any details regarding their ultimate destination.

The residential pick up service continues with varying schedules depending on the neighborhood and type of development. In Santa Cruz at the harbor, pickup is Monday – Friday, while next door in Sector E, it is Monday – Saturday.   In Residencial Conejos it is Tuesday, Thursday, and Sunday. The service is free. It is done differently in different neighborhoods. In some places, everything is collected on the appointed day by two trucks in tandem. One truck collects non–recyclable waste, including organics, while the second truck separates glass, plastic, aluminum, cardboard, Tetra Pak (coated paper milk and juice containers), and polystyrene. In other neighborhoods, pickup service alternates between trash (which includes organic waste) and recyclables. We put out two broken plastic chairs (a very common sight in Mexico), which they did pick up. Around town, including Santa Cruz and Super Che, one sees separate containers labeled organic and inorganic, bottles, and cans. In some places in the First World USA we pay to recycle and they come every two weeks. They only take aluminum cans, bottles, newspapers, and magazines. Go Huatulco!

Last year I went out to the Fonatur owned and operated landfill to see where recycled and non-recycled material were handled, what was buried etc. I recently went back out to the dump and found it much cleaner than last year, even more picked over. There are still maybe a dozen small sorting areas of primarily cans and bottles, each with a shade structure or umbrella and people actively sorting material. Bags of plastic bottles and flattened cans dominated the waste; as in last year, I did not see where organic matter was being composted, buried, or left to rot, nor stacks of plastic chairs or cardboard. Compared to last year there are smaller populations of black vultures and dogs, and fewer safety officers or workers wearing safety vests. A bulldozer was operating on the eastern side of the landfill. Numerous pipe stands with supporting wire encased rock columns continue to vent methane and other gases produced by buried material so that fires don’t occur. I do believe the stand pipes are also used to set grade so the dozer knows where to move the fill material. What is new at the landfill are the baseball field, and the fact that the landfill will be relocated.

I am not clear as where the new landfill will be moved, but the discussion dates back at least five years (for Spanish readers check out: http://publimar.mx/?p=1890). The current location is too close to the National Park and the Maguey/ Cacaluta watershed, and does not use current technology (that is another discussion). It is also too close to groundwater, with obvious potential for contamination.

A proposal for a new type of park on the existing landfill is being circulated. The present title translates roughly as Eco-cultural Park for Animals. Major components include an animal shelter for rescued wildlife, control of dogs and cats (particularly street dogs; presumably sterilization), education, research, restoration (revegetation), and a native plant nursery. Further it is proposed that it be operated by the local cooperatives, of which there are a number that support this proposal. It is meant to be self-sustaining, and green, of course. I assume that as this proposal develops, studies such as water quality sampling, methane production, and other analyses of potential toxins will be conducted.

Throughout Huatulco, locals recycle materials in all kinds of clever and creative ways, from Norma Perez’ lovely cardboard painted shelves at the Organic Market, to the plastic bottle garbage buckets seen in Pluma Hidalgo and Derramadero.