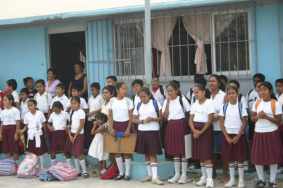 Women’s role in education in Mexico, as elsewhere in the world, has been a slow and difficult process, as students and as educators.

Until the 1930’s, during the Presidency of Porfirio Díaz, education for women was frowned upon and criticized, even by some women of the middle class, who considered that challenging the traditional economic dependency on men was synonymous with ‘feminism’.

In 1907 women were finally allowed into the Escuela Nacional Preparatoria and Escuela Secundaria but the curriculum was very different for the two upper education schools. At the Escuela Nacional Preparatoria a scientific program included mathematics (arithmetic, geometry, trigonometry, and calculus), natural sciences (cosmography, physics, geography, chemistry, botany, and zoology) and the more abstract subjects of logic, ideology, and morality. Languages ​​were interspersed throughout the curriculum. In the Escuela Secundaria, a decidedly different program for women included: literature and writing (correspondence) grammar; basics of algebra and geometry; physical and political geography; history; bookkeeping; first aid; hygiene and housekeeping; duties of women in society; duties of the mother in relation to the family and the state; drawing; languages ​​(French, English, Italian); music; arts and crafts; horticulture and gardening. Upon completion of these studies women were eligible to become teachers, as long as their role in the household was not compromised.

In the 1930’s, under the ‘presidency’ of Porfirio Díaz, women finally achieved better representation and participation in the upper education system, concurrent with their entry into the labor market and nascent political activism.

By 1970, according to a census I read, primary school attendance was similar between girls and boys but the gender gap increased with higher education and by 1977 the enrollment of women was only 27%. Unfortunately, by the 1980’s support for public education in general actually decreased with lower salaries for teachers, lower investment in education, and fewer graduates from high schools and universities. Women only represented 30% of students in higher education and mostly in fields generally associated with women at the time, such as health care and social sciences, as opposed to the ‘hard’ sciences such as engineering, overwhelmingly dominated by men. In the 1990’s and into the new millennia women achieved about 47% of representation in higher education, but continued in the ‘softer’ fields of humanities, health, social sciences, and administration.

Then there is the subject of the percentage of women teachers in the work force. It is a bit of a stereotype that women dominate the field, especially at the lower grades, and it was certainly true for me in the United States through high school (but the opposite in undergraduate and graduate school). It was also the case in Mexico during the last century. Today in Mexico there are approximately 1,842,900 teachers. Of these, the vast majority (1,439,000) teach in the public sector and only approximately 403,000 in private institutions. While 51% of secondary school teachers are women, only 34.7% of directors are female. Similarly, on average, while the male only represents 49% of teachers, 65% of high school principals are men. However the percentage of women in secondary education has risen to 55%.

Last Christmas I had the opportunity to attend a posada at the new Conafe (El Consejo Nacional de Fomento Eduactivo) rural school on the outskirts of Santa Maria Huatulco to celebrate Christmas as well as the teachers who teach the teachers (CONAFE teachers are not part of the very large and powerful teacher’s union #22 known for its protests and demonstrations). The numbers seemed roughly split between girls and boys/men and women.

The teachers union, the Sindicato Nacional de Trabajadores de la Educación (SNTE) represents, by far, the dominant group of educators with more than 1.4 million members and the largest union in Latin America. Its once incredibly powerful former leader is a woman (Elba Ester Gordillo) who remains in jail on corruption, money laundering, and embezzlement charges. Prior to her arrest in 2013, a short two months after the Presidential election of Enrique Peña Nieto, she seemed unsupportive of women’s issues and their participation in government, blaming the abysmal state of education in Mexico on working mothers. Although I could not readily find statistics regarding the percent of women in the teacher’s union, salaries are supposedly equal between the two genders. While women as a group are not especially organized in the union they indeed play a role in determining policy. Reinforced by the constraints of family life, women who provide the majority of educational services still have had little access to power and direction of education through the union. Although Gordillo seemed to be the exception, her abuse of power and seeming disinterest in improving education in Mexico in part lead to her downfall. However teaching for women in Mexico continues to be more lucrative than other fields of employment.

The 15th of May is National Teacher’s Day in Mexico. Regardless of gender.