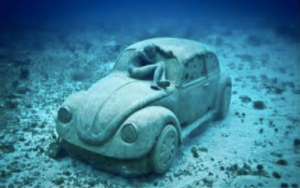 According to Carlos Candelaria Silva, a science investigator at UNAM, Mexico City, Huatulco’s reefs have deteriorated due to pollution and tourism, especially at La Entrega and San Augustin. Although the Oaxacan coast does not have a barrier reef like Australia, and Mexico/Belize/Honduras, the smaller reef systems are precious ecosystems. They are the ‘nurseries’ where reproduction of hundreds of species occurs. I have not been back to La Entrega since we first came to Huatulco in 2007, and from the overuse it gets, I am sure I would be depressed by the extent of its damage.

We should all be aware by now that coral reef health is declining worldwide for the same reasons as LaEntrega, but also due to climate change and warming ocean temperatures. The coral becomes bleached as elevated temperatures, and solar ultraviolet radiation have caused the die-off of symbiotic algae (i.e., bleaching) in corals and other critical symbiotic invertebrates.

So artificial reefs, what are they, why are they being built, and do they work? 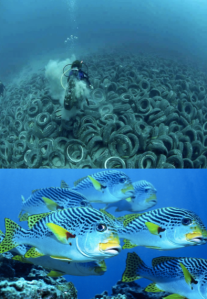 One method is to sink old material that has lost its usefulness, like ships, trains, and cars, which would otherwise just be landfill material. Having dived old shipwrecks, they can become a great habitat for numerous species that take advantage of hiding places and new surfaces for sponges, coral, barnacles, etc. to colonize. In Florida, as early as the 1950’s, all kinds of materials were used to create habitats, such as railroad cars, school buses, car bodies, stoves, refrigerators, tires, and even porcelain fixtures were used to create artificial reefs, or more cynically dumped junk coincidentally created habitat. More current techniques use ship hulls and more permanent features, without the associated contaminants of the past they are more carefully placed, and can be used for erosion control and to protect shore zones. Still, deterioration can result in the increased production of toxins while attracting large schools of desirable fish and can make them an attractant to commercial fisherman.

However, they are no substitute for the naturally occurring systems, and the artificial reefs won’t sustain diverse ecosystems with continued pollution and warming seas.