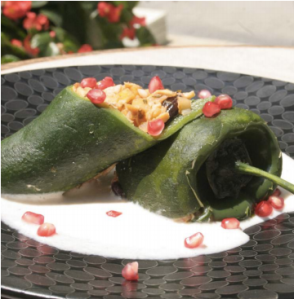 There’s just no stopping Oaxaca when it comes to culinary greatness, and the uncanny ability of residents, including chefs, to take signature dishes from other parts of Mexico and elevate them to new gastronomic heights. Borrowing from Puebla is a case in point. As the recipe below reveals, while Puebla is credited with the origins of chiles en nogada, Oaxacan chefs are now stealing Puebla’s thunder. But it should come as no surprise. According to legend mole too was first developed in Puebla; yet in modern times it’s Oaxaca which has the reputation for producing the best of these complex sauces ranging from mole negro, to verde, to amarillo and others.

Historians and experts in Mexican gastronomy are essentially consistent when recounting the origins of chiles en nogada, although the complete story is open to conjecture. It appears that either the Monjas Claristas or the Madres Contemplativas Agustinas of the Santa Monica convent in Puebla, first prepared chiles en nogada. Local seasonal ingredients were used to create the dish for Agustín de Iturbide in August, 1821. He was en route to Mexico City from Veracruz after signing the Treaty of Córdoba, and stopped in Puebla to be there on his th saint’s day, August 28 .

The other undisputed “fact” is that chiles en nogada is most often prepared in Mexico around the time of Mexico’s independence, September 16th , as a meal symbolic of patriotism, since the stuffed green poblano chile, topped with a white walnut cream sauce, and garnished with red pomegranate seeds, together represent the colors of the Mexican flag.

Some have accurately commented that the traditional season for making and eating chile en nogada in Mexico is August and the first half of September. Indeed, celebrations of Mexico’s independence occur beginning late summer and continue into September. But one writer’s statement that chiles en nogada are available “only from July to September,” is inaccurate, just as the commentary that chiles en nogada are “only served for the several months that the ingredients are fresh.” In fact the odd recipe calls for dried fruit, suggesting something may be amiss.

And then there’s the walnut. “Nogada” is derived from the Spanish word “nogal,” or walnut tree. Why does another socalled Mexico expert state that the stuffed chile is covered with a pecan sauce? Yes, pecans can be used as a substitute, but the traditional recipe calls for walnuts. The same author curiously states that chiles en nogada “is available in late August and September, timed for the annual walnut harvest and Mexico’s Independence Day.” The importance of the walnut harvest is debatable. For example some have tied chiles en nogada to the “seasonality of the pomegranate,” yet in many parts of Mexico, Oaxaca included, pomegranates are available fresh-off-the-tree, year round.

So in Oaxaca the pomegranate is harvested 12 months a year, and walnuts are available year round. Since the recipe’s use of the latter is primarily as an ingredient in the cream sauce, availability of freshly picked walnuts should not make or break the quality of chiles en nogada.

But the seasonality of other key ingredients, such as local apples and peaches from Oaxaca’s Sierra Norte, impacts the quality of the finished dish. As acclaimed Oaxacan chef Pilar Cabrera notes, the fresh fruit enhances the overall taste and texture of chiles en nogada prepared during the summer, and into autumn.

In Oaxaca chiles en nogada can be found on restaurant menus 365 days a year. It’s a popular dish at Restaurante Azucena Zapoteca located in both downtown Oaxaca and San Martín Tilcajete (of alebrije fame). In Oaxacan households, chiles en nogada are prepared if it happens to be a favorite of one’s spouse, child or an invited guest. Finally there’s Chef Pilar who includes the plate on one of her cooking school menus – again, 12 months a year:

Chiles:
Roast the chiles (see Note below) Drain well and pat dry with a paper towel. Set aside.

Sauce:
Soak walnuts in boiling water for 5 minutes; drain and peel off papery skin. Place in bowl and cover with 1 cup of milk for 1 hour. Remove walnuts from milk and then purée in blender with the cream, the remaining ½ cup milk, sherry, cheese, sugar, and salt. Refrigerate.

Filling:
Heat oil in large frying pan. Add onions and garlic; sauté until transparent. Add tomatoes. Stir constantly for 4 minutes. Mix in all the fresh and dried fruit and almonds; cook on medium heat for 5 minutes. Shred chicken and add to the above. Season with salt; cook uncovered on low heat for 10 minutes or until fruit is cooked and sauce has thickened. Set aside, allowing to cool.

Final Preparation:
Stuff each chile with filling, making sure the chile can close. Pour walnut sauce over the chiles, on individual plates, then sprinkle with pomegranate seeds and garnish with parsley sprigs. Serve at room temperature or cold.

Note: Roasting and Opening Chiles: Hold chiles over open flame or gas stove element with tongs. With electric stove, place on cookie sheet under broiler. Rotate until chiles are almost entirely black. Place blackened chiles in plastic bag, allowing them to “sweat” for about 5 minutes. Use plastic gloves before handling chiles. Take chiles from bag and place on paper towel. With gloved fingers remove skin. Score chiles halfway around stem and down one side (T – shape). Open chiles and remove all seeds and veins, but for spicier result leave in a few seeds and veins. Remove gloves and wash hands well. Chiles are now ready for stuffing.