When you live in a metropolis such as New York, Paris, Shanghai, London, or Mexico City, you expect the annual procession of visitors: new ones curious about a grand old city and the usual suspects who return each year because they love the ambiance and energy. It isn’t difficult for you as a host because you know their interests regarding music, art, food, and adventure, as well as their stamina and personalities. You have a history with them.

This year my granddaughter Carys (happily, rhymes with Paris) received a generous birthday gift from her parents: a trip with mom to visit grandma in Mexico City. After my elation wore off, I thought “What will we do?!” Carysis 11, active in five sports and super witty and smart, with a preteen’s energy. I didn’t imagine that hours roaming the Museum of Natural History, sitting through a five-hour Wagner opera, or lounging for hours at a sidewalk cafe would be her cup of tea. I started by asking friends with grandchildren of similar ages for ideas. And to my surprise (though I’m not sure why), Carys herself checked the internet for “fun things for an 11-year-old to do in Mexico City.” Ah, my saving grace!

Together with her mother, Erin, an adventurous, satisfying, and felicitous five days was had by all. Here are a few specifics… 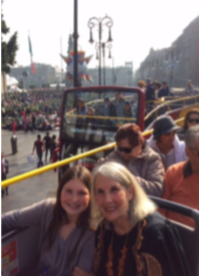 The most popular activity and tour of the week was one I knew nothing about. Carys found it on the internet. The Segway tours turned out to be a wonderfully fun way for her to see the various monuments and landmarks of the city (probably because she was having such a good time on the Segway scooter she didn’t realize she was on a city tour).

The company provides three choices in Mexico City: Polanco and Chapultepec Park, Reforma, and Centro Historico. Each of the three sessions lasts from one-and-a-half to two-and-a- half hours. The guides are bilingual and exceptionally amiable. We were lucky to have Oz guide us through Chapultepec Park, pointing out significant historical statues and fun facts about the city, all while zipping along the sidewalks and lateral roads as well as off-road in Chapultepec Park itself at a leisurely yet quick pace.

Carys was so thoroughly enchanted that we called the next day and booked another tour. She says “It was so cool to see the city on the Segways. We got to see the park and the whole of Reforma in a couple of hours. I’d highly recommend it to anyone traveling to Mexico City, especially with kids!”

Erin, her mother, concurred, saying “I loved the time we spent in Chapultepec Park. At twice the size of New York’s Central Park, it has so many enchanting areas to discover. The Segways allowed us to explore the part of the park near the small lake in an efficient and fun way. I think we could have spent each of our five days there and still not have seen it all. With a zoo, an amusement park, boat rides, museums, and a castle, it is definitely not to be missed!”

Segway Greenway tours are located at Homero 530 in Polanco, with a lovely café located adjacent for grandparents who prefer to sip a cappuccino or a tea (I recommend the cherry infusion) instead of riding the streets. Call ahead for reservations (5292 2414)

About 40 minutes outside of DF lies one of the most spectacular sights in the Western Hemisphere: the pyramids of Teotihuacan. The history of its inhabitants is little known, but research continues to understand the culture that lived there about 2000 years ago. For active children, the pyramids provide an outlet for energy while at the same time learning a bit of Mexico’s history. I do not recommend a formal tour for children, but rather a stroll through the ruins with a small guidebook, highlighted by climbs up the pyramids. Carys ran up and down each one, including the challenging and ominous Sun and Moon. There are lots of interesting souvenirs to buy, our favorite being a whistle that makes the sound of the jaguar.

Carys relates the experience from her point of view: “My favorite part of the trip was the pyramids. I liked learning the history of them and I think it is strange that we still don’t know much about who made them originally. I also liked learning that Mexico City used to have canals like Venice. I wonder why the Spanish got rid of them.”

In order to conserve energy and for scheduling flexibility, from DF I usually hire a private taxi (I have a personal recommendation should you want it) that waits until you’re ready to return. The Turibus runs daily tours to the pyramids, but of course you’re at the mercy of their scheduling. There’s also a public bus that leaves from Central Norte de Mexico, not surprisingly the most inexpensive way to go. Guides are available at the site should you wish a formal tour.

On the cultural front, the Ballet Folklorico is a must for young and old alike. Erin describes it as “an enchanting experience.” You may have seen folk dances before, but never like this. The colors, music, precision, and spirit of the dancers will energize your day. Their songs and dances tell the history of the Mexican people. Erin and I both recommend if you’re taking children that you follow in our footsteps and attend the Sunday morning concert at 9:30am. The concert is two hours without intermission, a bit long for the little ones, but worth it. Other performances start at 8:30 pm on Sundays and Wednesdays. Another outstanding feature of the ballet is that it’s held in the most beautiful building in Latin America–the Bellas Artes, located in centro historico, right next to Alameda Park. The curtain inside the theater is made of Tiffany glass, the seats are comfortable, and the ambiance unequalled. As Erin said, “It is the perfect setting for the ballet.”

Other cultural activities for kids are held at the Auditorio Nacional and the Lunario behind it. Mario Ivan Martinez combines songs and stories for all occasions, so if you can arrange to see him it is well worth it. The performances are given in Spanish, but Sr. Martinez has an international way with children, and he speaks perfect English besides.

Ride atop the double-decker big red bus, touching the treetops through the zocalo, down Reforma Avenue to Polanco and back. The sun, fresh air, roadside flowers, and hustle and bustle below make this an excellent way to get an overview of the city’s center. Turibus also offers excursions to other parts of DF and beyond.

Deciding where to eat is exceedingly easier with children than adults (who usually say generously, “whatever you suggest”). They love stopping for elotes and churros on the street. One thing about Mexico: there is never a lack of food or music. There are many Italian restaurants for the kids’ favorite pasta dishes, as well as hamburger and taco joints.

In the course of five days, we barely touched the surfeit of things to do in the city. If you have more time, consider going to the Papalote Children’s Interactive Museum in Chapultepec Park as well as La Feria, the amusement park located there. There is a Six Flags located south of the city. The Museum of Popular Art in the centro is a gem of a spot, and often on Saturdays and Sundays has special programs for children. My Mexican friends always recommend the floating rafts of Xochimilco as an enjoyable day, though I personally find it touristy and tedious.

One of the wonderful and generous things about Mexico City is the discounts offered for oldsters, youngsters, and students. Erin agrees: “I love that Mexico makes so many of its museums and monuments free to children under 12. It is wise to encourage youth to discover the history and treasure of their great country.”

The joy of small things intrigues us always. Carys loved the freshly squeezed mandarina juice I served for breakfast each morning, the Turin mint chocolates that awaited her on the coffee table daily, and my newly purchased piano on which she composed new tunes.

It’s easy to have fun in Mexico City—even easier with an enthusiastic 11-year-old!