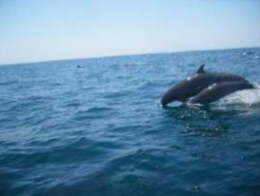 Recently a proposal has been put forward to develop a commercial aqua center in Chahue which would allow tourists to swim with dolphins. For many people this is a lifelong dream and the newly proposed attraction could bring high end tourists who are willing to pay for the privilege. But is this something Huatulco wants to be a part of? If the general public understood what it truly means to imprison dolphins, I believe that most would shy away from this attraction.

While using any emperial tool for measuring intelligence among dolphins is impossible, they are believed to be second only to humans, even more sophisticated than apes. These majestic creatures have the ability to use tools; they form highly complex social networks with discriminating relationships, and have advanced communication skills including language. Traveling in pods which they remain in for life, they engage in cooperative hunting and child care with precise memory such as who owes them a favor, who is a friend and who is not. It has been proven that they possess emotions including joy, grief, frustration, anger, and love.

When you see dolphins preforming tricks and stunts, or allowing humans into their tank to swim, do not assume they are enjoying it or doing it willingly. These enormous animals have furious appetites. An adult weighing 250 KG (550lbs) requires between 10-22 KG of fish per day. They are quickly taught that if they do not preform they do not eat and dolphins are nothing if not adaptable. Their smiling appearance is a deception of nature; it does not indicate a happy animal. A dolphin dies with a smile on his face.

On the topic of dying, a healthy bottlenose lives for an average of forty years in the wild, but five years is the average in captivity. A marine park cannot meet the complex physiological and psychological needs of a dolphin. With a high infant mortality rate for dolphins bred in captivity, their populations are not self-sustaining. Methods of capturing and transporting dolphins are extremely cruel, many are killed during the “hunt” and others die of shock and injury during transport.

Consider what it must be like for one of these highly intelligent social creatures to be placed inside a pen, even a nice one like the proposed lagoon in Huatulco. A normal day for a free dolphin would include swimming up to 100 miles, deep diving, frolicking, hunting, and communicating with family and friends he has known all his life. When the sea turns warm, as it does in Huatulco every spring, they dive to great depths where the water is cooler. They also migrate to cooler water, just as many of the “seasonal residents” of Huatulco do. Sea pens close to shore are shallow, become too hot, and cannot accommodate diving more than a few meters under the surface.

These mammals need more than space, they also require companionship of their own kind, the ability to interact in fluid, complex societies, which in many ways are similar to our own. Imagine being captured by aliens and torn away from your family—some are left behind, a few are taken with you; you cannot see each other but you can hear their cries. You are locked in a cell and there is nothing you can do. The mental, emotional and physical stress that a captive dolphin suffers can weaken its immune system, which makes it prone to disease, not to mention severe depression.

Like humans, dolphins are accustomed to interacting with other dolphins on their own terms, and, in their pod, they choose the dolphins with whom they prefer to associate.   In a “dolphineria” they are forced to entertain humans for hours on end. There is no choice as to who will be allowed to swim next to them or to cling to them. This contact can be stressful and damaging both physically and mentally. Abrasions to the dolphin’s sensitive skin occur from jewelry, finger nails, a button or even the cord on a life jacket. Sun cream deposits can irritate their eyes. As a result of confinement, lack of proper social interaction, and various health issues, they can become depressed, giving up the will to live, or they become aggressive, are labeled a “bad dolphin” and dealt with accordingly.

The “research card” is not valid. Science is now able to study dolphins more effectively in their own habitat and only a tiny fraction of the money from ticket sales is funneled back into marine biology. Make no mistake, this is strictly a financial opportunity; these institutions have become multibillion dollar businesses. We need investment for tourism in Huatulco, but do we need this?

There is a movement to do away with the type of cruelty that is currently being proposed here in Huatulco. In February 2014, Virgin Holidays vowed to stop working with places that continue to capture whales and dolphins from the wild or import whales and dolphins taken from the wild. Several European and Caribbean countries as well as India have banned having dolphins in captivity. Many of us have chosen to live in our community because of its beautiful natural resources and covet our Earth Check certification for sustainability. With 5000 hectors of National Marine Park, Huatulco bills itself as an important “eco-destination”. Aside from the fact that is just wrong to imprison intelligent majestic creatures like dolphins, what would this do to our image as an eco-tourism destination? For those who are interested, there are ample of opportunities in Huatulco to see dolphins the way God meant them to be seen. Rent a local boat and spend a day on the sea.

You can help to ensure that there will only be free and independent dolphins living and thriving on their own terms along the Pacific Coast of Oaxaca. Below is link to a petition to the mayor of Huatulco to prevent this business venture. It can be signed and forwarded on line. Please take a moment to do it now.