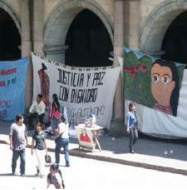 UPDATE June 21: I want to express my full support for the eloquent words of Lila Downs:

“Violence provokes more violence. Why provoke with confrontation and repression? If we have the same preoccupations: better education, respect toward students, respect toward teacher, respect toward life and society. Corruption needs to be eliminated in all areas including senators, union leaders, presidents and politicians that don’t accept an anti-corruption reform and accept to be bribed.”

“We are teaching our kids to resolve problems with violence and corruption. I know that we can change things using other ways. I have faith in the intelligence and heart of my pueblo.”

Oaxaca, one of the most wonderful places in the world, continues to bewilder.

The almost nonstop teacher protests in the city and throughout southern Mexico over the past ten years are inconceivable to those who do not understand the situation, complicated to those who do.

I’m no expert. I’m someone who loves Oaxaca trying to make sense of the situation. I’ve traveled there every year for the past ten, on and off before that. I love the people, the food, the culture, and the city.

First, some history from the website that accompanies Lynn Stephen’s book We Are the Face of Oaxaca:

“A massive uprising against the Mexican state of Oaxaca began with the emergence of the Popular Assembly of the Peoples of Oaxaca (APPO) in June 2006. A coalition of more than 300 organizations, APPO disrupted the functions of Oaxaca’s government for six months. It began to develop an inclusive and participatory political vision for the state. Testimonials were broadcast on radio and television stations appropriated by APPO, shared at public demonstrations, debated in homes and in the streets, and disseminated around the world via the Internet … The movement was met with violent repression. Participants were imprisoned, tortured, and even killed.”

From a review of Stephen’s book:

“Sounds like a familiar story—the people, poor and with minimal resources, asking for better treatment for themselves and their children brutally crushed by cruel, corrupt, unresponsive government. If only it were so easy.”

Subsequent to the 2006 demonstrations, the situation in Oaxaca progressed by fits and starts, led by the powerful teachers union. Optimism broke out in 2010 with the election of Governor Gabino Cué Monteagudo, the first non-PRI winning candidate in 80 years. Owing his election to the teachers (and also to well organized support from many Oaxacans living in the United States, particularly California), he agreed to begin implementing the teachers’ demands instead of the federal reforms.

Then, things changed. The PRI regained control of the federal government in 2012. Newly elected Mexican President Enrique Peña Nieto instituted an education reform as part of a set of 11 structural reforms implemented in his first 20 months of power. Cué Monteagudo shifted his position and announced that he would implement the federal reforms.

The teachers took to the streets again. Now, in 2016, they’ve ramped up their protests to a point where some are asking if Oaxaca is in for another major period of unrest like 2006. Two years ago, 43 students disappeared from a teacher training school at Ayotzinapa in the state of Guerrero. The case has yet to be solved. The disappearance of 43 students is horrible and the lack of an explanation inexcusable. The teacher protests escalated in response.

But, there is another side, a dark side, to this complex situation. Union leaders have been arrested on charges of corruption and money laundering and imprisoned by the federal government. For some, this is long past due. It is an open secret that the union leaders in Oaxaca are mafia thugs and that the local government has been incapable of dealing with the situation.

One observer wrote: “… the teachers union has closed down the zocalo (central park) of Oaxaca. Yesterday they blocked the main avenues and many of the businesses. This has been going on for thirty years in Oaxaca and the government has been either sitting on its hands or answering with force. Both sides of the equation are negatives–each is ignorant beyond belief. The unions in Oaxaca are Mafias, and the government is complicit with inaction, and has never tried negotiating. Chaos is big business in Oaxaca.”

An article in Forbes put it bleakly: “A number of citizens, fed up with the corruption of the political parties are left with the option of voting for the ‘least bad,’ abstaining or annulling (tearing up) the vote. In any case, the climate is by no means festive. It more resembles a funeral.”

How do the students come out in this battle? How do the ordinary citizens of Oaxaca fare? Not well. There are frustrations with school days cancelled for teacher marches and strikes. Students miss school, parents must scramble for childcare, workers and businesses suffer and are forced to desperate measures to survive. Many fail. Even some on the left are saying enough is enough.

Most of the residents of Oaxaca, peasants, working class and middle class, abhor what the teachers do and get away with. Peasants don’t have the wherewithal to do anything about it; the middle classes are afraid that if they speak up against the government for the latter not enforcing the law, they will lose what they have as a result of having to bear the wrath of high ranking government officials. I have personally seen businesses shut down because the owner dared to speak out against the government.

The crisis has divided the teachers’ unions. The National Education Workers’ Union (Sindicato Nacional de Trabajadores de la Educación, SNTE) is the largest union with over a million members. It is aligned with Peña Nieto. The National Coordinating Body for Education Workers (Coordinadora Nacional de Trabajdores de la Educación, CNTE) represents some 200,000 teachers, mostly in poor rural areas including nearly all of the teachers in Oaxaca. The violent opposition by the CNTE has disrupted the community for a decade. Some local communities, fed up with the situation, have run the local union out of town and hired their own teachers.

There seems to be little doubt that Mexico’s education system is in need of repair. Mexico scores near the bottom in education among the members of the OECD. Recent tests carried out by the Education Ministry indicate that half of high school graduates in Mexico could only manage basic mathematics. More than half had reading comprehension problems. The Mexican government insists that national education standards must be put in place, that many teachers are lazy, ignorant, or even criminal, and that the CNTE is corrupt and holding back progress.

Teachers say the results are skewed by measurement difficulties in rural or indigenous areas and that the reforms are not about quality education but are really a means to fire education workers, shrink the labor force, and close schools in rural indigenous areas. Teachers complain the education “reform” seeks to make them scapegoats for the failings of Mexico’s chronically underfunded schools. The protesting teachers have been supported by naïve leftist organizations throughout the world, including in Britain and the United States, whose hearts may be in the right place but whose heads are muddled.

Students, whose only hope of an improved life depends on a good education, are caught in the crossfire. The teachers do have a point. The reforms talk about having a computer in every classroom when many schools don’t even have a regular classroom or other basic necessary resources. OECD Chief of Staff Gabriela Ramos recently noted that Mexico spends less per student than any other OECD country. It will take more than passing reforms to reform education in Mexico. : It will take a real attempt to break the unions’ Mafia-like control of the system, sufficient resources, and a realistic understanding of local conditions.

There are some excellent teachers in Mexico, fully devoted to their students, many of whom live in poverty compounded by drug violence. Others, however, view teaching as no more than a means of generating a steady income and benefits not available to the rest of the population, who work in the informal, self-employment economy (60% of Oaxacans). Several teachers have bought their teaching certificates or inherited them and are woefully unqualified.

Education workers, who make about average salaries for the area, have long enjoyed job security and stable, if modest, paychecks. Peasants and informal peasant workers have faced increasingly precarious conditions. Teachers also have pensions of around 80% or more of their salary with benefits. But, it is the union leaders themselves who have profited the most. There is little or no accounting for the enormous amounts of money that pass through the union coffers. Teachers have little if anything to say about union policies or tactics. Instead, they are intimidated and coerced into supporting the corrupt union bosses.

After ten years of teacher protests, there seems to be little common ground. A complete overhaul of the union seems like the minimum action necessary to make a positive change in education. The existing union is and will continue to fight the reforms tooth and nail.

Periodic teacher evaluations and a merit-jobs system are already in place. The first teacher performance tests were held this past November. The Education Ministry laid off around 3,400 teachers who refused to take the exams. Teachers can be fired if they fail to pass the exam after a third try. Last year, federal and state governments, seeking to implement the education overhaul, fired and replaced some 300 CNTE members from management positions at Oaxaca’s education agency. Teachers’ payrolls were also transferred to the federal government, which now pays the teachers directly. On May 19, Education Secretary Aurelio Nuño Mayer announced that he was firing 3,000 teachers from Oaxaca, Guerrero, and Michoacán for not having worked for three days.

The union leaders have responded with the usual rhetoric: “This disastrous government forgets that our spirited Local 22 has been able to maintain its strength because it is a grassroots movement. There will never be enough jails to imprison all the teachers of the country. The government may be able to take away the freedoms of many, but never the ideals of their struggle, their convictions and their determination to resist the assault of a terrorist government.”

Negotiations between the two sides have been unproductive or nonexistent. The government says teachers must return to classes before talks can continue. Teachers demand the government freeze the implementation of its “unpopular” education reform.

As unpleasant as the current situation may be, I would like to think this is the beginning of a final solution. I want to hope somehow the two sides can find a way to come together for everyone’s benefit, especially the students and the citizens of Oaxaca. Unfortunately, this is probably just wishful thinking on my part.

Something must be done or Oaxaca will continue to languish. Someone must step forward. Where are the leaders? For those who refuse to lead for the greater good, I say: Off with Your Heads !

So, what can I do? What can you do if you care? No matter the outcome, I’m going to Oaxaca once again this year. Nothing can keep me away from a place I love so much. I’ll spend my money in local businesses, spend time with the local people I know and love, and speak out, because I have that luxury, for a better and more just society. Who knows? Maybe it will have a positive effect?

For more writing by David Herstle Jones check out his blog

Think in the Morning.