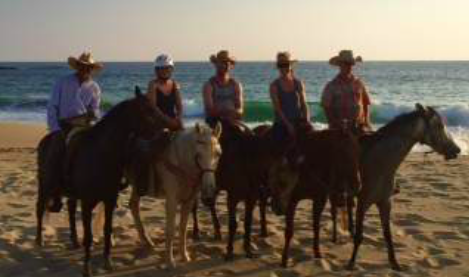 My wife asked me to get her a new ride. I suggested something sporty. Maybe a convertible with air, leather seats, four wheel drive, single tuned exhaust. She said perfect…so I bought her a horse. What actually happened is we purchased a home in Salchi Bay 11 years ago and decided one day that it would be great to go for a horseback ride and explore all the beautiful local beaches. We were introduced to Francisco (Chico) Ramirez who had three horses and a hundred watt smile. After many great riding trips we asked if we could contribute to the ranch with some of our Salchi friends. The rest is history, with 27 head of cattle, 17 horses, 10 goats, 4 dogs and a rooster named Foghorn. Most of our goats get danger pay, as every time there is a birthday party or fiesta, one of their buddies goes missing.

The ranch is an absolute paradise for horse lovers as you can ride for miles through the jungle, up the river, to the beach and gallop along the ocean. It is a common sight to see 2 to 12 riders along the trails, on the beach, or parked at the Coyula bridge having a beer. The common comment from our many friends and visitors is “Do you know how lucky you are?”, and yes, we do.

Being rancheros has enabled us to enjoy the local culture to an extent we never thought possible. We are invited to all the local fiestas, bull riding, horse races and Gabalgadas (horse parades) and had 8 horses in the parade in Huatulco last year. The ranch is a fun, busy place and visitors are always welcome.

Chico is well known in the local communities and hosts the kindergarten children at the ranch twice yearly. Despite living in small towns it is normally their first encounter with either cattle or horses. We attempt to give them all a horseback ride and after a few horse pets they are more than a little excited to become vaqueros. Chico also hosts the children with disabilities from the school in Santa Maria Huatulco. This is a bit more of a challenge however a smile from one of those kids when they get off their horse is worth a million pesos. The therapeutic value of the animals is quite amazing.

We decided to improve our horse herd and have travelled all over Mexico, buying horses in Puerto Vallarta, Guadalajara, San Luis Potosi, Parque National Pinotepa and Rio Grande. I should add: the only people who don’t get lost in Mexico are those people who don’t drive in Mexico.   After our second trip my buddies and I thought we were getting to be pretty astute horse traders so we asked Chico if we could help. He said “Yes, don’t speak.” These have been fabulous adventures, experiencing unbelievable hospitality from total strangers who tolerate our bad Spanish. My wife asked me “How much fun is that?” I needed to tell her something she could relate to, so I replied “Like shoe shopping with someone else’s credit card.” She came on the next trip.

Mexico generally gets a bad rap as a dangerous place to travel; however our experiences have been completely the opposite. We have been “test driving” horses on the back streets of Puerto Vallarta at midnight and driven roads Pancho Villa had never seen. We have received nothing more than the greatest help and hospitality. There are indeed dangerous places in Mexico but the ranching community certainly is not one of them, unless of course, you ask them to pronounce Saskatchewan.

We were fortunate to host Ryan Smith, a very well-known horse trainer and instructor from Alberta, for a week in November. He posted a video of a ride on the beach in Coyula and had 2600 hits the first day. His single most frequent comment was “I’m coming back. This place is amazing.”

One of our rancheros (Patty Sealy) is a film producer and director. She produced and directed a sci-fi trailer at Rancho El Regalo and in the Salchi area last year. She asked me to participate and I envisioned a “Brad Pitt” type role with perhaps a love scene thrown in. She gave me a shovel and said, “You’re a wrangler and don’t speak.” She has just received funding and it will soon be a major motion picture to be filmed near Mexico City.

Now that my acting career has stalled I am once again enjoying this fabulous place we call Huatulco…..on horseback of course.