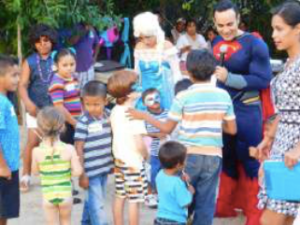 On Friday, January 6th owners of Cosmo Residences hosted a Día de los Reyes party for the Cosmo staff and their families.   This celebrates the traditional Mexican day when children receive gifts from the Three Wise Men (or Magi). The festivities were held on the beach at Cosmo and attended by Cosmo owners, the staff and 25 of their children ranging in age from babies to 12 years old. Actors portraying Superman and Elsa from Frozen presided over the event. Tacos, pizza and the traditional rosca de reyes (kings’ cake) were served; a local disc jockey played popular tunes while the piñatas were smashed. The highlight of the afternoon, of course, was the gifts for all the children. The event was held to celebrate the children and give the owners the opportunity to express their appreciation for their excellent staff. Those who attended concluded it was great fun and it will become annual event.

Unlike Canada and the United States, where gifts are brought overnight by Santa Claus, Christmas Eve and Christmas Day in Mexico celebrate the birth of Jesus Christ. Día de los Reyes marks the end of the 12 days of Christmas and celebrates the Three Wise Men who traveled from afar bearing gifts for the baby Jesus. And the children of Mexico look forward to this day when Los Reyes leave gifts overnight near the shoes of children.

The day is also known as the Epiphany and dates to the 4th century. A feast was held on this day to celebrate Jesus’ baptism and honor the Three Wise Men. Many believe the Star of Bethlehem appeared in the sky upon Jesus’ birth. The Three Wise Men, Gaspar, Melchior and Balthasar, followed this star, which led them to the Christ child. They bore gifts of gold, frankincense, and myrrh for the newborn king.

Another tradition of the Three Kings’ Day holiday is the evening meal. Traditionally, on this day a special meal of corn tamales and hot chocolate is served. It makes for a perfect Mexican meal, one that is enjoyed by the entire family.