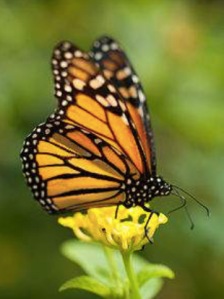 Chaos Theory states that something as small as the flutter of a butterfly’s wings can cause a hurricane on the other side of the world. Could that really be possible? Can something so seemingly insignificant, the flap of a butterfly’s wing, actually create devastation and destruction on a massive scale? Perhaps a better question would be what effect would the absence of butterfly wings have on our environment?

In medicine, doctors use the beat of a heart as an indicator of a body’s overall well-being. When it comes to the environment, there is no “pulse” to tell the state an ecosystem. Scientists use what are known as “indicator species” to determine how healthy different ecosystems are, and the health of our planet in general.

One important indicator species that is rapidly in decline is the eastern monarch butterfly. Different subspecies of monarch butterflies can be found in different regions of the world, but for most of us, the most well-known are found in North America and follow a migration pattern primarily from the northern east coast of the United States down to Mexico. Like many humans, they migrate to live in perpetual summer-like temperatures. This allows each generation to complete its lifecycle in the most favorable environmental conditions.

It takes five generations of butterflies to complete the 3,000-mile migration each year. Environmental conditions have to be just right along the entire migration corridor in order to support the succeeding generation so it can continue the journey.

When experts talk about the state of the eastern monarch butterfly, they use words like “disappearing,” “precipitous decline,” “plummeting populations,” and “doomed”.

According to a study published in the journal Scientific Reports, “The eastern monarch butterfly population in North America plunged by 84 percent between the winter of 1996-97 and the winter of 2014-15.”

NationalGeographic.com notes that “between and 2013, there was a 43.7 percent decrease in the area occupied by the butterflies in their winter sanctuaries.” Therein lies the problem, the decline of the necessary food and “shelter” these insects need in order to reproduce and thrive.

In the winter months, the butterflies settle in a very small area (only about 15 acres) in the high mountainous region of Mexico, an area that is getting increasingly smaller due to deforestation and severe weather conditions in recent years.

But the bigger problem lies in the north. Normally, in the summer months, monarchs would stretch out over vast areas where the plant milkweed is abundant. The eastern monarch butterflies rely on a very specific species of milkweed in order to lay their eggs. This is the only plant that monarch butterflies will lay their eggs on and it is the only source of food for the monarch caterpillar. Thus, they are wholly dependent on an abundance of milkweed in the north to support the continuation of the species.

The problem is, modern agricultural practices are killing the milkweed. The conversion of grasslands and open space to large scale mono-cropping operations that use of pesticides and herbicides is having a devastating effect on milkweed. Milkweed is considered, well, a weed. It has no known benefit to humans, so it is wiped out and replaced with crops.

The irony is butterflies are pollinators and are needed to pollinate some of the very crops that are planted in the areas where milkweed once grew.

But declining milkweed populations aren’t the only factor contributing to the demise of the monarch butterfly. Climate change also plays a role. This last March, a freak and severe winter storm in the mountains of central Mexico killed an estimated 6.2 million butterflies and destroyed some of their precious southern habitat.

Climate change has also shifted the growing seasons of some of the plants that the monarchs rely on in their migration corridor, which may be contributing to the decline as well.

Different studies report varying numbers of decline in the eastern monarch butterfly, but the fact is, they are in decline. This indicates there is something radically out of balance in the ecosystems the monarch migrates through, and it could soon be affecting the human population as well.

So what can be done? If you want to do your part to help bring back the monarch butterfly, you can plant milkweed in your home garden and create a safe haven for monarch butterflies to lay their eggs and grow to develop the small, quiet wings that might just create a little chaos in our cosmos.