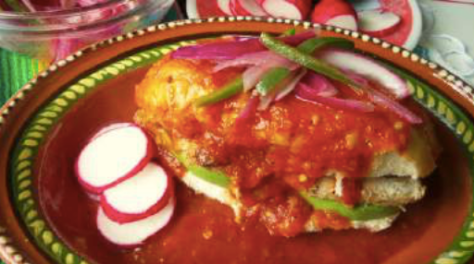 The sun is going down. There’s nothing in the fridge. “I feel like Mexican,” say millions of Americans and Canadians, and their desire is readily satisfied by any number of chain restaurants offering what customers perceive to be south-of-the-border cuisine.   However, when folks actually arrive in Mexico, and “Mexican” is all there is to be had, they’re often confused about what they find on their plates.

That confusion is due to, on the one hand, many north-of-the-border Mexican restaurants serving one or another version of “Tex-Mex”—i.e., NOT Mexican—food, and on the other, Mexican food changing sharply from one region to another. Enchiladas potosinas (from San Luis Potosí—red chile tortillas folded like empanadas and stuffed with tomatoes, queso cotija, jalapeños, and onion) are nothing like the Yucatecan version, papadzules, filled with hardboiled eggs and sitting in a pumpkinseed sauce, topped with roasted tomato sauce.

The Food of Northern Mexico

Climate and topography in ever-so-sandy Baja make it Mexico’s wine-producing region, but the area also serves food that would be familiar in California—tempura-battered fish tacos, seafood cocktails. The margarita and Caesar salad come from Baja, and Spanish paella is appears on many menus.

Sonora gave us burritos, so beloved north of the border.

Durango’s barbacoa is usually prepared in the traditional way, by steaming meats wrapped in banana or cactus over a heat source at the bottom of a deep pit (see “Barbacoa: The REAL Mexico,” by Kathy Taylor [April 2012, www. theeyehuatulco.com/2012/04/01/barbacoa-the-real-mexico/).

Ranchers turn their abundance of milk into a wide assortment of cheeses, including Chihuahua’s queso menonita, which melts better than most other Mexican cheeses, and queso fresco, a feta-like cheese.

This area also boasts ideal growing conditions for fruits, vegetables, and grains, not to mention livestock. If you visit the region’s leading center of cuisine (culture, too), Guadalajara, you’ll find birria, a regionally spiced meat-and-chile stew (usually made of mutton or goat, but could be prepared with pork or beef). Just west of Guadalajara, Tonalá is the place to get wonderful pozole, the broth soup that contains hominy and chicken, turkey, or pork, plus a variety of garnishes. At Los Gallos in Huatulco, it arrives with bowls of shredded lettuce, various herbs, sliced radishes.

If you long for French dip, try torta ahogada (literally, a “drowning sandwich”). Take a bolillo, fill it with crispy fried pork, throw in onions, radishes, avocados, and chiles, and pour a tomato (mild) or chile de arbol sauce (much hotter) over it. Tortas ahogadas can be made with chicken, cheese, or beans as well.

Production of tequila—true tequila must come from places legally designated to use the name—centers around Jalisco.

For those who drive from the north to Oaxaca Juárez or Huatulco, it also includes the glorously desolate, cactus- and yucca-laden altiplano (also known as the Bajio) that lies between the eastern and western ranges of the Sierra Madre. The first Spanish colonists settled on the altiplano with their imports of rice, pork, and European spices. Indigenous cooking had been largely vegetarian and the key “grain” was corn—so this is where you will find the first use of rice, most likely in morisqueta, a sausage and rice dish served with a tomato-based sauce. Morisqueta often includes beans as well, and it can arrive on the table topped with cheese. Chilayo is a stew of pork ribs in a spicy guajillo sauce, topped with tomatillo salsa and served with morisqueta rice (usually minus the sausages). The altiplano also serves churipo, a stew of beef, cabbage, onion, chiles, and xoconostle (a sour cactus fruit).

Carnitas, or deep-fried pieces of pork, probably originated in Michoacán, which is also home to the city of Cotija, which produces cotija cheese, perhaps the best known of the quesos frescos.

And here, too, is where milk-based desserts got started. Cajeta, or caramel made from goat’s milk, is the flavor of dulce de leche (as in the divine Häagen Dasz ice cream). Chongos zamoranos (cinnamon-flavored milk curds) is so popular it comes in cans, but apparently home-made is way better!

The Mexico City area sports a lot of haute cuisine offering upscale versions of regional specialties, but you can still find plenty of excellent regional cooking in the area. Although there is an ongoing dispute between the states of Puebla and Oaxaca (occasionally Tlaxcala chimes in) about just where mole originated, there are plenty of these quintessentially Mexican sauces to go around, and they can be very different. They go by color (red, black, green, yellow, white, pink), by where they come from—e.g., mole poblano from Puebla (the one that always includes chocolate), sometimes by the ingredient they’re made to cover, etc., etc. And then there’s always guaca – mole!

The other famous dish from Puebla is chiles en nogada, a striking red-white-and-green combination of chiles stuffed with picadillo (spicy ground meat), covered with a walnut sauce and snowy white crema adorned with pomegranate seeds. Puebla also serves up cemitas, sandwiches filled with beef milanesa (available in the supermarket), panela cheese, onions, salsa roja, and avocado, and seasoned with pápalo, an herb described as being halfway between cilantro and arugula.

Mexico on the Gulf

The Gulf states offer a cuisine influenced by not just indigenous Mexico and Europe, but by the Creole mix of Afro-Cuban influences from the cities that circle the Gulf of Mexico—New Orleans, San Juan, Havana, Cartagena, and maybe a bit of Caracas. Vanilla is native to this area, as is hoja santa, or Mexican pepperleaf, which is also called “root beer plant” for its sarsaparilla/root beer flavor.

This is a great fruit-growing area, with pineapple plantations lining the coast of Vera Cruz, citrus fruits, papayas, mameys, and zapotes. Bananas and plantains (both of African origin), yucca, and sweet potatoes grow easily here.

Tabasco sauce does indeed come from Tabasco, and is used with the many kinds of seafood caught and served in the state; huachinango a la Veracruzana (red snapper Veracruz-style) is the region’s signature seafood dish—the fish is bathed in light tomato sauce seasoned with onions, capers, olives, sweet peppers, and citrus juice. Although most recipes use lime juice to season the fish, the best huachinango I ever ate added Seville orange juice (naranja agria, “sour orange”) to the toppings.

Like the Gulf coast states, the food here is influenced by Caribbean tastes, with some strains of Asian and Middle Eastern cuisines. Achiote (annatto seed) colors a lot of Yucatecan food, and gives it a gentle nutmeg-pepper flavor. It also forms the basis of recados, mixtures of seasonings formed into pastes; recados in turn season one of the regions most famous dishes, cochinita pibil—piglet cooked in pit.

Yucatecan cooking also makes great use of tropical fruits: small Mexican plums, tamarind, mamey, and those bitter oranges; sopa de lima (chicken-lime soup) gets its heat from habaneros, a gentle spicing from cinnamon and cloves, and some crunch from fried tortilla chips.

Oaxaca lays claim to seven varieties of mole: negro (black), rojo (red), coloradita (sort of red, really brown), verde (green), amarillo (yellow), followed by chichilo (a smoky flavor) and manchamantel (“stain the tablecloth,” features a red chorizo and all its grease, cut by the fresh sweetness of plantains and pineapple). Oaxaca also features crisply fried chapulines (grasshoppers), both as a snack and in various dishes. Be sure to bring some dental floss for use in the restroom afterwards! Oaxaca also created tlayudas, those big flat charred tortillas topped with whatever you like.

Chiapas could be described as serving food as straightforward as its politics, which are based on preserving indigenous rights and heritage. Its cuisine makes good use of black beans, and produces very hot chiles, although the latter are more often put on the table as a condiment rather than an essential ingredient in a dish. Chiapas producs beef, pork, and chicken in the highlands, and everyone eats vegetables, even in meat and cheese dishes. Restaurants in San Cristobal de las Casas, the cultural center of the state, serve Spanish-influenced dishes using cured meats (hams and sausages), and a wide variety of tamales from its indigenous heritage.

This review of Mexico’s infinitely varied cuisine is woefully inadequate, omitting many classic dishes. And while you’ll get a chance to try specialties from many regions, not just Oaxaca, in your time here, there is nothing like the taste of a dish created by the people who have made it for generations upon generations. Get out, go places in Mexico you never thought you would, ask questions, EAT!!!