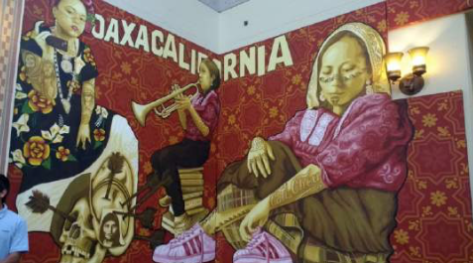 The first major period of Mexican art and promotion of mural painting began in Mexico in the 1920s the most famous being the ‘big three’, Diego Rivera, José Clemente Orozco and David Alfaro Siqueiros. The art movement was centered around social and political messages as part of efforts to reunify the country under the post Mexican Revolution government. We had the good fortune- actually planned well in advance- to see an excellent exhibit at the Palacio de las Bellas Artes in Mexico City last winter, two floors, featuring the artists named above. And of the three Rivera is still my favorite. There is no lack of information about these artists, but the following story is a bit unusual.

Concurrent with the muralist movement in Mexico, in the late 1920s the Central Library of the City of Los Angeles commissioned the illustrator Dean Cornwell to paint murals depicting the history of California. (Remember that California, including all or parts of present-day Arizona, Colorado, Nevada, New Mexico, Utah, and Wyoming were part of Mexico until 1848, until the Mexican Cession and the Treaty of Guadalupe Hidalgo. The city of Monterey, California, was the Capital of the State of Northern California. The Mexican Cession (529,000 sq. miles) was the third largest acquisition of territory in US history). In the murals, as depicted by Cornwell, the people of European descent appear as bastions of progress and civilization, while the natives appear as servile, inferior, or as savage beings. Cornwell’s murals deny the contributions of the Native Americans, as well as their suffering during colonization/conquest.

For years, Maureen Moore, associate director of the Library, looked at the Cornwell murals with skepticism, and decided to find an artist to paint a more accurate version of history. Moore consulted Xóchitl Flores-Marcial, an expert historian in indigenous communities in Oaxaca, and Amanda de la Garza, associate curator of the Museum of Contemporary Art (MUAC) in Mexico City. At the suggestion of Flores-Marcial, they agreed to commission the Tlacolulokos, an artistic self-taught group formed by Darío Canul and Cosijoesa Cernas, both from Tlacolula, a city located in the Central Valley of Oaxaca. Garza had already worked with the Tlacolulokos in an exhibition for MUAC in 2014. Within the framework of the ‘Visualizing the Language: Oaxaca in LA’, commissioned by the Los Angeles Library Foundation and the Public Library, the artists completed a series of large format paintings that would reflect, from a contemporary perspective, what it means to be indigenous and an immigrant.

After several months of study and work, the group presented their work to an international audience on September 16, which they baptized with a name in Zapotec. “For the pride of your people, the way of the old and the memory of the forgotten” is the theme for the commissioned murals. Unlike the Cornwell murals, the indigenous characters in the Tlacolulokos’ work projects self-confidence and the power of self-determination.

Since the 1940s, Los Angeles has been an important destination for Oaxacan immigrants, mostly of Zapotec origin. Oaxaca is also one of the regions with the highest immigration to the United States, in particular California, where it is estimated that there are about 250,000 people of Zapotec origin in Los Angeles alone (also a large population at Lake Tahoe).

That is why one of the murals carries the word “Oaxacalifornia”, a term that describes a binational culture marked by a continuous flow of people and ideas. The murals of the Tlacolulokos also show how migration has transformed life on both sides of the border. The work portrays the departure of couples when migrating, the difficulty of raising children when families are separated, and the battle to adapt in a new country and preserve family ties, all in the face of the discrimination that the Oaxacans have historically faced.

The Tlacolulokos did not limit their work to the Central Library, and continued their work mainly in Compton and Watts. Upon returning to Oaxaca, they will paint again in the streets, just as they started together in 2006.

In Mexico, Mexico City is now home to a very thriving, modern art scene of young, emerging street artists. These include a preschool in Colonia Roma Norte, displaying one of many street murals of Jorge Tellaeche. There are other highly visual street murals that can be seen throughout the Colonia Roma Norte neighborhood. There is the work of MEAN, a 33-year-old street artist and muralist who has not only painted expressions of anti-consumerism in the life of the city, but has also traveled to Japan and Brazil to create artwork there.