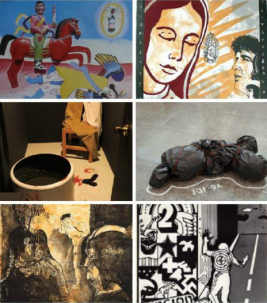 Maybe not so much. We probably all know more than we think we do about the highest points of Mexican art—Pre-Columbian Art, in which art and architecture, craft and communication were one; and post-Revolutionary art, best known for the major muralists (frequently called the “modernists”) who became international art superstars; their work was known as La Escuela Mexicana de la Pintura (Mexican School of Painting). Encouraged by their own government to help form the Mexican identity following the chaos of the Revolution, the muralists studied in Europe, painted in the U.S., and became national heroes. They tended to overshadow more personal painters who are now cherished—Frida Kahlo (1907-54) who was considered a surrealist at the time, and Rufino Tamayo (1899-1991), who rendered Mexican imagery with European techniques, and who was also at times considered a surrealist. (Neither thought of her- or himself as a surrealist at all.)

So, what happened next for Mexican art? If you look at international art markets or exhibitions, apparently not much. Although the muralists had all passed away by the 1970s, their work was and is instantly recognizable, commands high prices, and remains much in demand by museums around the world. The “Mexican” aspects of Frida Kahlo’s work didn’t achieve wide recognition until the 1970s (as part of the Neomexicanismo movement noted below), when she, too, joined the pantheon of high-end salability. There have been major international exhibitions focused on Kahlo, Rivera, and Mexican revolutionary art within the last five years, most notably “Paint the Revolution: Mexican Modernism 1910-1950, organized by the Palacio de Bellas Artes and shown in Philadelphia in 2016.

Moving on from the National Narrative

What the Mexican School bequeathed to its artistic heirs was a complete break with the European artistic (and religious) traditions imposed by the conquest, which, strongly encouraged by pre-Revolutionary dictator Porfirio Díaz, hung on after Independence (1821). While the rest of the world has still been looking at murals, Mexican artists have been creating bodies of work that redefine both the Mexican experience and Mexican art.

The rest of the world may be trying to catch up. Last year, just in the Boston, Massachusetts, area, Tufts University offered a course titled “Visualizing a Nation: Twentieth Century Art from Mexico,” and the Boston Museum of Fine Arts hosted a lecture by Robin Greeley, an Associate Professor of Art at the University of Connecticut: “Beyond the Mexican School: Mexican Art from 1950 to the Present.” Both provided an outline of Mexico’s post-muralist art that identifies four major trends. In the 1950s and 60s, the “Rupturists” broke with the national identity orientation of the muralists. By 1968, a pretty revolutionary year in itself, the Movimiento de Grupos (Collective Movement) emerged and established Mexican conceptualism by using art as a means to engage with political repression. The 1980s saw “Neomexicanismo,” a movement that returned the focus to Mexican identity, but took culture rather than history as its foundation. As the 1990s progressed, a new generation of Mexican artists started achieving international fame with distinctive styles and subjects.

La Ruptura. The Rupturists, called La Generación de la Ruptura (Breakaway Generation) found, not surprisingly, that muralist art was too predictable, too nationalistic, and too beholden to the dictates of the government. Before “La Ruptura” took hold as a name, these mid-century artists called themselves La Joven Escuela de Pintura Mexicana (The Young School of Mexican Painting). They didn’t have all that much in common except their rejection of the muralists, their interest in personal expression, and, for most, their exploration of international art movements, e.g., abstract expressionism and cubism. Like the muralists, the rupturists went to Europe to study, but the result was a drive to internationalize/universalize Mexican art—it could be thought of as “art for art’s sake,” rather than “art for the Mexican social-realist good.”

It took a while before the rupturists gained acceptance, in large part because the PRI (Partido Revolucionario Institucional) used the government’s control of Mexican museums to prevent showings of their work. By the end of the 50s, however, Mexican museums were eager to show the rupturists, emphasizing how they exemplified international art movements.

José Luis Cuevas (c. 1934-2017) may be the best-known artist of the Ruptura, partly because he was one of the, if not the, first to theorize the critique of the Mexican School and the muralists. While the school includes artists born abroad who came to Mexico during after WWII, the Mexican-born breakaway artists include Francisco Corzas, the surrealist Remedio Varos, Pedro Coronel, Lilia Carrillo, and Gustavo Arias Murueta (whose work contined into the Los Grupos era), among many others. The decade of so of the rupture with the past saw a lively art scene, as full of ideas about art as the art itself.

Los Grupos. Building on the rupturists’ efforts to change the character of Mexican art, some artists undertook art “interventions” that redefined the very nature of art and the artist’s role in society. Conceptualism and collaboration provided the method and means for what was essentially protest art that aligned with international student and worker protests of the 1960s and 70s.

Conceptual art, in which the artist’s concept or idea was complete before he or she even decided how to render it, makes the artistic expression of that concept secondary to communicating the concept itself. What that means in practice is that artist collectives got out in the street and performed their art, they created political exhibits that said, “Get Lost!” to the power structures of the art establishment specifically, and repressive political systems in general. Art was where it happened, it was what you declared it to be.

The core event in creating a movement out of the two dozen or so collective groups across the country was the October 2, 1968, massacre in the Plaza de las Tres Culturas in Mexico City’s Tlatelolco neighborhood. A crowd of about 10,000 people had gathered for a meeting to plan actions to counter the government’s efforts to cut down on student and worker protests in advance of the Mexico City Olympics (which turned out to be the Black Power Olympics). When student leaders arrived, a helicopter dropped three flares and snipers started taking out the students. When it was all over, somewhere between 300 and 400 people lay dead. Tlatelolco was the start of an unofficial “Dirty War” conducted by the government against protest of any sort. Artist collectives were galvanized in their efforts to find effective modes of expression and a new social role for artists—this was the Movimiento de Grupos.

Art as political action, art as resistance, is difficult to characterize, and it’s hardly the stuff of Art Appreciation 101. There is no “art scene” in which you can identify trends, peruse individual paintings or sculptures, or discuss how style, composition, and content constitute a work. Perhaps it takes some perspective to get a grip on it—in 2016, the Museo Universitario de Arte Contemporáneo (MUAC) hosted a retrospective of works by one collective, the Grupo Proceso Pentágono. The highlight is a piece called “Pentágono,” which the collective had shown at the 1977 Paris Biennale. It is a star-shaped room that looks perfectly normal from afar. However, among the innocuous items on a desk are bullets, scalpels, body parts, the Black Power salute. The room contains a chair positioned beneath an electrical outlet with wires dangling towards a potential occupant. The shape of the room is meant to bring to mind the U.S. Pentagon, considered the grand political and military manipulator of Latin America, and the room itself is a torture chamber. Outside lies a trussed-up black plastic body bag (description based on photos in Jeff Peer’s review in the online magazine Hyperallergic, 02/12/16).

Grupo Proceso Pentágono has arisen now and again since the 1970s. When 45 indigenous Tzotzils were massacred in Acteal, Chiapas, by paramilitaries opposing Zapatistas, Pentágono erected a graveyard in the middle of the zócalo in Mexico City. To protest the disappearance of the 43 student teachers from Ayotzinapa, Pentágono produced a video installation that spoke to the “permanence of the conditions of violence, repression and silence” that continue in Mexico.

Neomexicanismo. The next important movement in Mexican art has been described as a “slightly surreal, somewhat kitsch” version of the social realism espoused by the muralists. The very term “Neomexicanismo” was originally intended as a put-down, but the off-kilter approach allowed these artists to question traditional notions of Mexican identity. Neomexicanismo artists expanded, and sometimes subverted, traditional material to explore hitherto taboo subjects, notably gender and sexuality.

Nahum B. Zenil’s 1985 painting, Señora y Peces (Woman and Fish) shows a woman lifting her skirt to produce a flood of fish, her fertility giving birth to abundance. While the subject matter is not so far from Rivera’s portraits of indigenous Mexican women, Zenil’s portrait upends traditional religious assumptions about the true source of nurture. (This is an unusual painting for Zenil, much of whose work explores the relationship of his being gay to traditional and religious Mexican values; he can be subtle, though—it takes a while to notice that his 1989 watercolor San Miguel Arcángel, shows the Archangel with a penis, testicles, and accompanying pubic hair impaled on his staff.)

The multi-dimensional work (wood and oil on canvas) El Valiente (The Brave One, 1983) by Germán Venegas is a prime example of Neomexicanismo’s use of national symbols. Here the indigenous warrior is being crushed beneath the horse’s hooves, the “brave one” seems to have cut off the warrior’s hand, and a dark-skinned saint, complete with Guadaloupe-style full-body halo, seems to be praying over the scene.

The post-modern scene. While Mexican artists may not be at the top of the sales lists of the big auction houses in New York, London, Paris, or Rome, Mexico is very much interested in contemporary art. Mexico City and Oaxaca have both established museums of contemporary art, both cities host numerous galleries, and there is a national biennale for contemporary art.

If it needed a name, this phase of modernity in Mexican art might be styled “the triumph of talent.” There is no school, no trend, to quickly identify what to expect from a tour of contemporary exhibits. A quick Google produces multiple “top ten” artist lists, and the lists certainly don’t overlap. The top ten includes painters, sculptors, architects, people working in all types of media—if there are commonalities among today’s Mexican artists, it is the ability to work across medium and form, and to re-envision the materials and objects of everyday life to achieve new insights.

And if there is a “most famous” contemporary artist, it’s probably Gabriel Orozco. Born in Veracruz, Orozco has had his work shown in New York, London, and Paris, as well as Mexico. His talents encompass drawing, photography, sculpture, and installations. His work reconfigures familiar materials and everyday, often discarded, objects to give the observer a new conception of the “reality” of the art object.

Another aspect of the current art scene is that the “art establishment” has reestablished itself, and money and connections eagerly support talent and the exhibition thereof. The Kurimanzutto Gallery in Mexico City, run by José Kuri and his wife Mónica Manzutto, represents top ten artists Gabriel Orozco, Minerva Cuevas, Dr. Lakra (a tatooist as well as artist whose dad is the well-known artist Francisco Toledo), Gabriel Kuri (José Kuri’s brother), and Damián Ortega, among others. On the other hand, there is little top-down support from the government for art education in schools or for the activities of working artists. Whether the two phomena are related, whether Mexican artists will still produce distinctively Mexican art, or whether contemporary Mexican art faces an ever more rarified, and thus unsustainable, future, are certainly relevant questions. There’s always “Elvis Meets the Virgin of Guadeloupe” by Enrique Chagoya (1953 – ) somewhere in the unexhibited depths of the Metropolitan Fifth Avenue in New York. Food for thought.