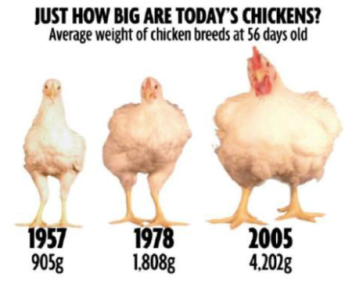 In an age when schoolkids think that cheese comes from plants, tomatoes grow underground, and pasta comes from animals, I think it’s safe to say that while what we put in our mouths might be as close as the end of our fork, many of us are far too removed from its origin.

I grew up with blood on my hands, literally. I went hunting and fishing and, on occasion, I helped a friend’s family butcher their chickens before winter. This was a process that involved a large tree stump, two 10 penny nails, and an ax. The nails were set right in the center of the stump separated at the exact width of a chicken’s neck. It was a bloody process, and butchering, plucking and prepping a few dozen chickens took all day. It was exhausting, to say the least. But, whenever I had chicken at the Kuhrys’ house, I knew just where it came from and how it got there.

Chances are, unless you’re stretching necks between two 10 penny nails, you don’t have a clue where your “pollo” is coming from; your “huevos” either. And if you don’t know where it’s coming from, you don’t know the impact it’s having on the environment, or on the animals themselves.

Industrially farmed chickens are raised in what are known as concentrated animal feeding operations (CAFOs). Factory chickens are chosen for rapid (and unnatural) growth and maturation, their ability to withstand confinement (allotted area for each animal is the size of a mouse pad), and their resistance to pathogens that are rampant in CAFOs.

Even with these carefully selected and craftily bred “busty” (in the case of fryers) and quick-to-mature chickens, industrial conditions take their toll, and extreme measures must be taken to mitigate the effects to ensure that animals will produce the desired result before they are slaughtered.

Massive amounts of antibiotics must be used to ensure that animals survive the conditions of a CAFO. It is also standard practice to cut off a portion of the beak, so these overly stressed chickens don’t peck one another to death. And their unnatural rate of growth and maturity often causes deformities, injuries and the inability to move (not that they have much room to do that anyway).

While it might be easy to dismiss the effects of CAFOs on the animals themselves, it is much harder to deny the environmental impact of raising poultry on an industrial level.

Larger CAFOs can house up to 125,000 birds in just one building! Factory farms create environmental pollutants to air, land, and water.

While the odor and noise may not be considered “air” pollutants, they are certainly a consideration for those living near large factories. The dust contains manure, of course, but it also contains dead skin, mites, traces of pesticides, and bacteria, as well as high levels of ammonia and methane (from the feces).

And what do they do with all that manure, which hundreds of thousands of forcibly fast-growing chickens produce on a daily basis? Some sell it as fertilizer, which might seem like the most environmentally friendly option, but if you consider the amount of antibiotics and other “necessary” things pumped into and fed the animals, it’s not exactly a healthy option. Others have storage protocols which hold a slurry of manure mixed with water that is held in large open ponds or containment units, which produce an awful smell. One way or another, all of the chicken excrement finds its way back into the watershed. There’s really no other choice.

One study even demonstrated the health risk to humans simply driving behind a truck transporting industrially raised chickens. Always roll your windows up was the conclusion!

And, if again, you’re inclined to dismiss these impacts, keep in mind, Mexico is no small player in the chicken and the egg game. In 2013, they ranked 6th in the world in egg production. Poultry production represents 62.6% of Mexico’s entire livestock market and egg production 29.0%. So, it’s safe to say that the demand for cheap chicken is having an impact on Mexico’s environment.

Lucky for us, there are alternatives to factory farmed fryers and mass-produced eggs. No doubt, you’ve heard the terms “free range” and “cage-free” in reference to poultry production. And while these are arguably better options when you’re staring down the egg aisle or picking amongst the poultry at the supermarket, an even better option is to find local producers who raise birds and eggs on their own farm.

Local farmers’ markets are a great place to meet producers who can provide you with farm-fresh eggs and free-range chickens (free of antibiotics in most cases) that have experienced much better treatment and growing conditions than factory farmed birds.

It might seem that local farmers could not possibly meet demand, and while that may be true at present, one Huatulco-area woman, Marinhé Rosas, is planning a semi-large scale organic poultry/egg operation to begin in 2018 and scaling up to 5000 chickens within the next few years. If more of us request these products from local producers, supply will increase to meet the demand.

Creating a demand for locally produced “pollo” and “huevos” will boost your community’s economy, reduce environmental impacts and give you a healthier, more responsible source of meat and eggs. You will not only know more about what’s on the end of your fork, but you’ll know exactly where your food came from and how it’s been raised, without having to get your hands bloody.

What the labels mean:

Cage-Free – Hens roam free in an indoor barn or building, which allows natural behaviors and unlimited access to food and water. Beak cutting is permitted.

Free-Range – Free-range hens live uncaged inside barns with continuous outdoor access. The term free-range does not imply that chickens are guaranteed access to grass. Beak cutting and forced molting through starvation is allowed.

Organic – Uncaged, with some outdoor access, the duration of which is not defined. They are fed an organic, vegetarian diet free of antibiotics, hormones, or pesticides. Beak cutting and forced molting through starvation are allowed.

Pasture-raised – Chickens are allowed to spend most of their day in the outdoors, scratching and pecking. Their diet usually consists mostly of grass seeds and bugs, and is supplemented with chicken feed.

All Natural – Poultry and egg products labeled “natural” are required to be minimally processed and have no artificial ingredients. This does not have anything to do with the conditions in which the animals are raised.