In the last issue of The Eye I wrote an essay supporting the proposition that a major reason we should recognize the importance of mezcal, the Mexican agave-based spirit, is that no two batches are the same. Here we examine another reason why mezcal is a big deal: mezcal production is one of the most sustainable industries in all Mexico.

For the benefit of those who do not read The Eye monthly, let’s first review what I previously wrote regarding the basics of Oaxacan mezcal production.

After growing for typically about eight years and sometimes much longer, the agave is harvested; then its hearts [piñas] are slow roasted in a rudimentary airtight chamber over firewood and rocks at the family distillery (palenque) so as to convert carbohydrates to sugars. This is followed by crushing them into a fibrous material either by hand or using a beast of burden pulling a heavy circular stone compound or pure limestone (tahona) around a shallow round brick and concrete enclosure. The fiber is then fermented with the addition of water in a large vat (tina) and subsequently distilled in either a 300-liter-or-so copper alembic or in a much smaller clay pot, generally twice. Finally the alcohol by volume (ABV) is adjusted to the preference of the distiller (palenquero) or his market.

While it takes a long time to grow, once small starter plants have been transplanted from a home environment or greenhouse into the field in rows about a meter apart, if the planting occurs during the rainy season no irrigation is required in the subsequent years. And as I noted earlier, other crops can be planted in between the rows, enabling farmers to use their fields while the agave is maturing. Depending on the species, agave can be reproduced in two or three ways, with a single plant capable of producing thousands of offspring through germinating seeds.

Mezcal made with wild agave is often coveted and fetches a high price. Yes, there is a concern that in a couple of decades none will be left. To address the potential problem, some brand owners have an annual program in which small agave are planted in the hills and left to mature. And some communities only permit their residents to harvest wild agave from communal land if the palenquero agrees to plant two small agave for every mature one harvested.

Although annual weeding may be preferred in fields under cultivation, it is certainly not necessary. While infestations are infrequent, if the problem is the larvae known as “the worm” (gusano), even it can be harvested for multiple uses: to make worm salt often used as a mezcal chaser, to put in a bottle of mezcal as a marketing tool or to change the spirit’s flavor, and to cook with, including use as a key salsa ingredient. Dried and salted gusanos are also eaten as a snack.

The mere existence of the pre-Hispanic goddess of agave (some believe of fertility as well), Mayahuel, is testament to the important of the succulent dating back millennia. For at least 2,000 years some species have been used to produce pulque, a fermented beverage said to have multiple medicinal properties. These varietals can also be used to make mezcal.

Agave is also used as an ornamental plant and to make borders between properties. In either case, prior to or upon maturity, the agave can be harvested to make mezcal.

Even the unused parts of the agave which continue to play a crucial role in the lives of many Mexicans. When piñas are harvested to be transformed into mezcal, the leaves are typically left in the field, and are harvested once they begin to dry, usually by residents of nearby villages to use as firewood, to fuel pottery kilns and to cook a broad array of foodstuffs. The tall flower stalk (quiote) that shoots up at maturity is also used for firewood, in addition to being employed as a building material, and even to make the didgeridoo musical instrument. The fibrous leaves are used to make rope, clothing, grain sacks, horse bridles, and more, even sewing thread.

Once the first distillation has been completed, remaining water and fiber are cleaned out of the still. While that water has uses such as irrigation (yes, this has been deemed to have a negative environmental impact) and producing distilled water for use in reducing mezcal to the desired ABV, it is the fiber (bagazo)which has innumerable uses. It is utilized to insulate the rocks from the piñas in the baking process; as compost; as mulch for growing agave, tomatoes and other crops; to make adobe bricks; to make paper; as the substratum for commercially growing mushrooms; to make small planters; as fire starter; and more. 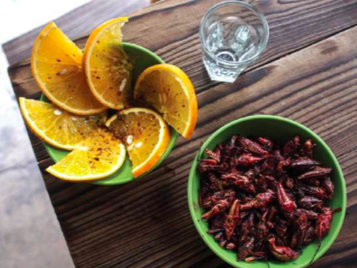 While the argument has been made that diesel is a much cleaner fuel than firewood for cooking agave and distilling, it is noteworthy that for baking agave, seconds in the forestry industry can be used as the fuel for the oven. The “waste” from debarking logs in lumber yards is often used to heat stills since typically there is some wood with the shavings from the logs.

After baking, the logs that were at the base of the oven have become not ash, but rather charred wood. It is typically broken into small pieces, put into grain sacks, and sold as charcoal for cooking. Palenqueros also use it as fertilizer, in particular for growing starter agave. They also use ash from their stills as fertilizer.

TOOLS OF THE TRADE:

Copper is expensive, and in fact buying a 300 liter still costs in the range of 70,000 pesos. But you can get 25+ years out of it, and when parts become corroded the still can often be repaired. If the still is clay, locally produced pots are typically employed. In both instances, the stills are encased, usually in a mix of mud, sand, adobe and clay bricks, with a bit of cement. With copper alembics a small length of rubber hose often serves as the spigot, and with clay pot distillation it’s usually a length of river reed (carrizo). In both cases a length of carrizo is also typically used as a venencia to test ABV, and as a thief to extract samples of the fermenting liquid from the bottom of the tina.

Oil drums and aluminum hard hats for condensing; tire rims and old wooden boards in still construction; irreparably damaged washing machines, sterilized oil drums, and a pit in the ground for fermenting; well cured 20 liter plastic cooking oil receptacles and discarded glass four liter cheap California wine bottles for storing and transporting. I have seen all of them and then some used in the mezcal industry.

More out of economic necessity and ingenuity than by design, those in the business of distilling mezcal have over generations created what we now should consider an extremely sustainable and environmentally friendly industry. Nothing goes to waste. When you ask yourself how you can buy such a high quality spirit for a mere pittance, it’s in part because of the industriousness of hardworking, talented and dedicated palenqueros and their families.