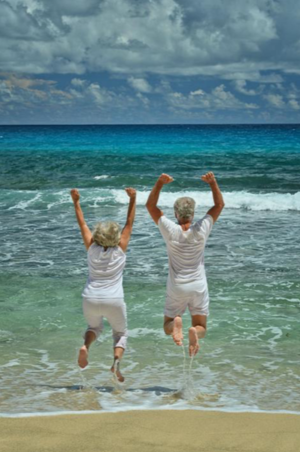 We certainly were not spring chickens when we first came to Huatulco. We marveled that people over age sixty-five traveled here from distant places. And we were sure that by the time we were seventy, we would need to find a warm place in the U.S. rather than in Mexico to provide the comforts and care that our aging bodies would need.

It’s not the first time in our lives that we were totally wrong. We’ve found that, as the years have passed, Huatulco has become even more ideal. Culturally, physically, and financially, we reap many benefits.

Culturally, the attitudes about and reactions to aging in Huatulco, and more generally in Mexico, are heartwarming, especially as compared to other countries. In a recent Pew survey conducted in 21 countries, when asked who should bear the greatest responsibility for the elderly, unlike many other countries where the most common answer was “the government,” Mexicans were much more likely to say, “their families.” In the US, Americans were most likely to say, “themselves.” And over the years we’ve developed quasi-familial relations with younger people in Mexico who look after us as if we’re their own.

English-language songs about growing older written after the mid-20th century tend be be at best satiric, such as the Beatles, “When I’m 64,” or they are downright mean. But one of the most popular folk songs in Mexico is “Mi Querido Viejo” (My Dear Old Person), a love song to an elder with the refrain: “Yo soy tu sangre, mi viejo, Soy tu silencio y tu tiempo,” which roughly translates to, “I am your blood, my Elder; I am your silence and your time.” In Huatulco, rather than being treated as a comical nuisance, our advancing age is regarded as a cause for gentle loving care.

Experientially, in the U.S., grey hair often seems synonymous with invisibility; many teens and adults who are standing and blocking sidewalks don’t notice older people trying to pass, or certainly don’t bother to move. Nor will they give up their seat in a public area or on transportation. In cities in Mexico, including Huatulco, younger people actively monitor the ability of grey-haired people to progress unhindered and encourage them to sit down to rest. Accidentally drop something in the U.S., and elders are lucky if it doesn’t get kicked aside by people rushing to and fro. In Huatulco, an elder is likely to experience younger people rushing over to help retrieve dropped items. And when an older person loses balance and falls in Mexico, everyone nearby rushes over to help them right themselves and check to see if they need immediate medical assistance.

The physical benefits of living in Huatulco are dramatically evident. We arrive from the cold north with stiff joints, aching bones and tense muscles. Within a few hours, the warm moist air and sea-level barometric pressure virtually washes away those common complaints of aging bodies, and we feel as if we’ve been rejuvenated.

The food available here is also conducive to a wholesome diet. Fish fresh from the ocean, organic fruits and vegetables, and wholegrain breads are not only prevalent but delicious. Although we see tourists reeling from margaritas and other alcoholic drinks, we stick to the excellent wines available from around the world. And in many Huatulco restaurants and condos, the water is entirely safe to drink without destroying the local ecology with plastic bottles.

Physical exercise is also a pleasure. While we no longer spend hours snorkeling, water exercises are just as beneficial in calm bays or ubiquitous swimming pools. Lovely gardens provide opportunities for walks. And gyms are accessible for equipment-aided strengthening.

Keeping mentally fit in Huatulco is also easy. There are many volunteer activities that keep organizational and intellectual skills sharp. Writing for The Eye is just one of these opportunities.

“But what can you do in a medical emergency?” north-of-the-border skeptics frequently ask us. We’ve had our share, and based on our experiences can assure them Huatulco is home to incredible specialists such as Dr. Miriam Lara de la Rosa, an ophthalmologist who, within a 30-minute exam, came up with the same diagnosis and treatment as U.S. retina specialists who employed hours of technologically-advanced testing.

Huatulco is also is less than one hour by air from Mexico City, where there are some of the best specialists and hospitals in the world. In our experience and that of friends who live in Huatulco, the emphasis here on holistic medicine and patient and family care results in not only availability of advanced medical procedures, but faster and more complete healing.

Financially, older people who have established official residency in Huatulco (or elsewhere in Mexico) can accrue many benefits. All it takes is an INAPAM (Instituto Nacional de las Personas Adultas Mayores) card, which can be obtained with the requisite documentation in Santa María Huatulco. The card entitles elders to deep discounts deep discounts for taxes, water bills, hospitals, and pharmacies. Small discounts are also provided at movie theaters and other entertainment venues. And many museums and archeological sites, including Parque Eco-Arqueológico Copalita (just past La Bocana) are free for card holders.