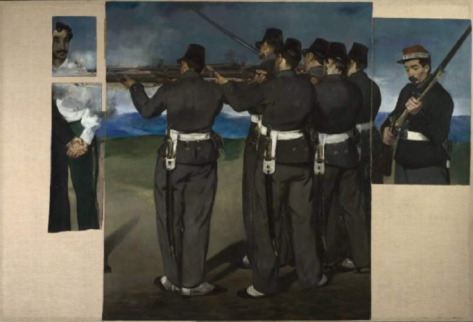 Sometimes the unseen is what makes art so powerful, what’s been covered up, cut out, or intentionally eliminated from the frame.

A few weeks ago, at the Victoria and Albert Museum in London, I noticed a significant, wall-sized painting, with several large pieces missing. It was obvious the main event had been intentionally cut out and discarded. The absence of … the void … the unknown drew me in. Why would an incomplete painting warrant such a prized placement in a world-renowned museum? Was it the subject matter or the painter that justified its esteemed location?

It turns out, it was both – the painting’s title was The Execution of Maximilian, and the artist was Édouard Manet. Oil on canvas, blood on soil, country vs country, men against men. The end result of a ruthless, under-handed power play for resource domination and a ferocious, resilient fight for freedom.

To understand the context of Manet’s work, here’s a quick (art) history lesson …

The painting’s origins actually begin with the election of President Benito Juárez in 1857, a man of the people and the first indigenous president ever to be elected to office in the Americas. Juárez, a reformist, was not a friend of the privileged minority in Mexico.

After “suffering” several years under Juárez, the Mexican elite developed a scheme to put him out of office with the help of political allies in Europe. They convinced the governments of Britain, Spain, and France to invade Mexico demanding repayment of debts, under threat of military force.

In January of 1862, troops from all three countries disembarked in Veracruz in a display of unified force meant to recoup debts owed. However, it soon became clear that Napoleon the Third, leader of France, had a more nefarious agenda. His was an all-out invasion to overthrow the government and rule Mexico in order to pillage its rich natural resources. Spain and Britain quickly recognized what was becoming a nasty imperialist attack and withdrew. Undeterred, Napoleon III’s troops remained in Mexico, eventually seizing control of several regions in central Mexico. In 1863, he established the Second Mexican Empire, an attempt to create a monarchical system in Mexico. This action was also backed by the governments of Belgium and Austria. In an effort to legitimize his new government, Napoleon III appointed Ferdinand Maximilian, a decorated Austrian Archduke, as head of the new Mexican monarchy.

Refusing to back down, President Benito Juárez remained as head of the Mexican government, in a country at war, divided under two flags – one conservative, foreign, and imperialist and the other liberal, national, and patriotic.

However, not so unlike many of our modern-day military invasions, Maximilian, only familiar with one type of governance, failed to understand the Mexican culture and its people. Proving to be too liberal for the conservatives and too conservative for the liberals, he soon lost the favor of both. With reports of disaster looming in the Second Mexican Empire, Napoleon III urged Maximilian to abdicate his “throne.”

And when word of his refusal came, Napoleon III withdrew his troops, leaving him to fend for himself and try to save his now precarious position as monarch of Mexico. Without the support of French troops, Maximilian was soon captured and sentenced to death. He was shot by firing squad on the 19th of June 1967, along with two of his generals.

Reports of the execution reached France on July 1st. Hearing the news, Édouard Manet, a well-known French painter, set to work almost immediately creating his first depiction of the event. Manet painted the execution three times over the course of two years, each time creating a different sense of reality. The first was based mostly on his imagination and, seeing obvious parallels, the Spanish painter Goya’s depiction of the Spanish resistance to Napoleon I’s armies in 1808. The firing squad soldiers wore sombreros and flared pants, conforming to the popular misconceptions of the Mexican military at the time.

His next incarnation of the event was much more detailed and politically charged. Reports say that he had probably seen photos of the execution that were secretly circulating in the French art underground. This depiction was much closer to reality, and Manet took the opportunity to make a political statement by painting the facial features of one of the sergeants so they strongly resembled those of Napoleon III. The features on the face of Maximilian, however, will never be known. This is the void, the absence, the unknown that drew me in at the Victoria and Albert Museum.

The fact that any of the painting remains at all is attributed to another famous painter, Edgar Degas. After Manet’s death, a member of his family cut the painting into fragments and discarded them. Degas was able to find four major portions of the painting and reassemble them. They are all that remain of the second Execution of Maximilian.

There is also a third Execution of Maximilian. This one is complete, yet somehow Manet still manages to keep the expression of Maximilian a ghostly secret. While Manet was able to improve upon the details of much of the events of the day, the face of the monarch remains, “pale and ghostly, seem(ing) to be fading into another realm.”

“This show … is a reminder of Modernism’s mutinous, myth-scouring origins. It achieves this by bringing one of art’s great guerrilla path-cutters, Édouard Manet, onto the scene, wry, infuriated, ambitious, and painting like Lucifer … For him, painting was thinking, and his thoughts shoot out in bold, impetuous strokes, ricocheting off multiple targets.”

There is no question that, in his final version, one of Manet’s targets was the French crown. And, as a result, the French government censored the viewing of all of these works until 1879.

Just as political statements brushed quietly, subversively on canvas are nothing new, censorship of political art isn’t either. The beauty in that is, often times, what you don’t see, what’s been covered up, cut out, or intentionally removed makes the biggest impact.