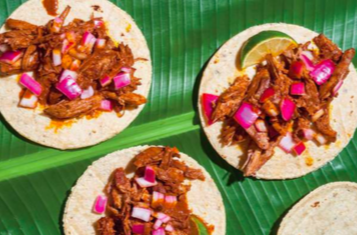 The flavor of any country or region undeniably revolves around its unique characteristics, one of the most essential being its cuisine.  Not only is Mexico’s cuisine distinct from those of its neighbors, but the essence of the cuisine varies from state to state within the country.

The peninsula of the Yucatán gives us succulent recipes burgeoning with brightly colored seasoning and methods that derive not only from indigenous Mayan culture, but also from European influences that arrived via Cuba.  The Mayans had an excellent diet of vegetables, birds, small animals, seeds, honey, and – most essential – corn and chocolate. New flavors introduced from Europe included olives, vinegar, capers, and European cheeses, this constellation of ingredients coming together in a new cuisine.  You can experience more about the flavors of the Yucatán cuisine by watching the Netflix original documentary called Salt Fat Acid Heat. The Acid episode focuses on cooking from the Yucatán.

Cochinita pibil truly comes from the people of the Yucatán. The Spanish word cochinita  means “little piggy” in English.  Pibil is a Mayan word that describes the technique of slow cooking underground.  As regular travelers to Mexico know, cochinita pibil is one of the most popular gastronomic wonders of the Republic.

Johnny Depp’s character Agent Sands in the 2003 film Once Upon a Time in Mexico is remembered as a fan of cochinita. “You really must try this because it’s puerco pibil. It’s a slow-roasted pork, nothing fancy. It just happens to be my favorite, and I order it with a tequila and lime in every dive I go to in this country. And honestly, that is the best it’s ever been anywhere.”

Even though cochinita pibil is obviously a pork dish, in recent times some cooks have substituted chicken with a nod to those who shun pork products. In fact, substitution has evolved overtime.  Before the Spanish arrived on Mexican shores, the indigenous people ate more deer, venison, and pheasant.  Over time, those animal populations diminished and today we eat pork and beef in place of deer, while chicken and turkey replace pheasant.

Agent Sands was right: the dish is nothing fancy, though there are variations on the central recipe in most Mexican cuisine cookbooks, including food guru Rick Bayless’ One Plate at a Time.  (Google “Rick Bayless” and “cochinita pibil” to watch a YouTube Video on making “The One and Only TRUE Cochinita Pibil,” filmed in the village of Yaxunah in the state of Yucatán.)  Diana Kennedy, also dedicated to Mexican cuisine, presents the dish in her own style in her many Mexican cookbooks.

Central to cochinita pibil is achiote, the red paste that gives the dish its brilliant scarlet appearance. Achiote, or annatto, is a natural pigment, extracted from the seed of a shrub called achiote, that is used in cooking and in cosmetics. The Mayans used it to color the body as well as in religious rituals. You can buy achiote in any supermarket or tienda in Mexico, where you’ll find it in a small box in the condiment department.

The other essential ingredient is sour Seville oranges.  Don’t worry if they’re not available in your region. Simply substitute juice oranges and add fresh lime juice to produce the sour liquid of the Seville orange. You’ll find Mexican cooking is always innovative.  The combination of the achiote and sour oranges is the basis of the marinade for the pork, which sits overnight in the refrigerator before it’s cooked.

A distinguishing adornment to the final creation is red onion that has been sliced and marinated in lime juice. Be sure to make plenty of onions because everyone loves this addition so much that they want more on the side. Chile habanero can also be sprinkled on top as a final step for those with steel stomachs.

Most recipes use banana leaves as a base and a covering for cooking the pork, but this is a step that you can skip if banana leaves are scarce in your neighborhood. There are a few other basic and widely available ingredients included in the simple recipe at the end of this column.  I recommend you look up your favorite cook’s version as you approach this dish. As always, there are hundreds of recipes online, including the one by Bayless.

Rick Bayless is a huge fan of over-the-fire cooking while the indigenous are loyal to in-the-ground cooking.  Most of us now settle for the in-the-oven method, which non-cooks like me find perfectly acceptable and much easier. Serve the pork as a meal in itself or in a torta or taco, all equally delicious.

You won’t be cooking while on vacation in Mexico?  ¡No te preocupes!  You will find cochinita pibil on the menu of Mexican restaurants in most states, from the simplest comida corrida to the lavish five-star bistros. In fact, you may even find cochinita in the form of tacos in the puestos on the street. (Don’t, however, mistake them for the tacos al pastor on the spit that are accompanied by pineapple chunks.)

Here’s a simple recipe, derived from several I found online. Remember to soak the pork in the sour orange/achiote liquid overnight in the fridge, and pickle the red onion in lime juice overnight too.

oranges and lime to create the sour orange flavor)

2 red onions, thinly sliced and marinated overnight in lime juice, for the topping

Chile habanero for a topping (optional)

The next day, place in a baking dish wrapped in banana leaves (covering well with foil if you don’t have banana leaves). Bake at about 150 – 170°C (300 – 340°F) for several hours or more until the meat is thoroughly cooked, tender, and easily pulled from the bone.

Serve with hot corn tortillas, the pickled red onion, a slice of sour orange, and chili habanero, or on a baguette or taco.  Black beans as an accompaniment are always welcome!