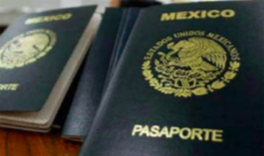 After living in Mexico for twenty years, I consider it home; last month I left the country briefly for the first time in twelve years. It was also the first time I used two passports to travel.  Leaving and entering Mexico, I had my Mexican passport stamped; entering and leaving Canada, I presented my Canadian one.

Mexican immigration policies have evolved over time. Twenty years ago, a temporary resident’s visa (FM, or Forma Migratorio, 3) had to be renewed annually for five years. Upgrading to permanent resident status (FM2) still required an annual renewal, but to maintain that status, you could not be outside Mexico for more than six months over the next five years.  Finally, after ten years in Mexico we attained immigrant status and no longer needed to renew our visas. This was a huge relief.

As landed immigrants, we had most of the rights attributed to Mexican nationals. We still needed a fideicomiso (a bank trust for our property), and we could not vote, but we were comfortable believing that we would never need to reapply and could stay here indefinitely.

A couple of years later, Mexico simplified its immigration policy. After just two years, someone who only spent part of the year in Mexico could apply for permanent residency. Our residency card looked exactly like someone’s who only lived here part time. It felt like a demotion. Some file somewhere may have indicated differently, but it still felt like a downgrading.

I had no concerns about getting booted out of Mexico, but the policy change made me begin to think about what could happen down the road.  I became a bit uneasy. We love our new home and since we never plan to leave Mexico, it made sense to take the next step … full Mexican citizenship.

This required proof that we had not left the country for two consecutive years and the ability to converse in Spanish with the officials at an office of the Secretaría de Relaciones Exteriores (Secretariat of External Affairs). I studied for the test, which covers Mexican history, culture, politics, and geography, but was exempted due to my age. Since Canada never signed the Apostille Hague Convention (an apostille is an official certification of a document’s validity), we had to send all our Canadian documents to Canada to be authenticated, and this took some time.

The biggest hurdle I faced related to my name. When I got married, I chose to do the traditional thing for once in my life; I took my husband’s surname. Since my documents did not match my birth certificate it became complicated, and without the help of local attorney Perla Vazquez, I might not have been able to complete the process.  It took me almost a year longer than it did for my husband, but in November of 2014, I got my Mexican citizenship.

There may not be many obvious benefits to being a Mexican and some of my Mexican friends shake their heads as they ask me, “Why?” Although I can vote, I am not sure I’m qualified to make an informed choice. If we wanted to, we could collapse our fideicomiso, and if we sell our property, there could be some tax benefits. But the main reason for wanting citizenship was that I want to feel that I belong here. I am part of this country; my entire life is invested here.

I prefer the Mexican climate and would take a sweltering day in Mexico over a freezing one up north. We are no longer entitled to the “free” Canadian health care system, but if we were, and I could say, “Beam me up, Scotty,” land in Canada, and receive treatment immediately, I would choose to go to Mexico City. I hold nothing against Canadian doctors and nurses, but the treatment in Mexico includes a higher level of caring. Of course, we have private insurance. With a private plan, they can afford to take their time, while the financial constraints of a socialized system turns people into numbers. (Like Canadians, most Mexicans participate in the government’s system [Instituto Mexicano del Seguro Social, or Mexican Social Security], which is no different from any other government-provided health care, in that it’s better than nothing.)

We are not wealthy, but our finances stretch farther here than they could in Canada. Never mind that it is cheaper, the produce available year-round in Mexico is superior to what we found in Calgary supermarkets.  In some ways Mexico is like taking a step back in time and overall our quality of life is just better, more relaxed. I would never say that Canadians are an unfriendly bunch, but the warmth of the Mexican people is contagious.