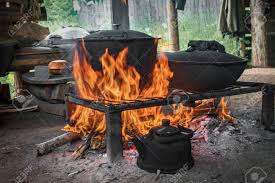 Today, perhaps more than any other time in human history, food has been elevated on a cultural pedestal of reverence. The depth of knowledge and appreciation for a wide variety of cuisines among so many people seems to be a cultural characteristic of our times. Celebrity chefs, food shows and food networks, never mind food pictures posted on Instagram, are only a few of the many indicators of this interest. The term “foodie” was first coined in the 1980s and is now in common use. The American Heritage Dictionary defines a foodie as “a person who has an ardent or refined interest in food and who eats food not only out of hunger but due to their interest or hobby.” Travel, immigration, and the abundance of food and ingredients from all over the world have all had a hand in this current cultural obsession with food and cooking. However, today’s modern hipsters of cuisine are only the most recent green sprig of growth in the long history of cooking.

Our evolutionary record shows the harnessing of fire coincided with the growth of the human brain relative to body size. This development took place roughly 1.9 million years ago. Harnessing fire had multiple benefits to humans, but chief among them was that it allowed the cooking of food. Cooking food increases the caloric value and reduces the energy required to digest it. Cooking food also enabled early humans to eat certain tubers and roots that were otherwise inedible.

I think it safe to assume that grilling was the first cooking method. Studies of primitive tribes, even today, show how an animal is cooked (it’s estimated that there are more than a hundred “uncontacted peoples” worldwide, half of them in the Amazonian jungle). The entire carcass is thrown onto the open fire. The fire, along with some scraping, removes the fur. Then as bits of the animal are deemed cooked, they are cut or torn from the carcass and consumed. It’s easy to see the direct lineage of this form of cooking to the tossing of a piece of meat onto the barbeque today.

The earliest dishes beyond grilling were probably soups and stews. There is some evidence from Japan dating back 10,000 years of a type of stew made by putting flesh and water into an animal’s paunch and boiling it over a fire. No doubt soups and stews were being made much earlier than this. Once mankind had figured out how to cook in a container of some sort, it only made sense they began boiling up bits of almost anything they could find.

There is an ancient tradition in Oaxaca – still practiced – of making “stone soup.” National Geographic has a documentary showing this
(https://www.nationalgeographic.com/travel/intelligent-travel/2010/10/04/mexicos_stone_soup/). The cooking method consists of putting water, vegetables, and fish into a smooth rounded depression in the rocky ground. Then a stone is heated on a fire before dropping it into this natural cauldron, and the soup is cooked. It’s easy to imagine how different flavors were discovered by experimentation or by chance when something new was added to the soup or stew.

Let’s not forget about bread. Archaeologists in Jordan have found the remains of flatbread made with wild barley and plant roots – about 14,000 years old, it predates agricultural practices by thousands of years. Societies all over the world have independently found ways to make bread. Mash up grains, add water to make a paste, fry on a hot rock – and presto! For example, the original inhabitants of what is now California developed a complex procedure to make flour for flatbread out of acorns. Source material for bread was everywhere once man learned to harness fire.

Harnessing fire and cooking required greater social organization and division of duties – there had to be fire tenders, wood gatherers, hunters, etc. A central fire also brought people together for longer periods, especially at night, which increased social complexity and likely helped in the evolution of language.