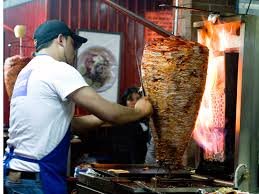 Yum! One of my favorite Mexican dishes is Tacos al Pastor, layers of marinated meat, slow-cooked on a spit with a vertical flame, slivered up and served on a warm corn tortilla with all the side fixings. The spit, called a trompo (“spinning top”) in Spanish, slowly rotates as it cooks the al pastor, which in Mexico is usually pork. Marinades vary, but can mostly be classified as “adobo,” which includes achiote and ground red guajillo chilies, resulting in the reddish colored meat. The pastor part, which means “shepherd,” is derived from the verb pastorear (“to herd”), as this fixture in Mexican street food is actually Lebanese in origin and the corresponding meat was lamb (pigs are not herded). In the Middle East, the dish is called “shawarma,” and originally consisted of spiced lamb roasting on the slow-turning spit and served on pita bread; when it arrived in Mexico, the pita eventually became a wheat flour tortilla (as in tacos árabe). This method of cooking on a rotating spit is also customary in Greek food, e.g., the gyro (think gyroscope), a meat sandwich of beef, veal (oh no, not a fatted calf), lamb, pork, or chicken.

Records show that the first Lebanese arrived Mexico in 1892, initially concentrating around Puebla and to a lesser extent Mexico City and the Baja. At the time, Lebanon was not a distinct country but part of the immense Ottoman empire. The immigrants were largely Christians fleeing political persecution, and they rapidly assimilated in Mexico.

The first Middle Eastern restaurant in Mexico was opened in Puebla by Yerbagues Tabe Mena y Galeana in Puebla in 1933. Called “La Oriental,” it was located at Avenida 16 de septiembre, #303. Since lamb apparently was difficult to find and expensive, and since the Mexicans preferred pork, the family quickly adapted. Traditional Lebanese spices, such as caraway, cardamom, nutmeg, and ginger were gradually replaced with Mexican spices but tacos árabes are in part defined by the wheat flour tortilla, not corn.

The restaurant moved to its current location near the zocalo in 1942; it’s at Portal Iturbide, #5. The sign reads “La Oriental: la cuna del taco Árabe” (“The Eastern: the birthplace of the Arab taco).

Speaking of spices, there are numerous spices not originally Mexican but over the centuries and decades have found their way into Mexican cuisine, e.g., cumin (comino in Spanish) and cilantro.

Cumin, which seems indispensable in so many Mexican dishes, is in fact from the Mediterranean, introduced to Mexico by the Spanish conquistadores. Cilantro (called coriander when you are referring to the seeds) is related to cumin, as they are both in the carrot/parsley/celery family. Although its origin remains uncertain, it is also most likely from the Mediterranean and it has been in use as a spice and as a medicinal plant for about 5,000 years. There are references to the use of coriander in the Old Testament (in Exodus) and The Arabian Nights. Coriander, too, arrived in Mexico with the Spaniards, along with cinnamon (canela) and cloves (clavos).

Who are some famous Mexicans of Lebanese origin?

Number Uno has to be Carlos Slim Helu, better known as Carlos Slim. I have to assume, dear readers, that most of you know he is the 5th-richest person in the world, the wealthiest Latin American and worth about $68.9 billion US dollars, but did you know he is of Lebanese descent? Slim is the son of Julián Slim Haddad (born Khalil Salim Haddad Aglamaz) and Linda Helú Atta, both Maronite Christians from Lebanon. Slim’s father emigrated to Mexico from Lebanon at age 14, apparently to avoid conscription in the Ottoman army, making Slim first generation on his father’s side. His mother was from Chihuahua, but both her parents were also Lebanese immigrants. The Soumaya Museum in Mexico City – and most of its contents – are the gift of Carlos Slim.

The actress Salma Hayek Jiménez, aka Salma Hayek, is also of Lebanese descent. She was born in the state of Veracruz, Mexico. Her father, Sami Hayek Domínguez, is Lebanese, having emigrated from the city of Baabdat, Lebanon. Her mother, Diana Jiménez Medina, is Mexican/Spanish (her maternal grandmother and great-grandparents were from Spain).

The supermarket Chedraui, aka Super Che, is one of the two big box stores in HuatuIco and is part of a chain of super stores founded by the Lebanese immigrants Lázaro Chedraui Chaya and his wife Ana Caram in 1927 in Xalapa, Veracruz. First known as Port of Beirut, this highly successful chain now includes stores in the United States in California, Arizona, Nevada, and Texas, under the names El Super and Fiesta Mart.