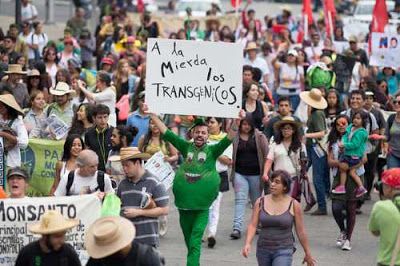 Andrés Manuel López Obrador (aka AMLO), president of Mexico, recently called on Mexican farmers to stop using the herbicide glyphosate by 2024. By his final executive order of 2020, AMLO made a surprising decree to phase out both genetically engineered corn (GE, maíz transgénico), often referred to as GMO, or genetically modified, corn, and the use of the herbicide glyphosate.

Glyphosate, commercially known as Roundup, is a non-selective herbicide in that it kills all herbaceous (non-woody) vegetation to which it is applied. GMO corn, however, has been genetically modified to tolerate glyphosate. This creates a market cornered by the multinational agro-chemical giant Monsanto (bought out by Bayer in 2016), as they produce both the genetically modified corn (among other crops) and the herbicide. The national campaign, known as “Without Corn There is No Country” (Sin Maíz, No Hay País), and Greenpeace Mexico support the initiative that opens a path to eventually eliminate the use of glyphosate in Mexico by 2024. They urged AMLO to sign and publish the decree in the government’s Official Gazette of the Federation (Diario Oficial de la Federación), which occurred on December 31, 2020.

According to Reuters (May 24, 2021), the decree has held up: “A Mexican federal judge ruled against a request by the National Farm Council to freeze a government plan to ban genetically modified (GMO) corn and the widely used herbicide glyphosate by 2024, the national science council said on Monday. Judge Martin Adolfo Santos Perez’s ruling allows the executive order issued by President Andres Manuel Lopez Obrador late last year that outlines the planned ban to proceed.”

This is a huge economic issue. Since the passing of the North American Free Trade Agreement (NAFTA) during the Clinton administration (1992), there has been a catastrophic decrease in domestic production, particularly of what we would call heirloom corn (maíz criollo) by small farmers who could not compete with the industrially-produced U.S. corn that poured into Mexico after passage of NAFTa. (An essential read on the subject is Eating NAFTA: Trade, Food Policies, and the Destruction of Mexico, by Alyshia Gálvez [Oakland, CA: University of California Press, 2018]).

On the Mexican side, President Carlos Salinas de Gortari signed NAFTA betting that privatizing the economy and relying on market forces would modernize and grow the country, so to speak. This has not quite worked out as planned. Of the 20.4 million metric tons of corn imported by Mexico from the United States during from 2018 through March 2020 – 95% of it yellow corn, and 78% of it (16 million tons) in 2020 alone. According to Mexico’s national feed association (CONAFAB, Consejo Nacional de Fabricantes de Alimentos Balanceados y de la Nutrición Animal), Mexican feed companies used about 11.1 million tons of imported corn in 2020, the vast majority of it sourced from U.S. farmers; U.S. corn represented nearly 70% of the sector’s total corn purchases for the year.

What remains unclear as of this writing is that, although the ban would eliminate GMO corn for human consumption, the decree did not clarify what products would be included and it appears that feed corn would be exempt from the decree.

On the other hand, and as the wagons circle, the executive decree of course has its detractors. Mexico’s national association for Crop Protection, Science and Technology (PROCCYT, Protección de Cultivos, Ciencia y Tecnología), among others, rejected the order. PROCCYT warned that “the greatest economic and social blow will be dealt against Mexican farm workers, by promoting the publication of the Decree by which any possibility of import and use of glyphosate to protect food crops, despite the fact that it is scientifically proven that this herbicide does not harm health or the environment.”

But supporters of the decree have vowed to “defend our corn, since Mexico is considered the center of origin, domestication and diversification of at least 64 breeds of corn, and more than a thousand other species, including chili, beans, squash, vanilla, cotton, avocado, cocoa and amaranth.” The origin of corn is indeed Mexico, and more specifically the state of Oaxaca, where it was cultivated from its ancestor, the wild plant known as teosinte. Corn has achieved its current robust form over 8,000 years of plant breeding (my three-part article on the history of corn in Mexico appeared in The Eye in 2012).

Although there are few valid studies that link glyphosate to human health problems, the selective breeding of corn just for the ease of industrial production and the associated resistance to herbicides (and maximum profit) is anathema to Mexican culture, and has resulted in loss of nutrition and exhaustion of the soil as a natural, living resource. This depleted soil now relies on huge inputs of commercially produced, high nitrogen fertilizer, accompanied by its own suite of environmental problems. And the summer sweet corn we are accustomed to eating in the USA is mostly water and sugar and tastes nothing like the street corn – esquites y elotes – we find locally.

From this writer’s perspective Mexico has taken a big, progressive step forward.