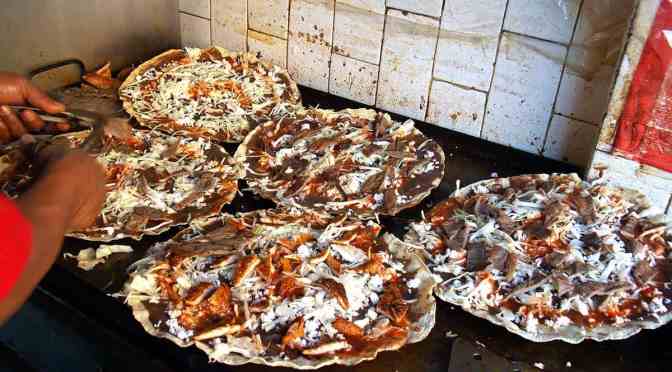 The state of Oaxaca is acclaimed for its gastronomic greatness, boasting some of the most distinct and delectable cuisine in all Mexico. In addition to the region’s famed moles, food stuffs range from grasshoppers to gusanos, tejate to tlayudas, and Oaxaca’s signature quesillo. While other parts of Mexico are noted for distinguishing dishes, Oaxaca stands apart from the rest for the sheer number of inimitable culinary innovations. The variety of inventive ingredients and their combinations produce unique flavors, and an opportunity to embrace the non-traditional.

Mole Much More than Negro

The phrase “seven moles of Oaxaca” is a misnomer, though the initial suggestion of a fixed number undoubtedly did bring notoriety to the breadth of these thick sauces. Mole negro is the most renowned because of the unique combination of chiles and chocolate, the sheer number of ingredients used to make it (generally between 30 and 35), and the labor intensity of its preparation, taking at least a couple of days if made true to tradition. But there are innumerable other moles, varying in flavor depending on the region (ready availability of ingredients) and family tradition, though they are typically broadly categorized as one of the seven.

A key feature of Oaxacan moles is that in most cases they are made independent of the chicken, turkey, pork, seafood or beef; a contrast with stews. Some moles keep well refrigerated for a few days or even months if frozen (i.e., mole negro), while others are best eaten the day they are prepared so that the flavors of the herbs and spices maintain their individuality on the palate (i.e., mole verde). Still others lose their distinctiveness if prepared without a signature component (chile chilhuacle in the case of mole chichilo).

Chapulines, or grasshoppers, are the best known Oaxacan food next to mole. They are sold on the street and in the markets. They are most frequently eaten as a snack food, just like a bag of potato chips. However, they are also served as part of a mixed appetizer plate, in addition to being incorporated into recipes for salsas and dips, adding a unique essence. While chapulines are available year-round, discerning Oaxacans, mainly in the villages and towns, will only eat them when they are fresh, meaning harvested throughout or at the end of the rainy season. Otherwise, most of these high hoppers are imported from outside of Oaxaca’s central valleys, often from the state of Puebla. They’re a uniquely flavored high protein snack worthy of at least sampling.

Gusanos are actually larvae, an infestation of the maguey (agave) plant used to make mezcal. The gusano is best known as “the worm” that is at times encountered at the bottom of a bottle of mezcal, by design of course. However, like chapulines, they constitute an ingredient in some salsas, and are also used in other recipes. One purchases gusanos either dried or as live crawlers. In both cases they are usually crushed before use in recipes. Sal de gusano (worm salt) is used to rim glasses for cocktails, sprinkled on fresh fruit to bring out flavor and sweetness, and served alongside lime or orange wedges to chase shots of mezcal.

While technically a beverage rather than a food, tejate is worthy of comment because it’s virtually always encountered in markets, both indoor markets in the city and nearby towns, and outdoor weekly marketplaces. Women dish out the drink from oversized green glazed clay basins to passersby electing to have it ladled into plastic drinking cups “to go,” or into large half gourds known as jícaras. The drink is usually beige in color with a foamy film, having the appearance of a sink of water with spent shaving cream floating atop. But don’t let the look dissuade. Consider tejate a pre-Hispanic mocha frappe. The high-energy drink is made with corn, cacao, the flower of an aromatic plant, the seed of the tropical fruit mamey, yes, a bit of ash, and sometimes small amounts of a seasonal nut, with sugary water added for the asking. Its arduous preparation yields a truly distinguishing taste.

For Mexicans, tlayudas are synonymous with Oaxaca, and only Oaxaca. They’re prepared and eaten both on street corners (usually at night) and in restaurants. A tlayuda is an oversized semi-crispy corn tortilla, served either open faced or folded over into a half moon. The super-sized tortilla is filled with a thin layer of asiento (rendered pork fat), bean paste, lettuce, tomato, cheese, and either tasajo (thinly sliced beef), cecina (thinly sliced pork with a crushed chile mix dusting) or chorizo (Mexican sausage). The meat is sometimes served alongside the tlayuda rather than inside or on top. A unique feature of the tlayuda is that it’s often grilled directly over hot coals. Snacking on a tlayuda with friends and family late at night is as ritualistic as it gets in Oaxaca. For the asking, eateries will prepare a vegetarian or even a vegan tlayuda.

Queso is Spanish for cheese. But in Oaxaca queso connotes a fresh cheese much like cottage cheese (compacted dry as distinguished from the commercial loose curd product) or feta. But quesillo is totally different. It’s string cheese, eaten most often by the small piece when a component of a mixed appetizer platter, or melted as an ingredient in another dish, after being thinly shredded. Hence it’s the key ingredient in quesadillas and queso fundido (cheese fondue), and usually an integral part of a tlayuda.

Embrace the Opportunity to Sample It All When Visiting, Even If Only for a Day

Spending just 24 hours in the city of Oaxaca provides ample opportunity to pry loose an otherwise uninspired palate. Walk through any marketplace, certainly the famed Benito Juárez downtown market, nibbling on crunchy chapulines, then stop for a refreshing drink of tejate. After strolling, lunch at a local eatery, making sure to order the comida corrida (inexpensive complete meal with a selection of local cuisine from which to choose, served uncharacteristically fast), invariably including the restaurant’s best mole. Consider starting the meal as Oaxacans often do, with a shot of house mezcal served with lime or orange, and yes, sal de gusano. After sightseeing, followed by a well-deserved rest for body, soul and culinary constitution, head out for a late night tlayuda laden with quesillo.

Whether in the city or a coastal town, imagine the breadth of deliciously different gastronomic delights awaiting you with a whole week (or lifetime) to spend indulging in Oaxaca’s exquisite cuisine.