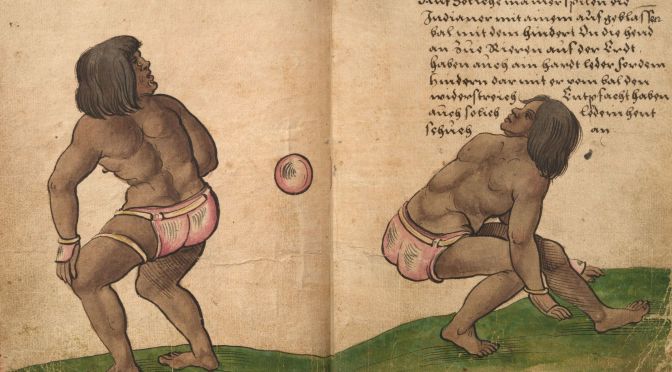 It’s Mexico’s oldest sport, played formally with rules, courts, and rituals for at least 3,000 years, and informally for a millennium or more before that – it’s also the world’s oldest team sport. While the folks of the “Initial” and “Early Formative” periods in Mesoamerican culture (1900-1000 BCE) played all kinds of ballgames, with all kinds of balls, when we say “Mesoamerican Ball,” we’re talking about a sport that is thought to have originated in the lowlands of Mexico, Guatemala, Belize, Honduras, and El Salvador, probably because that’s where the rubber for the rubber ball was most common.

Mesoamerican ball (ōllamalīztli, ōllama in Nahuatl, pitz in Classic period Maya) is a fundamental feature of pre-Columbian culture in the region – archaeologists have identified nearly 2,500 ball courts (tlachti in Nahuatl), with the oldest known court (originally thought to be from about 1400 BCE, but recently redated to 1650 BCE) in Paso de la Amada in the coastal lowlands of Chiapas.

The oldest court in the Mesoamerican highlands dates from 1374 BCE, and was just found in 2020, under another ballcourt in San Mateo Etlatongo by Jeffrey P. Blomster and Victor E. Salazar Chávez, archaeologists from George Washington University. (Etlatongo is 90 km (54 miles) northwest of Oaxaca City, off Routes 190 and 135D.)

Of course, discovering the second oldest Mexican ball court in the Oaxacan highlands has upended the idea that the game came from the lowlands, so the academics are in a bit of a tizzy right now. We, however, are happy that the discovery tells us more about the sport itself.

How to Play (Really Ancient) Ball!

That ballgame was there at the creation, so to speak, as part of the origin myths of the Mayan people recorded in the Popol Vuh, an ancient sacred text of the Maya. The version we have was prepared from oral recitations of the story, first (most probably) as a phonetic rendition by a Spanish scribe in Santa Cruz del Quiché, Guatemala, sometime after 1524, when the area was conquered Pedro de Alvarado. No one’s ever found any such manuscript, but we do know that the priest Francisco Ximénez, who served in Santo Tomás Chichicastenango (or Chullá or Chilá), prepared a manuscript of “the histories of the origin of the Indians of this province of Guatemala.” It was “translated from the Quiché language into Castilian for the convenience of the ministers of the holy gospel.” The Ximénez document, produced between 1701 and 1703, put the phonetic version on the left and Spanish on the right. Given the Spanish penchant for destroying indigenous documents and artifacts, it is a remarkable contribution to what we know of ancient Mayan thought.

And what does the Popol Vuh have to say about the ballgame? Not all that much about the rules, although it implies sacred, political, and ritual components of the game.

Hun Hunahpu and his brother Vucub Hunahpu are playing ball on a court set up by the lords of the underworld, Xibalba. The noise of the brothers’ game annoys the lords; when the brothers fall asleep, the Xibalba lords capture them, kill them, and bury them in the ball court. All except Hun Hunahpu’s head, which they hang in a fruit tree. Along comes a goddess, and Hun’s head spits into her hands; she becomes pregnant and bears his sons, the Hero Twins, who through a series of adventures, end up in a ballgame with the lords of Xibalba; the Twins win.

The myth links the ballgame with overcoming death, with heroic mortals overcoming underworld deities on a field that links death with life, thus creating the universe in which we mortals live in.

As for how the game was, is, and would be played in our time, the Popol Vuh doesn’t really tell us. What we do know is that it was played in different ways in different places; our information comes from the balls themselves, of various sizes; excavated ball courts, with bouncing walls (rather like handball) or rings mounted high on the wall (rather like basketball); paintings of ball games, even in places where no ball courts have been found; remnants of pottery figurines of ballplayers showing the player wearing a protective yoke, with a loincloth below (confirmation that the hip-ball version, rather than hand- or foot- or stick-ball, was predominant); human vertebrae (confirmation of the notion that losing a ball game could be fatal).

The games were played sometimes one on one, or in teams of up to four players. In places with no upper goal rings, the point is to keep the ball in play. Scoring is very complicated – when one team allowed the ball to go out of bounds, the other team scored. If a player let the ball bounce twice before returning it to the other team, a penalty. With goal rings, some think a failed attempt penalized the team that tried, when the ball actually went through the ring, the game was over. Others think the goal ring, which was a difficult target for a hip-shot ball, was just for bonus points.

As for the human sacrifices, certainly foreshadowed in the Popol Vuh, sometimes yes, mostly no. There’s evidence that the upper classes played the game, so sacrifice was out. As the ballgame moved from the Maya to the Aztecs, however, issues of war and prisoners of war became more prominent, and sacrifice was in. There is evidence of human sacrifice at the huge Zapotec ballcourt at Monte Albán, but doubt as to whether it was the winners or losers who were sacrificed. At Chichen Itza, home to skull racks and unconfirmed rumors that the game was played with severed heads, it’s definitely the winning team that gets done in.

We don’t know much about the size or weight of the balls used in play, although the ball is responsible for the “lowland paradigm” among archeologists, i.e., that because the Panama rubber tree (Castilla elastica) grows along the coast, the game developed there. And wrapping around the rubber tree was the white moonflower (Ipomea alba), a night-blooming morning glory. Combining the sap of these two plants created a particularly bouncy rubber, which fascinated the Spanish conquistadors – rubber was virtually unknown in Europe at the time.

It may have been the ball more than the game that led Hernan Cortés to take a team of indigenous players back to Spain in 1528, seven years after the Conquest, when he went to plead his case for continuing to rule Mexico (even some of the Spanish found the destruction of the Aztec Empire unnecessarily brutal). While Cortés brought many “wonders” back to the Spanish court, the ballgame – especially the bouncing rubber ball – was apparently a big hit. Columbus might also have brought rubber balls back to the Spanish court, but not accompanied by teams of barely clad but completely literate, extremely athletic players – we even have a 1528 drawing of them at play!

Although the clergy present supposedly muttered about human skulls in the core of the ball, two representatives from the Nahua teams (we know one was Benyto Maçatlaquemi – the scanty records do not name the second) went off to visit Pope Clement VII. They had learned both Spanish and Latin, as well as Court and Vatican etiquette – Cortés presented them as gentlemen scholar athletes, in their finest indigenous clothing, dyed scarlet with cochineal, iridescent with quetzal feathers. Clement bounced the ball, and cardinals laughed. Clement bestowed on the Nahuas the usual Vatican gifts, e.g., Italian clothing, but he also gave each of them a gold chain, a mark of rank and status, made by the most noted goldsmith in 16th-century Rome, Pompeo de’ Capitaneis. Clement prepared four papal bulls in the wake of the ballplayers’ visit: he established churches for indigenous peoples in Mexico City, in Culhuacán and Tlatelolco, now parts of Mexico City, and in the neighboring state of Tlaxcala.

The Vatican’s goals were to teach indigenous peoples how to read and write Spanish, to preserve indigenous languages in the Roman alphabet, and to encourage indigenous peoples to write their own histories. These goals were undertaken by the Jesuit priests of New Spain; their efforts are generally credited with the creation of Latin American humanities. It should be noted that the influence went both ways – crimson-dyed clothing and featherwork became very popular across Europe.

Mesoamerican ball is still played in a number of Latin American countries, both at home and against each other. An exhibition game was played at the 1968 Olympics in Mexico City (see article elsewhere in this issue).

Now called “pok ta pok,” after a 1932 adaptation by a Danish archaeologist from a Yucatecan word, as often as “ulama,” the sport’s last World Cup (the third) was won by the Black Jaguars of Belize, beating out El Salvador, Mexico, Panama, Guatemala, and Honduras. The Mayan Ball Game World Cup is held every two years – if COVID allows, the fourth World Cup is coming right up in Mérida, in the Yucatán, December 2-6, 2021.

At the Xcaret eco-archaeological park, there’s an ulama court where exhibition games are played. Mexico City has an ulama court where amateurs form up teams to play matches. And Mexico’s Secretariat of Culture has been urged by other government agencies to “formulate, establish, or evaluate the candidacy of the ulama tradition that comes down from the pre-Hispanic Mesoamerican ball game, practiced in some Sinaloa communities,” to be considered for UNESCO’s designation as an intangible cultural heritage.