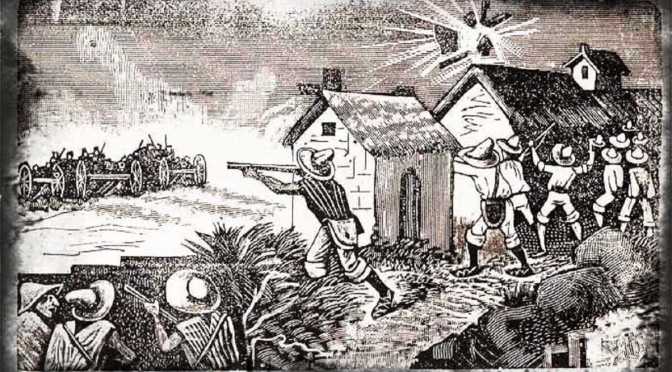 When you think about the Mexican Revolution, the larger-than-life characters typically come to mind: Emiliano Zapata in the south, Francisco (Pancho) Villa in the north. Before the Revolution, there was plenty of unrest and dissatisfaction with the centralized Mexican government led by José de la Cruz Díaz Mori. Near the border with the United States, pro-revolutionary, anti-Porfirio exiles living in El Paso and vicinity helped foment revolution through a variety of publications, also intended to gain support from the US Government. One of these Mexican expatriates was the inventive engineer and newspaper editor, Lauro Aguirre. (You can learn more about Aguirre in The Hummingbird’s Daughter, a wonderful book by Luis Alberto Urrea.)

After reading The Hummingbird’s Daughter, I became interested in the Rebellion of Tomóchic (1891-92) and the border unrest. This area, located in the state of Chihuahua, includes the Sierra Madre Occidental and the famous Copper Canyon (Barrancas de Cobre), home to the Tarahumara, or Rarámuri. It has always been geographically isolated, and essentially autonomous even after the Spanish conquest. Before the rebellion, the Tomochitecos resisted exploitation by the Spanish-descended hacienda owners (land barons) and mining companies. Constant unrest included land and property ownership conflicts as well as on-going threats by the Apache tribes from the north. Local skirmishes also resulted in violent conflicts with Mexican federal forces.

Around 1890, the community of Tomóchic became under increased scrutiny due to the rising fame of Teresita Urrea, the daughter of the Hummingbird (also the author’s great aunt), and the town’s adoption of her as their patron saint. Although she never set foot in the town, she was perceived as a Saint due to her purported healing abilities and posed an existential threat to the Porfirio regime solely due to her following, despite her claims to be apolitical.

The Catholic Church never had a strong presence in this remote region due to the lack of permanent priesthoods in isolated areas. This led to a vacuum of leadership and an atmosphere ripe for the cultivation of ‘saints’ to whom the locals attributed miracles due to their presumed direct communication with God and associated power. The only way for the Church to combat the dissemination of these alternatives to Catholicism was through the rare presence and ranting pontifications of priests in the Sierra Tarahumara. This situation became complicated since religious dissent was tied to notions of social justice and the “saints” provided guidance and comfort to the Tomochitecos suffering from exploitation and precarious socioeconomic conditions.

Since the early 1800s, the Porfiriato and the Church had both been trying to strengthen and centralize their control of remote regions. With the arrival of the railroad on the Chihuahuan border with the U.S., American exploitation of the area’s natural resources, particularly timber, took off. On December 1, 1891, Tomóchic staged an organized rebellion and declared its autonomy.

Although viewed by some historians as a precursor to the Revolution, other historians viewed the rebellion as a local affair, mestizos rebelling against their lighter-skinned, exploitative oppressors and the Church.

The story is told that the first time federal troops arrived in Tomóchic, they had talked themselves into a fright at the thought of facing the savage rebels. They were confused when they were met by a silent line of thirty women, all dressed in black, advancing slowly closer. The women dropped their black shawls, revealing themselves to be men, whipped out their Winchesters, and shot down the front line of troops. Nonetheless, after a year of confrontations with Porfirio’s troops, the rebellion ended with the annihilation of the entire town.

The Role of the Hummingbird’s Daughter

As noted above, the Tomochitecos were followers of Teresita Urrea, the Saint of Cabora. Before the uprising she had participated in other so-called insurgent movements, as defined by the federal government, that addressed social justice, particularly for the poor. She was demonized by an itinerant Catholic priest, offending the locals, and thereby planting the seeds of confrontation with the church. (Before the Mexican Revolution [1910-20] the church and the government were one state, intertwined and codependent.)

The true influence of la Santa de Cabora in the uprising has never been clear, as the entire town was destroyed during the conflict, along with most witnesses. Teresita Urrea and her father, perceived as a threat to the federal government, were exiled (or fled) to the United States. The Porfirio regime believed that if they had been executed in Mexico, it would have led to intolerable and counterproductive martyrdom. The Mexican Revolution had yet to be born, but this conflict undoubtedly fueled the flames of discontent.

If you are interested in reading more about the Rebellion of Tomóchic, check out these sources:

Frías, Heriberto. The Battle of Tomóchic: Memoirs of a Second Lieutenant, translated by Barbara Jamison. New York, NY: Oxford University Press, 2006. This is a historical novel by Frías, based on his experiences in the Rebellion of Tomóchic. The author sharply criticizes the actions of the federal government in crushing the Rebellion.
Urrea, Luis Alberto. The Hummingbird’s Daughter. New York, NY: Little, Brown and Company, 2005. Queen of America. New York, NY: Little, Brown and Company, 2011.
Vanderwood, Paul J. The Power of God against the Guns of Government: Religious Upheaval in Mexico at the Turn of the Nineteenth Century. Stanford, CA: Stanford University Press, 1998. This is a broader (academic) view of the Mexican Revolution and how the Rebellion is a key precursor to it.

If you are interested in Mexican music, the corrido, or heroic ballad, achieved its high point during the Mexican Revolution; “El Corrido de Tomóchic” is considered the first revolutionary corrido.