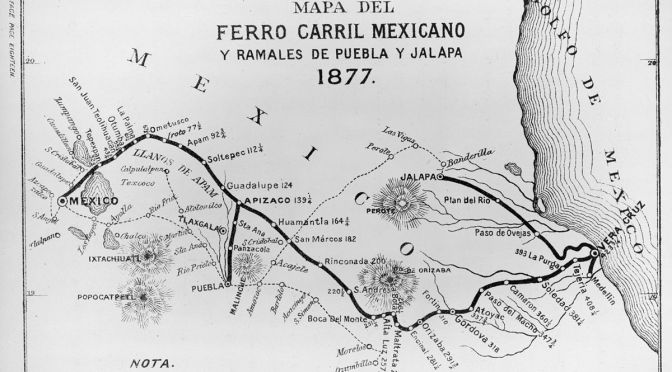 The human emotions and social processes that stir revolutions are similar across time. But the particular strategies and tactics used by revolutionaries and counter-revolutionaries differ over time, based on the technology that then exists. The Mexican Revolution of 1910 occurred in the midst of technological revolutions as well.

Ironically, several of the key new technologies were fostered and promoted by the dictator José de la Cruz Porfirio Díaz Mori, but were turned against him and used to abolish his thirty-year grip on Mexico. These included the development of the national railroad system, the importation of easily loaded rifles, and the advent and refinement of photojournalism.

Although plans for the first railway line in Mexico – between Veracruz and Mexico City – had been drawn in 1837, intermittent political upheaval prevented final construction until 1873. The line was inaugurated by President Sebastián Lerdo de Tejada, who was Porfirio Díaz’s immediate predecessor. During Porfirio Díaz’s regime, the railroad system in Mexico grew from slightly over 640 kilometers to over 24,700 kilometers. The populace of Mexico was outraged by Diaz’s reliance on financiers from the US, Britain, and France to build this system. In addition, the new railroads reaching from Mexico City to Texas, linking cities along the Pacific Coast, branching into cities along the gulf coast, and crossing the Sonora desert, essentially united previously isolated communities.

Just as in the French revolution, where rallying cries to overthrow the government traveled along river routes, in Mexico the sparks of revolution literally and figuratively traveled over rail routes. Díaz’s pride in his realized dream of bringing modern transportation to Mexico turned into his nightmare. Not only did the railways provide easy mobility to the revolutionaries, but the vast number of Mexicans recruited for railway building and maintenance created a new labor class in Mexico. Added to the oppressed agricultural workers, who comprised a significant number of those rebelling against the Díaz administration, the railroad workers united to aid the campesinos with transportation, arms, and formidable strength in battles.

Just as the railroads were produced by foreign investors, many of the arms used in the revolution were foreign imports. These included swords from Spain and the U.S. and Bowie knives from Texas. But perhaps the deadliest weapons to turn the tide in the revolution were Winchester rifles that flowed into the hands of the revolutionaries from border cities in Arizona and Texas. Although rifles and gun powder were known in China as early as the 10th century, firearms had been cumbersome to use, since the ammunition needed to be loaded through the muzzle and the rifle had to be primed between shots. In the mid-18th century, American ingenuity produced the Springfield rifle, which was loaded from the breech and eliminated the need to prime the weapon, thereby reducing the time between shots. Not long after, the Springfield rife was modified so that more bullets could be loaded through the breech and multiple shots could be taken before recharging.

As with many new inventions, the advent of this new technology stimulated others in the industry to copy and improve on the rifle design. Díaz was impressed with a Mexican rifle design that he thought likely to provide state-of-the-art weapons, since it had a high-pressure round. He contracted with a Swiss munitions company, SIG, to produce several hundred rifles called “Mondragons” – the name of the designer. The high-pressure feature of the Mondragon failed to live up to its potential and the Mondragon was modified by a British company to incorporate a Mauser 7mm. The head of SIG warned Diaz that marriage of the Mondragon with the Mauser was a huge mistake, but Díaz ordered 4000 of the rifles, renamed the Porfirio Díaz Mondragon, for his army. The warning of SIG turned out to be right on the mark, and the rifles were a colossal failure.

At the same time, the Winchester Repeating Arms Company in Connecticut developed its series of level-action carbine rifles. The 30-30 model was released in 1895 and proved such a sound technology that the rifle, with some modifications, is still manufactured today. The Winchesters flowed into Mexico and into the hands of the revolutionaries, notably into the hands of the notorious Pancho Villa, and was so revered by the revolutionary armies that they literally sang its praises:

With my 30-30
I’m leaving
To join the ranks of rebellion
If my blood asks, I give blood
For the inhabitants of our nation.

Winchester-carrying revolutionaries, both men and women, posed in front of trains and captured the fancy of viewers around the world. The photo journalists who romanticized the uprising and the overthrow of Díaz were themselves an outgrowth of a new technology fostered by Díaz. Photographic propaganda was first introduced in Mexico by the French during the short reign (1864-67) of Emperor Maximillian. The strategy of creating a sympathetic portrait of the Emperor through photography was decidedly not successful, since in the end he was executed by firing squad. Nevertheless, Díaz saw the potential of recording the advances his administration was achieving in modernizing Mexico, and he hired some of the most renowned photographers in the country, including Frida Kahlo’s father Guillermo. In addition, Díaz commissioned them to photograph Mexico’s natural wonders to promote tourism.

Toward the end of the 19th century, Rafael Reyes Spíndola, who owned several newspapers, began using photos to accompany the stories in his papers, Díaz made sure that his accomplishments were front and center. The only other photojournalism stories that were condoned were society events such as weddings and balls. But once again, Díaz’s promotion of a new technology was turned against him. When the revolution began, such picturesque studies emerged that photojournalists from the U.S. and Europe flocked to Mexico to record the revolution. While Díaz captured the investors of the world in his determined push to modernize Mexico, the rest of the world was captivated by the scenes presented by the photojournalists – the horrors of war, the plight of the poor, and the determination of the Mexicans to free themselves from the domination of Porfirio Díaz. And so, with the railroads Díaz created, the use of modern weaponry Díaz promoted, and the support of sympathetic readers of photojournalistic accounts of their struggle, they did.