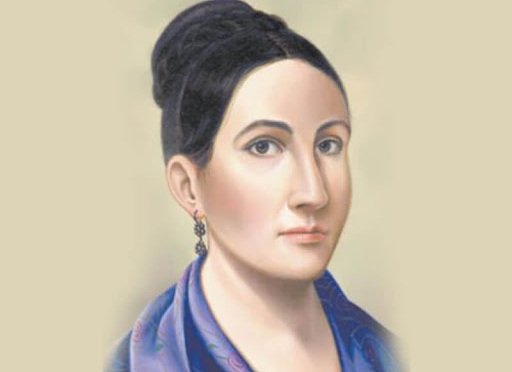 Josefa Ortiz de Dominguez was an intelligent, formidable, and outspoken woman, exceptional even given the time and place. She was a leader, along with her husband Miguel Dominguez, in Mexico’s fight for independence from Spain, which began in 1810 and lasted 11 years.

She was born in 1768 in Morelia, Michoacán, to a middle-class family of Spanish descent, and was thus by definition a criolla. Her father, a regiment captain, was killed in battle when she was very young. After the death of her mother, also when she was young, her sister took charge of Josepha’s education and enrolled her in the Colegio de San Ignacio de Loyola, where she learned to read and write, along with the basics of mathematics. As was typical for the era and in preparation for an inevitable role as a future ama de la casa (soul of the household), she also learned household responsibilities and skills, such as embroidery.

In 1791, at the age of 23, she married Miguel Domínguez, who at the time served as an official of the government of New Spain. He was appointed Corregidor of Querétaro in 1802, a local administrative and judicial official (based on Roman law). As a representative of the crown, he provided an essential, respected, and powerful link between the territorial government and the Spanish crown.
Following their marriage, Josepha, now called La Corregidora, joined her husband in the growing conspiracy to overthrow the Spanish crown. Organizational meetings were held in the couple’s house, under the pretense of being tertulias, or intellectual gatherings, which, due to his position, Don Dominguez did not attend in person. Although passionate about and committed to the cause, Josepha continued with her duties as head of the household, customary and expected, and included the education of her two adopted children (his first wife had died) and their additional eleven children. Their marriage endured until Miguel Dominguez died in in 1830.

Back to the clandestine meetings – Josefa increasingly aligned herself with radical groups, and although risky, the organizational meetings in the Domínguez household continued. Ironically, Don Dominguez was directed to intervene on behalf of Spain. Pretending to carry out their orders, but aware of the impending danger, he confined his vocal and opinionated wife to her room in an attempt to limit her communication with the other co-conspirators. His family was in jeopardy. His wife’s strong beliefs, however, were already known to the authorities.

In early September 1810, she prepared a letter, disguising her handwriting, and managed to get it to co-conspirator Ignacio Pérez in the house next door. She meant it for publication by the newspapers to warn her co-conspirators that their plans had been discovered, and that the crown was aware that they had been amassing arms. On September 15, however, Pérez rode first to San Miguel, where there was another conspiracy to promote independence, and then to Dolores, where he delivered the news to Father Miguel Hidalgo, who was located in the town of Dolores (now known as Dolores Hidalgo and the “Cradle of National Independence”), about 70 miles (112 km) north of Querétaro.

Father Hidalgo decided to expedite the insurrection, and issued the Grito de Dolores (the Cry of Dolores) for the revolution to begin at dawn on September 16, 1810. Thus, the long, painful, and bloody process of the emancipation of Mexico began; it would not be achieved until 1821.

She was not so lucky and was transferred to Mexico City in 1814, to be incarcerated in the convent of Santa Teresa. Despite the efforts of her husband, who served as her defense lawyer, she was convicted of treason, and in 1814 was sent to the convent of Santa Catalina de Sena, considered stricter than Santa Clara. The financial situation of the large Domínguez family was dire during those years, since Miguel Domínguez, seriously ill, had no income to support their many children. Spousal visits were also rare. Finally, Spanish Viceroy Juan Ruiz de Apodaca recognized the services of Don Domínguez and restored his salary and released Josefa in June of 1817, after seven long years of imprisonment.

She was principled throughout her entire life. In 1822, just one year following independence, Agustín de Iturbide proclaimed himself emperor of Mexico and Josefa was invited to appear in the court as a maid of honor for his wife, Ana Duarte de Iturbide. She emphatically declined the invitation as intolerable mockery, since the concept of an empire was totally contrary to the ideals for which she had fought. Josefa Ortiz de Domínguez shunned fame and recognition, believing she had done nothing more than fulfill her responsibilities.