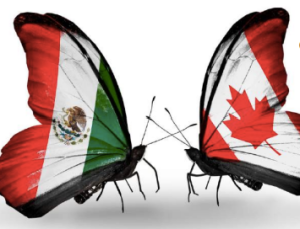 It’s been almost five years since the Government of Canada imposed a visa requirement on Mexicans wishing to visit the country for either business or pleasure. Despite opening more visa application centers and providing for a more streamlined turnaround process, criticism persists. Every year, the country continues to lose hundreds of millions of dollars in travel, tourism and related revenue. Its reputation abroad, especially in Mexico, suffers as well.

This opinion is based upon having reviewed Citizenship and Immigration Canada’s own evaluation report, a Whitepaper by the National Roundtable on Travel and Tourism, and a University of Calgary study, all published in 2012; and an article written for http://www.panamericanworld.com, in December 2013. In July, 2015, Toronto hosts the Pan Am / Parapan Am Games. Without relaxing the current legislation or at minimum the implementation regulations, it is suggested that revenue projections for The Games will not be realized. The buzz could very well be more about Canada’s policy towards Mexico and tourism than The Games themselves.

Under the Immigration and Refugee Protection Act, every foreign national travelling to Canada must obtain a temporary resident visa before arriving, apart from where an exception is granted to citizens of selected countries. Mexico had been one such nation. Then on July 13, 2009, a visa requirement was announced for visitors arriving from Mexico. It was based on concerns over abuse of the refugee claims process resulting from a Canadian system which needed fixing.

Immediately after announcing the change, highest government officials assured Mexico that the problem was with a fragile and ineffective Canadian immigration asylum claim procedure, and not Mexicans. The explanation was in response to a shocked and offended Mexican government and public, especially in the absence of advance notice or formal consultation.

True, the institution of the visa requirement for Mexican nationals was effective at reducing the number of asylum claims from an all-time high of 9,527 in 2008, to 1,221 in 2010. But at what cost?

While large tourism source countries like the UK, France, Germany and Australia exempt a visa requirement for Mexicans, Canada does not. It has been stated that emerging markets like Brazil, China, India and Mexico are the “power players of the future,” and that accordingly, visas and visa processes are becoming much more important as a determinant of destination competitiveness. It has been estimated that Mexico is slated to increase its long haul outbound travel by 65% in the decade ending 2020.

So where are Mexicans likely to vacation; Canada, or Australia and European destinations? In 2010, Canada conducted an internally led comparison study of visa application processes and requirements, between Canada and other source countries competing for tourism. The study concluded that Canada collected more information than other countries reviewed (the US, the UK, France and Australia) and had the highest number of information fields on its form required to be completed by applicants. Furthermore it found that the information requested varied between different Canadian visa offices, suggesting inconsistency, or at worst the possibility of significant inappropriate subjectivity factoring into the decision to accept or reject a visa application. To be fair, Canada asked a similar number of security questions as other countries and requested a similar number of supporting documents.

The same study acknowledged that the number of Mexican travelers to Canada dropped considerably since the removal of the visa exemption, no surprise. What is perhaps more significant is the broader implication; in general when a visa exemption is removed, the bilateral relationship and politics between the two countries is negatively impacted.

Finally, the study included an interview process regarding the Mexico visa requirement. Interviewees noted that the removal of the visa exemption created a negative impact on the travel of bona fide visitors to Canada, and negative feelings towards Canada.   It has been suggested that the current visa structure acts as an obstacle to trade, preventing tourism from fully achieving its potential to generate significantly greater export revenue and jobs for Canada.

Statistics Canada has published figures indicating potential lost tourism revenue of $340 million because of the Mexican visa requirement. That number has been critically evaluated in light of the cost saving of not having to pay for bogus refugee claims (figures vary depending on the parameters of the study used, but they tend to mirror the savings). However, given the foregoing impact on export revenue and jobs, the true adverse economic impact for Canada cannot be accurately measured. Nevertheless, a study by Deloitte using Statistics Canada data does suggest that a 1% increase in visitors to Canada would generate an increase of $817 million in Canadian exports, given the strong link between inbound Canadian tourism and Canadian exports.

“Rather than focus on drug enforcement or fix a dysfunctional refugee claim process, Canada chose visas. It’s the easy way out. It’s also the costly way for everybody, except the bureaucrats who are paid to push paper.”

Those same bureaucrats will no doubt laud the success of the 2015 Pan Am / Parapan Am Games, regardless of the ultimate outcome. But the loss of potential long-term revenue for Canada as a consequence of the Mexican visa requirement will likely not receive the attention it deserves.