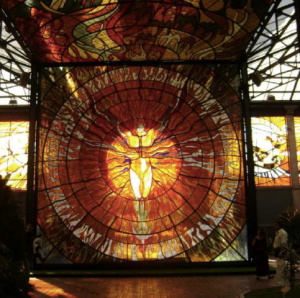 With its unique ability to manipulate light stained glass has an “ah inspiring” quality which made it popular for decorating churches over many centuries. It fell out of favor during the Reformation, when churches across Europe were stripped of their ornamental attributes, and did not regain its popularity until the late 19th century during the “Arts and Crafts” movement.

This movement was inspired as a counterpoint to the mass production which occurred during the Industrial Revolution and attempted to restore handcrafted quality and design. It began in Britain with artists such as William Morris but gained momentum in Europe and throughout North America. As the art of stained glass became an important element within this genre, the craft experienced resurgence around the world.

Louis Comfort Tiffany, the son of the famous New York jeweler, was part of this movement. He opened a foundry of glassworks, experimenting with various elements to develop exceptional color gradations and different textural effects. His foundry was particularly effective in conveying the rippled effect of water or clouds allowing him to produce high quality glass landscapes. Possibly best remembered for his Tiffany lamps he also specialized in spectacular glass murals.

In 1911 Tiffany was commissioned by the Diaz government to produce a stained glass curtain for the theatre in “El Palacio de Bellas Artes” in Mexico City. This unique piece of art is the only one like it of any kind in any opera house in the world. The folding panels, which include an iron framework and nearly a million pieces of iridescent colored glass, weigh 24 tons. The design, inspired by the Mexican painter Gerardo Murillo, features two volcanoes and the valley surrounding Mexico City. It is worth attending a concert at the Bellas Artes just to see this sensational Art Nouveau mural.

An equally impressive but completely different example of stained glass is located in Toluca. The “Cosmovitral” is the brainchild of Leopoldo Flores, a prolific Mexican muralist. When an outdated market in Toluca was about to be demolished, Flores campaigned to save it.

This visionary artist saw enormous stained glass murals encircling the entire building and running across the ceiling. Within the structure he proposed a botanical garden.

The original windows were replaced by large glass murals; 48 panels cover an area of 3,200 square meters. The project contains about 75 tons of metal substructure, 45 tons of blown glass and 25 tons of lead solder. In 1980 the building was inaugurated although the ceiling was not completed until 1990. With its opposing themes of day and night, woman and man, good and evil, this is a superb example of “Modern Mexican Muralism” in transparent form. In 2007 the “Cosmovitral” was named one of thirteen wonders of Mexico and in 2008 it received the Excelsis prize from the Global Quality Foundation. Toluca is not far from Mexico City and this alone is worth a day trip.

On a smaller scale, the warm quality of light in Mexico makes stained glass an excellent medium to adorn private residences. Its very element of lightness provides a strong contrast to solid cement construction. Unlike more traditional art forms, it is not affected by the heat and humidity and several homes in this region have chosen to include the decorative element Dom Canini has his studio in Tuxtla Gutierrez but is willing to visit your home to do the preliminary assessment and return for the installation. He is a Canadian who learned the art of stained glass in Italy. He began his craft as a hobby and has been working in this medium for 20 years.

Dom loves working with glass because of the combination between color and transparency. This past summer he found himself employed by a well known glass studio working in Elora, Ontario, Canada, where he was restoring several windows in a variety of heritage buildings and churches. Earlier this year Dom did a window for our villa illustrating a coral reef and tropical fish, swimming in a shimmering blue ocean. I could not be more pleased with the results!

On a recent trip to Oaxaca City, while staying at the B&B “Casa de Mis Recuerdos”, I saw some nice examples of stained glass and asked who had done them. The company “Innovavidrio” was founded by Angel Muñoz Rodriguez 30 years ago and he has passed his skills onto his children. They are willing to travel around the state to accommodate clients needs. In Spanish you would be looking for “Vitrales Emplomados” (leaded glass).

Palacio de Bellas Artes Is located west of the Zócalo, on Avenida Juárez,

The main theatre is an important venue for classical music, opera and dance; the curtain can be seen by attending a concert or by joining a tour of the building. The building is open 10:30am-6:30pm Tues-Sun but these tours are only on Tues & Thurs at 1& 1:30 PM, limited to 40 people so come early.