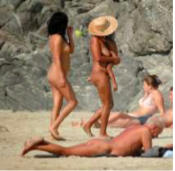 “Naturism is a way of life in harmony with nature, characterized by the practice of communal nudity with the intention of encouraging self-respect, respect for others, and for the environment.” International Naturist Federation

Zipolite, which is located about one hour up the coast from Huatulco, is the only beach in Mexico that welcomes nudism on theiriconicbeach. OnJanuary28- 30, 2016, Zipolite hosted the 6th annual Latin American Encounter of Naturism (ELAN VI). The conference was expected to attract nearly 250 – 300 nudists. People of all shapes, sizes, and cultures attend this event NOT with the intent to foster nudism but to encourage the acceptance of nudity and to not be seen as perverse. In2007,BrazilandArgentinatookthefirststepsin creating the ELAN. The goal was to establish harmony among nudists and be able to gather in a diverse society. Mexico was nominated to hold the event.

This year I went to Zipolite on the first day of the conference. I have visited this stunningly beautiful beach many times so it’s not strange to see naked people. There were more nudists than usual, and as always, the beach had a peaceful and relaxing atmosphere. It was a very low-key day – the only challenge being the occasional nudist bending over in front of you to pick up seashells. This is not something you want to see, so turning to look out at the ocean was the scenery of choice. I strolled down the beach and checked out the “Hotel Nude” where I heard many nudists were “hanging out”. Mostly everyone was unclothed while I was way overdressed (bathing suit and cover- up). There, I was able to pick up a schedule.

The 3-day event begins with the Calenda, a traditional Oaxacan celebration to welcome visitors, promote happiness, and strengthen family and friendships. It is an important and deeprooted tradition of a celebration of life. Afterwards there are photos taken, a toast and a ceremony or Fiesta de Inauguración. Some of the activities that took place at the Hotel Nude, Shambhala Vision, Los Angeles Hotel Ranchos Los Mangos, and of course the beachfront, included family awareness, such as confidence exercises, a game of how to save water and a conference on social and family nudism taught by Juan Marcos Castañeda, president of the Federación Nudista de México (FNM). The days continued with yoga, hiking, volleyball, football, dancing, karaoke, a body painting contest and more. Last but not least the convention concludes with fireworks. However, one day of nakedness was sufficient for me and as the saying goes, “You’ve seen one, you’ve seen them all.” So I finished my day on this amazing and one-of-a-kind beach, at El Colibri, a barand hostel owned by Kevin Kelly. The Kelly family did not participate because, as Mike Kelly put it well, “I don’t have anything to wear.”

Zipolite is seeking to become a global destination for nudism. The Federación Nudista de México was established in December 2011 and so far has 50 members. ELAN and FNM hope the conference can be repeated in upcoming years with the goal of eliminating the prejudice that nudity is linked to sexual contact, and the hope that someday the residents of Zipolite can live—and make a living—in the nude.