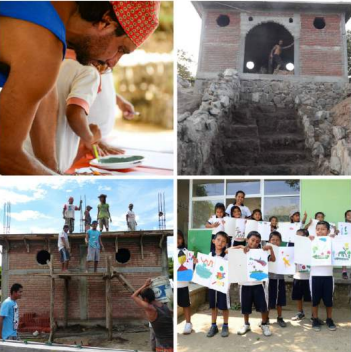 Bumping along the narrow country road twelve kilometers from the all-inclusive beach resorts of Bahias de Hualtuco, you wouldn’t expect to end up in one of the most idyllic places in the state of Oaxaca. A few cows graze in roadside pastures, and you’ll pass a banana plantation and acres of tended trees in a reforestation project. A grove of palms will be harvested for palapas and another patch of palms, heavy with coconuts, provide coco milk and sweet coco meat. Here and there splashes of graffiti brighten rocky cliffs.

A hand painted arrow at a fork in the road points to Chalo’s Restaurant where you’ll find Chalo, patriach of the third family to settle in this remote bay, population 450. Except for a three-year stint in Chicago, he’s spent his thirty-two years here, fishing, guiding would-be-fisherman and serving catch-of-the day to tourists.

The beach is pretty much deserted except once or twice a day when party boats pull in and several dozen vacationers, clamoring for cold drinks, fresh fish and spicy Mexican specialties, flock to the fifty or so palapa restaurants along the white, sandy beach.

Sitting at a shaded table in his restaurant, Chalo, father of two children ages eight and twelve, talks about life in their village, which is isolated without telephone, Internet, films or books. “There isn’t much for the children to do,” he says. “At least nothing cultural.”

To provide more stimulation for children in San Agustin, Chalo started an environmental club for the youth of the area. “It was sort of a summer camp,” he explains. A few kids from neighboring small villages scattered among the coves and inlets joined in, but he admits there’s no sense of community along these beaches, just patches of neighborhoods here and there. However, that is about to change, Chalo hopes.

The idea of a library/community center took root four years ago during chats with his friend, Jesús González Gutiérrez. While vacationing on Oaxaca’s Pacific coast, Jesús met Chalo, and they have remained friends for fifteen years. One evening after a game of backyard football, they decided to build a center where the idle children of San Agustin could enjoy and participate in cultural activities. The deal was closed with a handshake, and Jesús returned to his home in Oaxaca City. Chalo began discussing the plan with authorities in Huatulco. He received permission and a piece of scrubby land on which to build La Biblioteca Del Mar (Library of the Sea).

In Oaxaca City Jesús teaches workshops and conducts classes in sustainable building design. Although he’s not an architect, he has studied architecture and is especially skilled in working with materials available locally, such as plastic bottles, tin cans, and almost any material that would otherwise end up in landfills. Internationally known for his fresco restoration projects, Jesús travels throughout the world teaching the art of fresco painting.

In keeping with his penchant for sustainable construction, Jesús used local materials, such as stone and bricks (made by a brick maker from a bank of nearby clay). He designed a dry toilet. Solar panels were installed for lighting.

“The challenge in San Agustin,” Jesús explains, “was to build a secure building that can withstand heavy rain storms and even the occasional hurricane.” So taking a cue from the Aztecs and Mayans, he installed a foundation of stone. The stairs leading from the sandy street up the hillside to the library are also of stone–reminiscent of steps of ancient pyramids.

The expansive beach of San Agustin edges the 29,000 acre Santa Maria Huatulco National Park, where more than 200 species of fauna, 700 different birds, at least 9,000 varieties of plants and all kinds of reptiles have been identified and are protected by law. Dolphins and whales play off shore. Turtles and fish abound. Within the national park are coral reefs and areas of mangroves.

Is it any wonder, given this idyllic setting, that Jesús was able to recruit crews of foreign volunteers to help build the two-story library/community center? They came from twenty countries and worked alongside local townsfolk, such as masons, construction workers and landscapers. The volunteers worked from 6:30 a.m. until about 11:30 then stopped to rest, swim eat, read, or paint until the cooler hours of 4:30 to 7:30. Local families hosted the volunteer workers, giving them lodging and meals.

“At first local residents, not accustomed to foreigners living here, were shy,” Chalo recalls. “But they soon got used to them and they all worked together.”

During construction of La Biblioteca del Mar, Chalo and Jesús conducted workshops in art, music, dance and environment sciences, usurping a table or two in the bayside palapas. Also, more than a hundred artists from around the world have stopped by to share their skills and talents.

Today, there is a permanent building for such activities. Shelves on the first floor are already stocked with 3,000 donated books in 12 different languages, and La Biblioteca del Mar has been accepted into the web of libraries in Mexico City and Oaxaca. The open-air second floor provides additional space for cultural gatherings, back-dropped by panoramic views of the ocean and countryside. There’s ample space for lectures, films and story telling.

Women in the village have been trained in day-to-day operations of the library and center. “It’s their building,” notes Jesús. “They feel a sense of proprietorship and responsibility. It’s about community building.” He appreciates all the donations of building materials, books and art supplies. Of course more are welcome.

Chalo and Jesús know there will be challenges in putting this concept of community into action. However, it has started and is no longer just a dream.

Geri Anderson has published a memoir, “OH OAXACA, Living, Laughing, Learning in Mexico.” She can be reached by email: geriande@yahoo.com.