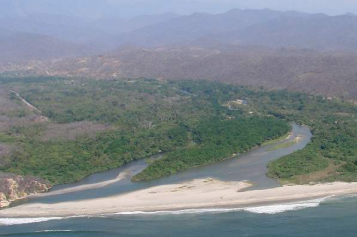 This column addresses three not so disparate subjects, the ecology and current status of the Copalita River, general problems with rivers in Mexico, and status of river restoration projects in the country.

The Copaltia River watershed, whose outlet is located approximately 10 km to the east of Huatulco, has a sort of dumbbell shape, large in the upper watershed but narrowing as its exit at La Bocana. The upper watershed is dominated by pine-oak woodlands, followed by the humid forest at mid-elevation, caducifolius forest (trees and shrubs drop their leaves in the winter) closer to the coast, and finally coastal species including mangroves, which tolerate brackish water. The watershed contains plant species endemic to the region and a variety of species in danger of extinction including the river otter, jaguar, ocelot, and tigrillo. The lower watershed supports a fresh water crayfish know as chacal, and a smaller freshwater shrimp.

Major threats, especially to the lower watershed in the vicinity of the village of Copalita, are increased demand for drinking water and associated over-exploitation of groundwater, contamination (including intentional poisoning to bring native freshwater shrimp to the surface for easier harvest), and dredging of sand and gravel for construction in Huatulco. The concern over management of groundwater is paramount especially with the increasing demand in the tourist destination of Huatulco and plans by Fonatur (El Fondo Nacional de Fomento al Turismo) for new resorts and hotels.

Three sand and gravel contractors are dredging the river between the village and the northern boundary of the Parque Eco-Arqueológico; according to the local spokesperson for the the Comité Pro Defensa y Uso Sustentable del Río Copalita, without permits or environmental oversight by government agencies such as PROFEPA (Federal Attorney for Environmental Protection) and SEMARNAT (Secretariat for the Environment and Natural Resources). These operations are wreaking havoc on the ecosystem, destroying fisheries, lowering the water table, and causing severe erosion.

The Committee has initiated a program of reforestation, with an accompanying nursery and emphasis on floodplain restoration using native trees, some in danger of extinction, including the lovely guayacán (Guaiacum officinale), caoba, (Swietenia humilis) and three species of maquil (Tabebuia spp.) They apparently will have a native plant booth for sales to the public at the bimonthly Organic Market in Santa Cruz. The Committee has received financial support through both CONAGUA (National Commission on Water) and the World Wildlife Fund for materials for the nursery as well as support to file the paperwork to become an organization recognized by the government. Typically they have work parties organized on Sundays, which include planting, garbage removal, and seed collection.

The real issue for the Rio Copalita is the overexploitation of building materials, which is expected to continue as long as there is a demand, and the river provides an easily accessible and profitable source for crushed rock material.

As the river drops, it becomes more isolated from the floodplain and newly exposed over-steepened and vertical banks are highly vulnerable to erosion, exacerbating the problem and contributing to decline in water quality. Although the banks can be stabilized, there is no point to doing this work until the disturbance stops. Once the river is trapped and can no longer flood, essential processes are halted. Raising the bed of the river to restore these processes is extremely expensive and complicated. So the lesson here and elsewhere, is to limit disturbance, and determine how much material will be needed in the long term (planning). It is always harder and more expensive to fix these types of problems, rather than prevent them.

A search for restoration projects in Mexico yielded zero results. Instead I read several reports about river contamination and over-exploitation. One involved the Atoyac River in Veracruz. CONAGUA determined that a cavern beneath the bed of the Atoyac River collapsed due to erosion, leaving a 20 by 30-meter hole into which the water flowed. By early March this had resulted in a dry riverbed downstream and eight municipalities and 10,000 people without their principal source of water. Their solution was to plug the hole; the status of this project is unknown.

On a local level, I am happy to report that the rivers I have observed such as the Zimatan, and even the creek above the Zanate lagoon in Cacaluta, appear to be healthy, especially in the upper watersheds. I have also walked upstream of several of the concrete flood control canals in town, to find lovely ephemeral channels. A really challenging project, both politically and technically, would be to restore these channels to a more environmentally friendly and attractive condition.