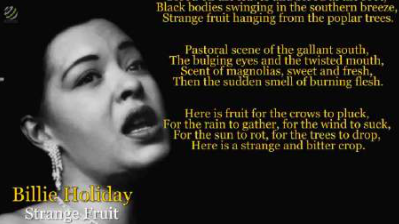 Take a quick look at the political unrest in nearly every corner of the world today, flipping through scenes of bombings, riots, protests and war-torn countries, you’ll see horrifying images and people holding signs calling for social justice.

But take those same scenes from around the globe and listen, instead of look, and you’ll likely hear something incredibly powerful and universally remarkable hidden in the background – lyrics.

Songs of protest are being written, composed and performed by artists from diverse nationalities, in different languages, and in many distinct musical genres. From rap to country to pop, music has become a form of political activism, and a way to both speak out against the establishment and unite people in a common cause.

Art has always served as a refuge and uniting force during turbulent times. Music is art. From its very inception, music was created to bond people together. And in modern times, it has become a very powerful tool in the cry for egalitarianism.

The protest song is certainly not a modern-day creation. Politically charged music has been played for centuries in all parts of the world. Even Beethoven’s Ninth (Ode to Joy) is said to have been written as a call for political reform.

Even in countries and regions of the world where “free speech” is not permitted, protest music finds a way. Musicians played key roles in social uprisings in countries like Egypt and Tunisia and, more recently, in Venezuela. However, knowing the power of music to unite and incite, even United States officials banned Billie Holliday’s song Strange Fruit from the radio in 1939 due to its descriptive telling of black lynchings in the southern states.

In 2014, here in Mexico, when 43 students from Ayotzinapa went missing, the music community responded with dozens of songs dedicated to the injustice, many of which “called out” the government’s handling of the crime and blatantly pointed out the misconduct and corruption surrounding the murders.

Protest songs have long been an artistic way to rally people to a social cause and pierce the veil of the status quo. They have been with us through times of war, women’s suffrage, civil rights, unwarranted legal actions, and unjust discrimination. Arguably, the protest song is a tool used largely by what is deemed the “left” or anti-establishment movement. But music itself has no agenda, so, in the hands of the establishment, it has also been used to compose political propaganda intended to “re-educate” and control populations.

Historical music can help us make sense of an era we did not experience ourselves; listening to music from other countries and cultures today can help us better understand the struggles of its people. Even if you do not understand the lyrics, the emotion can be felt and understood.

Today’s global airwaves are filled with lyrics that demand social change. And those lyrics can be heard in Arabic, English, Spanish, Russian, Lebanese, Congolese and many, many more languages, each song encouraging the listener to take a stand.

In his book Rhythm and Resistance, Ray Pratt notes that “No music alone can organize one’s ability to invest affectively in the world, [but] one can note powerful contributions of music to temporary emotional states.” Emotion is what makes protest songs so powerful and effective.

Songs such as these unite us in an emotional state, for better or for worse. What we as individuals choose to do with that emotion is up to us, but there is no denying that for centuries, music has played a powerful role in shaping our lives and our political views, and will continue to do so for centuries to come.