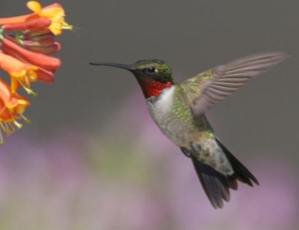 Huatulco welcomes a wide variety of tourists year-round. In winter, Canadians and Americans come to evade the cold. Summer sees more Europeans, along with Mexican nationals, and people from South and Central America. Many are merely passing through for a week or two, while others stay for the season. And then there are people like us – we love it here so much that we never leave.

Like humans, migrating birds also appreciate the semitropical climate of Huatulco. And similar to humans who stop here, there are four types of migratory birds: winter residents, summer residents, passers-through, and migrants who join the resident populations.

Just as many readers of The Eye fly into Huatulco to avoid the freezing temperatures up north, so do some of our feathered friends. The difference is that they do it under their own steam. The Ruby Throated Hummingbird and the Painted Bunting are two examples of birds that come from the north and stay for the winter. They are joined a little later by various species of ducks, who take their time getting here, preferring Huatulco in March and April.

The Blue Grey Gnatcatcher and the Yellow Breasted Chat are good examples of summer residents. They can be found here in July and August.

The Laughing Gull passes through only briefly. They only vacation in Huatulco for a week or two during their journey from as far away as Canada en route to South America and again in the reverse. Certain species of Sandpipers also stop by for a brief rest.

After the Orchard and Baltimore Orioles migrated here from points north, many of them decided to stay. Recently I have noticed a few Northern Cardinals who had the same idea. Like my husband and me, these migrants are now part of the resident populations.

I am not an avid birder, but who wouldn’t derive pleasure from watching the antics of these colorful little beasts? And there’s a lot to see – 291 species of birds either live in or pass through Huatulco. With almost 210 square kilometers of virgin forest, the Huatulco National Park provides a wonderful sanctuary. It is a perfect place for our transient friends to rest and fatten up before their next long trek. The Eco-Archaeological Park is another favorite spot. Both sanctuaries offer a variety of eco-systems for the wide range of visitors flying in.

It is not even necessary to visit the parks to see birds – they are everywhere. Serious birders, who were guests at our B&B, have added to their lifelong list while sitting on their terraza, and by walking in the neighborhood. I love that Huatulco hosts such a vast variety of visitors all year round…with or without feathers.