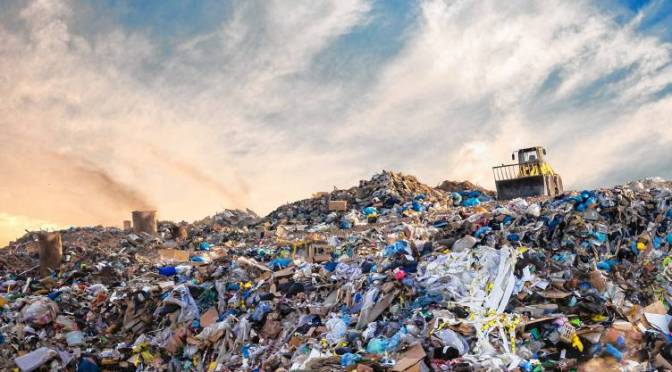 My father-in-law was one of those people who liked garbage dumps for the treasures they held. There is a family photo of him in a suit, checking things out at a dump while on his way to his daughter’s wedding. Garbage dumps have changed somewhat over the years, but I’m sure there is still a lot of good stuff that ends up in a landfill.

There are mountains of stuff going to landfills every day. Mexico, according to Wikipedia, sends 95% of its waste to landfills. For Canada, it’s 72% and the US 54%. Too much, way too much, as we all know – but is there anything good about piles of garbage besides the odd treasure? Well, there is Garbology and Archeology, or what we can learn about ourselves and our society from studying garbage.

A. J. Weberman has been credited with the invention of the term “Garbology.” Weberman billed himself as the world’s leading Dylanologist (also his invented term). In his intense study of Bob Dylan and his music, Weberman collected and studied Dylan’s garbage and labeled the study Garbology. He claimed Dylan’s garbage revealed real insights into Dylan as a human being, an artist, and a family man. Weberman goes so far as to claim his work led to Dylan’s Nobel Prize for Literature. However, knowing that Bob Dylan once beat up Weberman on the streets of New York, I’m not sure that Dylan sees Weberman as being that influential.

Weberman, an odd eccentric even to this day, was onto something; You can learn a lot about someone from their garbage. The term Garbology has since been taken up by a Harvard-trained anthropologist, William Rathje (1945-2012). Rathje’s work led to Rubbish! The Archaeology of Garbage (Harper Collins 2001), co-authored with Cullen Murphy. The book is based on Rathje’s ongoing Garbage Project with the University of Arizona.

Rathje saw the Garbage Project as a combined study of archeology and sociology. A 1992 New York Times review of the book was aptly titled “We are what we throw away.” The review essentially expresses what Weberman said about going through Bob Dylan’s trash. One example cited in Rathje’s book was that of alcohol consumption. Rathje found that people drank 40% – 60% more alcohol than they reported they consumed. Among numerous other findings, Rathje found that people from poorer neighbourhoods more often choose smaller portions of name brand merchandise rather than larger quantities of the less expensive no-name or generic brands.

Rathje’s garbage project has also done some myth-busting about what is actually in landfills – substantially more recyclable paper than fast food containers, for example. His study also found that landfills are dry and oxygen-starved places that tend to mummify rather than biodegrade material. One way Rathje’s team dated material in landfills was simply to read the perfectly preserved newspapers buried at the level they were studying. To this day, the Garbage Project studies landfills across the US (in Toronto and Mexico City as well) going back to trash levels from the 1950’s. Even trash layers from past decades show that organic material is only partially biodegraded.

Archeologists and anthropologists go farther back in time in their study of trash sites. In these disciplines, trash sites are called “middens” (the word comes from the ancient Danish for “dung heap”). Midden later became the scientific word used for a kitchen mound or shell heap. Middens are the cornerstones of how archeologists and anthropologists piece together their knowledge of ancient peoples.

As an example, at Yucu Dzaa, a late postclassic (ca. 12th to early 16th centuries) Mixtec capital on the coast of Oaxaca, excavations of middens revealed numerous aspects of cultural life including levels of prosperity between households – indicating socio economic classes. Materials from other parts of Mexico indicate distant trading. Non self-sufficiency in food preparation indicates existence of local markets for goods.

Worldwide, ancient trash heaps have been central in our understanding of our history. The East Chisenbury midden, for example, provided information on the transition between the Bronze and Iron ages in England. Ancient middens in Japan have demonstrated evidence of extensive trade networks. In Egypt, at a place called Oxyrhynchus, a substantial midden contained large quantities of papyrus texts. This site held so much important information that scholars have commented that this midden would have been comparable to finding the ancient library of Alexandria. Among the many texts excavated at Oxyrhynchus was the gospel of St Thomas, discovered in 1945.

One thing they don’t tell you at the dealership when you buy a pickup truck, is that you will be hauling something to the dump (just as surely as you will be moving someone’s couch with it). As a truck owner, I’ve learned that modern landfills are dramatic places to visit. There are swirling flocks of crying gulls or, as in Huatulco, charging troupes of zopilotes (vultures). Monster machines roam at high speeds with huge iron wheels crushing everything in their wake. There is a tapestry of colors from all manner of things discarded. And there’s that acrid smell. It’s that smell and the rush of the crushing machines, I think, that seems to evoke haste among us trash deliverers. I’ve always felt in a rush to empty out the back of the truck as quickly as possible, jump in the cab, and speed off – thus leaving behind some of the evidence of our lives for garbologists or archeologists to study one day – no time to look for treasures, as my father-in-law would have done.