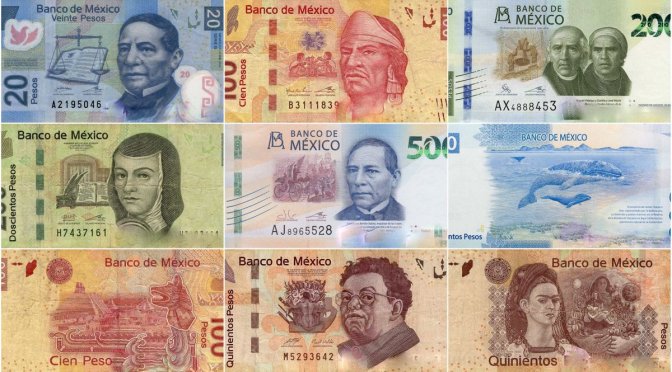 In this part of southern Mexico, paper money – all issued by the central Banco de México – is colloquially known as lana, billete(s) or biyuyo. Change in coins is called moneda throughout Mexico, and locally you might hear chincastle and morraya.

I had often wondered about the historical figures portrayed on Mexican paper currency and their significance, as well as the landscapes and images on the opposite side of various denominations. Typically, one side commemorates an aspect of Mexican culture and prominent historical figures, with landscapes and flora and fauna featured on the reverse side. Mexican paper money is indeed artistic, colorful, beautiful, and instructive, so I’ve written about this in The Eye before (March 2019). But it’s been changed again, so here’s an update!

This past November (2021) a new 1,000-peso bill was issued, although it is not widely circulated. Unlike its predecessors, it is printed on a plastic polymer. Honoring the Mexican Revolution on one side in multi -hues of teal and yellow are portraits of Francisco I. Madero, Carmen Serdán and Hermila Galindo in the foreground, while a steam locomotive, the modern transportation of the day, provides the background.

Madero was Mexico’s 37th president (1911-13) and a prominent leader in the history of the Mexican Revolution (1910-20). He pushed for the ouster of Porfirio Díaz, the self-declared President for Life who had ruled off and on from 1876 to 1911. Although well-educated and from a wealthy family, Madero advocated for the social reforms that fomented the Revolution. He was assassinated during a right-wing military coup.

María del Carmen Serdán Alatriste took on organizing the logistics of Madero’s anti-reelection movement in the state of Puebla. She maintained and protected the family household in the city of Puebla, where the first armed battle of the revolution took place. Carmen and her sister had smuggled guns in their clothing into their house to support the anti-reelection battle, set for November 20; supporters of Porfirio Díaz discovered the conspiracy on November 18 and attacked the house. You can visit the ensuing bullet holes in what is now Museo Regional de la Revolución Mexicana, Casa de los Hermanos Serdán. at 6 Oriente 6 in the historical center of Puebla.

Hermila Galindo Acosta was a well-educated and outspoken feminist and advocate for women’s rights. She was a supporter of Venustiano Carranza and became his personal Secretary, among other titles and responsibilities. Carranza, after a complicated series of power plays and internal dissent, became President for three years after the assassination of Madero. He supported Galina and helped her efforts, including the 1915-16 publication of the review La Mujer Moderna (The Modern Woman).

The reverse side features the tropical wetland ecosystem of the Calakmul Reserve in the State of Campeche, Mayan ruins, and the endemic jaguar.

The new pink and green 20-peso bill (which was supposed to be replaced by coins) was released on September 24, 2021, and on the horizontal side depicts the “Solemn and peaceful entry of the Army of the Three Guarantees to Mexico City on September 27 of the memorable year of 1821 and Consummation of the Independence of Mexico’ (the original artist is unknown). Also called the Ejérciito Trigarante, this newly formed unified (albeit briefly) army comprised Spanish troops led by Agustín de Iturbide and Mexican insurgent troops led by Vicente Guerrero. (Guerrero later became Mexico’s second president – for less than a year; he was betrayed and brought to Bahía de Entrega, one of the beautiful bays of Huatulco, then transported to Oaxaca City where he was executed.)

The opposite, vertical side celebrates Mexican coastal mangrove ecosystems, the Mexican crocodile, and the roseate spoonbill, portrayed at the Sian Ka’an Biosphere wetland preserve in the Yucatán state of Quintana Roo (mangroves, crocodiles and roseate spoonbills also inhabit the Pacific coast).

Issued on October 28. 2021, the beautiful new 50-peso bill was printed on a polymer instead of paper and is predominantly mauve-purple in color. It is very complex, in part to eliminate counterfeiting. The images are vertically oriented on both sides of the bill; security features include areas on the bill that feel different to the touch, and areas that change color when you tilt the bill.

The bill was designed to honor both Mexico’s pre-Hispanic history and its diverse natural history.

On the mainly historical side, the primary motif in the foreground shows an eagle perched on a prickly-pear cactus holding the atl-tlachinolli (the Aztec symbol for “water-fire,” representing war as sacred; this motif is a bas-relief carving on the back of the monolith called El Teocalli de la Guerra Sagrada (the Temple – teocalli is Nahuatl for “temple” – of the Sacred War). The monolith was discovered in 1831 in the foundations of what is now the National Palace of Mexico in Mexico City, which was originally built with the remains of preceding Aztec architecture. The temple/throne has been moved to the National Museum of Anthropology in Chapultepec Park.

The monolith is a scale model of an Aztec temple, and could have been created as early as 1200; however, it is also thought to have been commissioned as a throne by Moctezuma II, the Aztec ruler defeated in the conquest, which would put its origins in the early 1500s. Archeologist Alfonso Corso, in a journal article from 1927, gave the piece its name, and hypothesized that the depiction of the eagle “justified human sacrifice and warranted warfare” as a way to collect prisoners for sacrifice.

In the background of the eagle depiction, a representation of the city of Tenochtitlán appears. The eagle depiction bears a striking resemblance to the national coat of arms that appears on the Mexican flag, except the “water-fire-war” object has been replaced by a snake. While no one quite knows why, some historians suggest that Spanish efforts to remove indigenous symbols led to the eagle capturing the snake. the city of Tenochtitlán appears; it is based on a portion of the 1945 mural by Diego Rivera, The Great City of Tenochtitlán, in the National Palace. The top of the bill shows the symbol for ollin (Nahuatl for “movement” – this ollin may represent the four movements of the annual course of the sun); there is a small “50” atop the symbol, as well as in each corner of the bill.

Although the Rivera mural shows some natural heritage – Mexico’s famous twin volcanoes, Popocatépetl and Iztaccihuatl, the central image on the reverse of the bill is the Mexican axolotl, an endemic salamander endangered due to loss of habitat, urban encroachment, pollution, and predation. The remaining axolotls are now confined to Lago Xochimilco, the remnant “lake” of the former basin of México and the name given to the southern Mexico City neighborhood where Aztec canals connected the neighborhoods of Tenochtitlán and provided access to chinampas, artificial agricultural plots for growing produce and flowers.

Not to be confused with other salamander species in this genus, often dubbed “axolotls” as well, the scientific name of this particular axolotl is Ambystoma mexicanum. Named after the Aztec god of fire and lightning, Xolotl, the axolotl, aka ajolote in Spanish, has been important in Mexican culture for centuries. It was important in the diet of pre-Hispanic residents of the city of Tenochtitlan and especially the Xochimiltecos (No thanks! But they still turn up in real tamales, check the February 2022 issue of The Eye).

Although native to the system of lakes that comprised the basin, axolotls were particularly prevalent in the Chalco-Xochimilco sub-basin, because it was less brackish than the other three basins. This huge, up-to-a-foot-long salamander is unusual in that its final metamorphic stage is not completed, and its gills remain outside its body. It is sexually mature in the larval stage. Even more unusual is its ability to regenerate limbs, hearts, spinal cords, and even part of their brains, so this odd-looking animal holds huge medical and scientific significance.

On the 50-peso bill, the ajolote is surrounded by chinampas, where corn – perhaps Mexico’s most resonant cultural symbol – is shown being cultivated. The trees shown growing on the edges of the chinampas are ahuejote trees (Salix bonplandiana), an erect willow resembling a poplar. (Ahuejote comes from the Nahuatl words atl, or “water” and huexotl, or “willow.”)

A new 100-peso bill was issued on November 12, 2020. The bill is slightly larger than the new 20-peso bill. What a concept! Different sizes for different denominations. The images are vertically oriented on both sides, with hues dominated by pink and turquoise. Doña Inés de Asbaje y Ramírez de Santillana, better known as Sor Juana, a scholar, philosopher, and poet, is represented on one side. Born in 1648 on what is now the outskirts of Mexico City, she was raised by her wealthy criolla (Spanish, but born in Mexico) mother. Her intelligence and insatiable curiosity were recognized at a very young age, and she self-educated herself in the family library. Even girls of her economic stature and recognized capabilities were denied any formal education, typical for the era. Sor translates as “nun”, which she became in order to escape the confines and expectations of marriage, and to continue her studies and writings. She was considered a “proto feminist,” arguing for women’s education, and she risked being censured by the church for her outspokenness. For a more thorough description of this incredibly progressive woman, please see The Eye, “The Tenth Muse,” September 2013.

The temperate forests of the states of México and Michoacán de Ocampo, home to the Monarch Butterfly reserve, are featured on the other side. The butterfly is shown feeding on the nectar of a milkweed plant (Asclepias sp.), a symbiotic relationship essential for both the pollination of the plant and the reproduction of the Monarch. Loss of habitat and associated milkweed plants is the dominant reason for decline of this butterfly. In the background are oak-pine woodlands.

In 2019 the Bank of Mexico issued the new 200-peso bill depicting Miguel Hidalgo y Costilla, the parish priest known as the Father of the Homeland, and José María Morelos y Pavón, known as “Servant of the Nation,” in commemoration of Mexico’s Independence. Pavón was also a Catholic priest and a revolutionary leader in the war of independence, who assumed leadership after Miguel Hidalgo y Castilla was executed.

To their left is La Campana de Dolores (the Bell of Dolores). The bell was rung at dawn on September 16, 1810, in the town of Dolores, Guanajuato, Mexico (known as the “Cradle of National Independence”), calling the population to rebel against the authorities of the Viceroyalty of New Spain. The grito (shout) made by the parish priest, along with Ignacio Allende, a captain in the Spanish army who sympathized with independence, is known as the Grito de Dolores. Every year on September 15, the Mexican president rings the bell, which has been relocated to the central balcony of the National Palace in Mexico City, to commemorate the grito.

On the upper right side, the denomination 200 is multi-colored as it changes between blue and green depending on inclination and lighting. The bill is also friendly to the blind, containing tactile, three-dimensional lines. The opposite side of the bill celebrates desert ecosystems, represented by a golden eagle soaring over the El Pinacate Biosphere Reserve in the state of Sonora.

The $500 Peso Bill
In August 2018, a new blue 500-peso billete was issued, supposedly to fight counterfeit bills (one often sees checkout clerks inspecting 500-peso notes). Both front and back images are horizontally oriented. One side portrays Benito Juárez, the 26th president of Mexico, accompanied by an image of his triumphal arrival at Mexico City on July 15, 1867, symbolizing the victory of the Reformation, the separation of Church and State and the basic principle of equality before the law. Benito Juárez came from Oaxaca, and is Mexico’s only completely indigenous president (Vicente Guerrero’s father was of mixed Afro-Mexican and indigenous descent).

The opposite side of the bill features a ballena gris (gray whale) and her calf, representing the coasts, seas, and islands of Mexico’s varied marine worlds, and specifically the El Vizcaino Biosphere Reserve in Baja California Sur, a World Heritage Site.