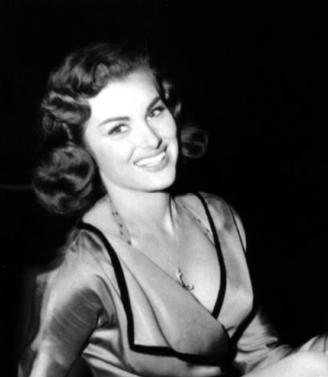 When I first started looking into this 1950s beauty contest winner, model, and actress for this issue, I thought “Hmmm, not that interesting,” but The Eye publisher Jane Bauer explained that Christiane Martel, now 87, is a central cog in a wheel of Mexican culture and politics through her multiple family connections and friends.

Christiane Magnani Martel was born in Piennes, France, in 1932, and is of Italian and French descent. After winning a couple of regional beauty contests, she was crowned Miss Universe in 1953, in Long Beach, California; the title included a movie contract with Universal International studio, through which she played minor roles several films.  Her time in California also included a short (70-days) drama-filled marriage to a department-store heir named Ronnie Marengo.

In 1954, Martel moved to Mexico to pursue her acting career.  It was Mexico’s golden age of cinema, and she quickly won lead roles in a range of films, starting in 1955 with Abajo el Telon (Drop the Curtain) opposite the multi-talented Cantinflas.  Martel and her future husband Miguel Alemán Velasco (son of the former Mexican president Miguel Alemán Valdés) were great friends with Mexico’s movie idol Pedro Infante; Martel was Infante’s first celebrity guest on his 1954 telethon – the first ever in Mexico – to support restoration of the Basilica of Guadelupe in Mexico City.

Christiane Martel’s film career was relatively short but prolific; between 1954 and 1962, she starred or appeared in 32 movies, 17 filmed in Mexico.  Besides Abajo el Telon, her best-known films are ¡Viva el amor!  (1958), Señoritas (1959), and Juana Gallo (The Guns of Juana Gallo, 1961), my favorite, starring María Félix and Juan Aguilar.  I was curious to see and hear how this non-native became such a star in Mexico, and as an aficionado of the Golden Age of Mexican film, I watched a few. Highly recommended!

Although her accent is a little odd (and she admitted in an interview she had a very hard time learning how to roll her ‘rr’s in Spanish), these movies represent a time and a place, and from that perspective are hugely interesting and entertaining. They star only fair-skinned people (with some exceptions in Juana Gallo), and as for the roles of women – well, judge for yourselves.

In 1961 she married Miguel Alemán Velasco with whom she had four children, Claudia, Mónica, Miguel y Carla Alemán Magnani. Alemán, as he is known, and to whom she is still married, is a former senator and governor of the state of Veracruz (1998 – 2004) and is currently on the Board of Directors of Televisa. (Televisa, or Grupo Televisa, S.A.B., known as Univision in the U.S., is a Mexican mass multimedia company and the largest in the Spanish-speaking world). He sold or gave his interests in Televisa to their son, Miguel Alemán Magnani, who is also President and CEO of the airline Interjet.  Martel has described her life as a fairy tale, and that she married the right guy.

Other than a glamorous career that only spanned 8 years, no doubt to become a supportive wife and mother, a famous marriage and super successful son, what else is she known for? During her tenure as First Lady of Veracruz, she supported many worthy social causes including health care and education, particularly for poor and marginalized indigenous groups.